The point of having a therapist is to be able to tell them about what you’re going through in life without judgment. That being said, there are some things that are harder to talk about simply because either you’re ashamed or you’ve gotten some harsh opinions from other people about your choices.

One of those choices that can be universally awkward to talk to your therapist about is going back to that ex. You know, the ex. The one that started your therapy journey to begin with. The one that makes you blast “All Too Well” until your voice is hoarse (the 10 minute version, for the record). The one where you go from saying is the worst person you ever met and thus you’re better off without them to how much you miss them and you’d do anything to get them back?

If you’re struggling to vocalize this and find the right words, maybe we can give you some ideas:

1. “Hey! So good news. I drank a lot of water since the last time we talked. I also made some time for myself and decided to finally start listening to my gut. My gut said to text them back.”

2. Make a meme breaking the news and send it at 3 a.m. with the simple word “Surprise!” Here’s an example: 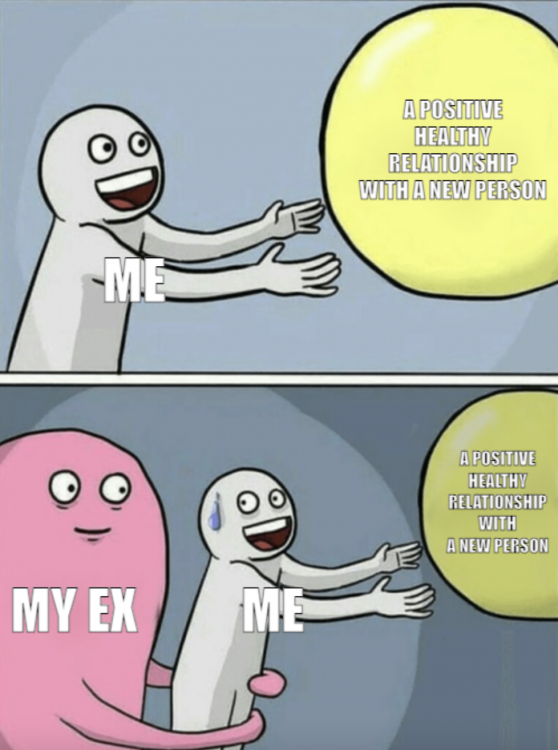 3. “You’re going to be so proud of me. My ex texted me this weekend and I didn’t text back, instead I showed up at their house at 2 in the morning and didn’t leave for three days.”

4. “OK, so pick what you want to talk about first. My debilitating imposter syndrome, the fact that my PTSD was triggered by watching a show designed for 2-year-olds, or that I decided to have sex with my ex even after I said I wouldn’t.”

5. “Good news! Paid off my credit card! Bad news, it was my ex’s money that did it because we’re back together again.”

6. Just send them a link to “Oops I Did it Again” with no context and leave them on read until your next session, after you and your ex stop talking again of course.

10. Just ghost them until you’re off again in the on and off again relationship.

Or you can just be blunt, but wait until the last minute of the session.

At the end of the day, the push and pull of a toxic relationship, especially intimately, can be alluring. While we should be dedicated to growth and doing what’s best for us, sometimes what’s wrong feels right and we do only live once. That being said, always remember your therapist and medical team are there to support you, even through your toxic relationships.

The Mighty’s No Shame community is a safe space to talk about the things that make us feel bad about ourselves and how to overcome those challenges.