27 Unexpected Consequences of Opening Up About Your Mental Illness

Because while everyone deserves privacy, no one should feel like they have to be silent because of shame.

And we’re not even talking about announcing your mental illness to the world. It could be as simple as confiding in friends and family about your diagnosis, how you’re doing and what they could do to support you.

But telling people who’ve been diagnosed with a mental illness can be tricky, and definitely comes with a certain level of risk. We asked people in our mental health community to tell us the reality of what happened when they opened up about their mental illness.

1. “People — strangers, old friends, people I went to school with — start opening up to me about their struggles. I bump into people on the street and instead of being ignored, they say, ‘Hey, I hope you’re doing well.’ I get asked for advice and get told I’m an inspiration to many. Having people feel confident enough to open up to me is one of the best feelings.” — Megan E.

2. “People reached out to me that I never expected to hear from, but I also lost so-called friends. I still feel like sharing my journey is the right thing to do. It’s so frustrating that people understand your heart can get sick, your stomach, etc. but nobody wants to believe or understand that your brain/mind is part of the body, it’s in your body and it can get sick, too. Nobody wants a mental illness but it happens and pretending that it’s not real will never help anyone. God bless to those of us who live it daily.” — Melodie K.

3. “People judge you, don’t care, or feel like you’re overreacting. Support is hard to find, it’s a taboo to this day. People who’ve been through it will support you, but otherwise they don’t.” — Gina C.

4. “The mixed reactions I get. People will start to open up about their own personal struggles and what they’re going through, which I really appreciate because it makes me feel less alone. But I also have people telling me I have no reason to be depressed, or have severe anxiety or take medication for my ADHD because I’m a mother and I need to think of my kids and how all of my problems will affect their upbringing. And when I hear stuff like that (especially if it comes from family) I feel absolutely horrible and like I’ve failed my children, my husband and myself, all because I’m choosing to not ignore my problems and try to treat them.” — Alix P.

5. “I found out that just about everyone I know has been diagnosed or suspects that they too have one or more of the illnesses I have. I realized that they are afraid of the stigma attached to their diagnosis and therefore never spoke about it, and I also found that they are relieved to have someone else to talk to who understands and won’t judge because they are going through it too.” — Desiree N.

6. “Support, even from those I didn’t expect it from. Reassurance that I’m not alone, in that people have shared their similar experiences. Surprise that I internalized it for so long. Some weren’t that surprised, evidently I wasn’t hiding it nearly as well as I’d thought. Concern, but most of all love.” — Elise W.

7. “Some people were surprised when I was first diagnosed with depression because they didn’t think I had anything to be depressed about.” — Erica S.

8. “I was so surprised… and relieved… to find out how many other friends and family dealt with it too. I had no idea. Regular people living mostly regular lives… it made me feel so much better about my own diagnosis!” — Julie B.

9. “Depression, anxiety, OCD and bipolar. I’ve had reactions across the spectrum. I’ve had people cry for my story. I’ve had people hold me. I’ve had people tell me to, ‘Suck it up, and stop pitying myself.’ I’ve lost friends. Most importantly, I’ve made friends, because people have opened up to me and shared their pain. I’ve felt as lonely as I’ve felt accepted, and that’s what’s shocking. Everyone has a different reaction to it.” — Sarah C.

10. “Two words happen the most… ‘Me too.’ There are so many people out there struggling quietly, and I realized that by using my voice in opening up about my struggles, I give others a voice as well. We are all in this together and the more we open up, the more we can see and feel that.” — Jen D.

11. “I felt free. I finally found an outlet for my emotions and decided that I have to stop bottling them up before I broke down (again). I also decided that this is me and if you want to be in my life, you better understand that I don’t have to hide myself.” — Kayla S.

12. “People I thought would be understanding and compassionate seemed uncomfortable whenever I even mentioned mental illness, and they began distancing themselves from me. It hurt so much. Now, I just avoid hanging out with anyone and I don’t bother maintaining friendships because I’m afraid it will happen again.” — Rachel W.

13. “People I hadn’t talked to in a long time opened up to me about their journey with mental health. I’ve reconnected with old friends and we have been closer because of that unspoken understanding. It’s awesome to have friendships that aren’t exhausting to maintain because we both get it.” — Erin W.

14. “I’ve gotten mixed reactions ranging from others confiding in me that they, too, struggle… and then people disregarding my feelings and saying, ‘You’re just having a bad day.’” — Amber B.

15. “Some have been very supportive. People I barely know have become life lines. Sadly though, some I thought I could count on forever have completely disappeared and ignore my calls. It definitely is eye-opening.” — Rhonda M.

16. “Once I talked to friends, family, mentors they didn’t know how to act around me anymore, like something was awfully wrong with me. So a lot of people started to avoid me or was awkward around me.” — Nikki L.

17. “You find out the people who really love you. I was amazed how fast some people who were in my life left. Whether it was because they couldn’t deal, or were afraid, or whatever the reason, friends, some of which I’ve had for years became very sparse after the fact.” — Jeffrey C.

19. “So many people say ‘that explains a lot’… that hurts more than they know. I am more than my illness and my emotions shouldn’t be cast aside as a symptom of my illness.” — Alyss S.

20. “It’s surprising to me that some people don’t believe it’s real, yet turn around and blame me for anything that ever goes wrong because I’m ‘crazy’…” — Diana K.

21. “People change. They start treating you differently. It’s as if you are a walking attraction, when all you want to be is yourself.” — Julie J.

22. “Been struggling with high-functioning depression. I’ve kept this secret forever. I finally told a friend of mine. She advised me to seek help — which I did. She asks me how I feel almost every day. This encourages me to open up to others and to serve as an advocate for mental health. I’m still not ready for it, but I know when I do, it will help others who may be struggling with mental health.” — Ernesto M.

23. “I find more support than I thought I deserve. I try to push my illness back, pretending that it’s not that big of a deal, but it is, and sooner or later I will be reminded of it. And people are so much more accepting of it, of me, than I have ever imagined.” — Alicja M.

24. “I have a semicolon tattoo on my wrist and I have had total strangers come up to me and just ask me to talk with them for a few minutes while they center in a crowd, it’s a really awesome feeling to know that people feel comfortable approaching me even if they have no idea who I am because they know I won’t judge them.” — Amythest Am.

25. “There are so many others out there going through the same thing as myself and they don’t think I am crazy! Then there are others who I’ve known for a long time and they had never experienced anxiety before but out of the blue they started having it and they reach out to me for advice and guidance.” — Niki W.

26. “Oddly enough I started to feel more alone, as if nobody cared or understood.” — Shayna K.

27. “As someone who is all too often told that my mental illness isn’t real, it’s always unexpected to have someone be supportive. The best, and most unexpected thing, is when someone finds out, and all they say is, ‘I’m here for you.’” — Kari O. 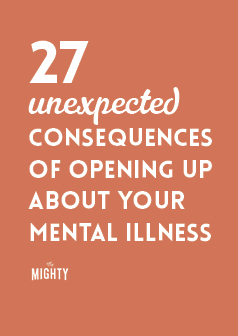