If you’re looking for creative inspiration, check out the Daily Inspirations group on The Mighty.

This story was originally a viral Twitter thread, which you can read here.

Emerson, my 11-year-old, is on a bit of a wild ride with the U.S. Postal Service and our local mail carrier, Doug. And I think there’s a deeper message to it all.

Em has a serious letter writing habit. She maintains active correspondence with over a dozen of her favorite people. And, if you’ve been the lucky recipient of one of Em’s hand decorated letters and envelopes, then you have a pretty good idea of the joy they bring. 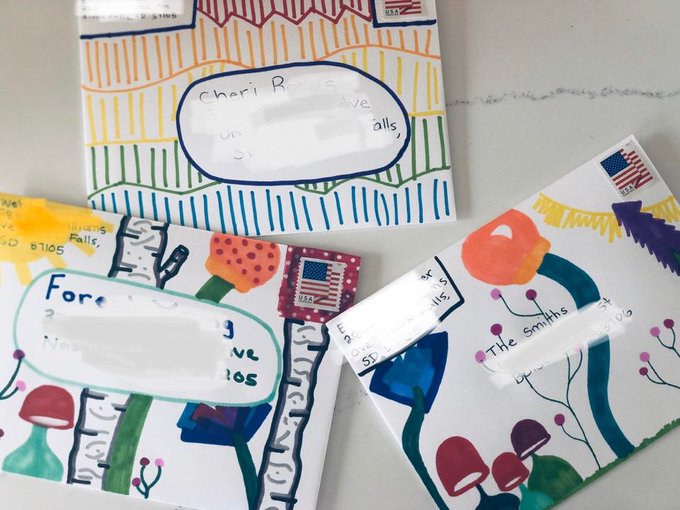 A letter from Emerson is likely to include some art, a joke or two, a mention of her younger brother, confessions of her love for Taylor Swift and enough questions to guarantee a response.

So, when she decided to thank our mail carrier for the service he provides us, she left nothing out. In went Taylor Swift, in went the little brother, in went the jokes.

Q: Why do you never see elephants hiding in trees?

A: Because they’re really good at it.

Em wrote, “I’m Emerson. You may know me as the person that lives here that writes a lot of letters & decorated the envelopes. Well, I wanted to thank you for taking my letters and delivering them. You are very important to me. I make people happy with my letters, but you do too.”

She continued, “The reason you are very important in my life is because I don’t have a phone so how else am I supposed to stay in touch with my friends? You make it possible!”

She put it in the box, smiled when he took it and that was enough. The next day a package arrived with some stamps and two letters. Doug had shared Em’s letter with his supervisor, Sara, and they both wanted to share how touched they were by her note. 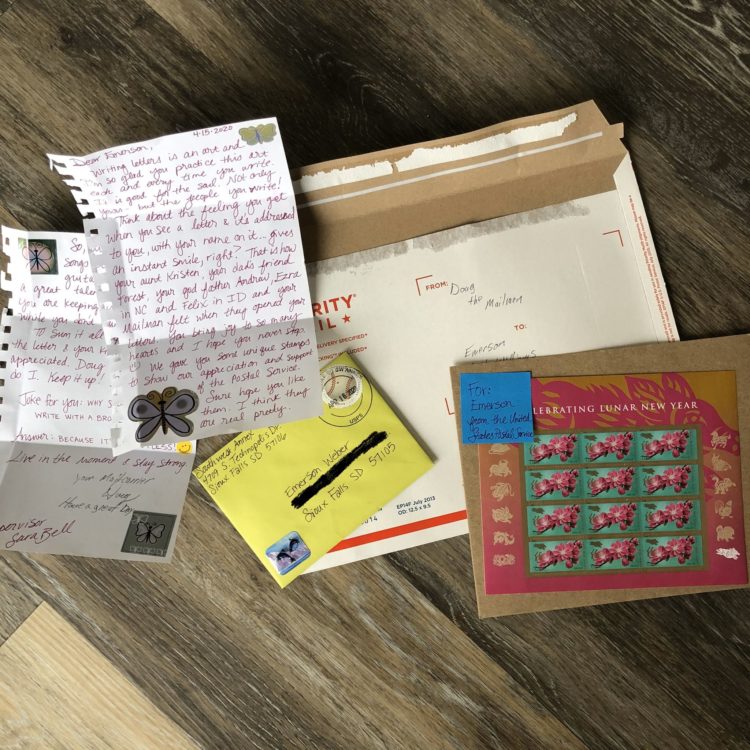 Sara said that, as an essential worker, Doug might not be able to maintain regular correspondence, but she sure could. Em started writing that very afternoon.

This is when things get interesting. The next week, we got a letter address to “Mr and Mrs Weber.” It seems that Sara had shared Em’s note as a “Token of Thanks” in the internal newsletter for the Western U.S. and there were some postal folks who wanted to thank her. 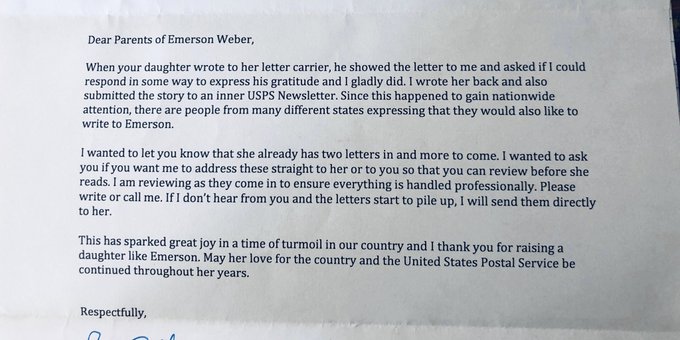 Today, we saw Doug getting out of the truck with two boxes of letters from around the country. We snapped a quick photo through the door as he and Emerson met for the first time. It was a beautiful moment on silent reciprocity. 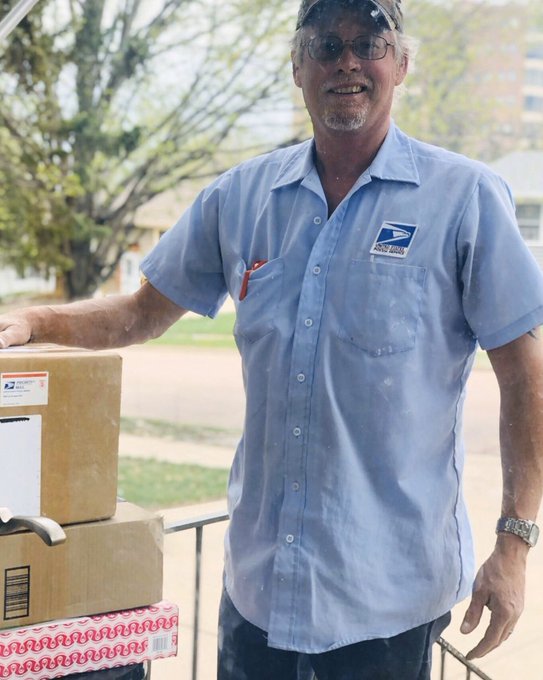 These letters are so deeply human. They are filled with family, pets, hobbies, community and an overwhelming sense of kindness.

Because Em was fully vulnerable, they were too. Em shared jokes, so they shared jokes. Em share her brother, so every gift that was sent came in duplicate. Em shared Taylor Swift and it turns out that the U.S. Postal service is filled with lots of undercover Swifties.

One maintenance manager from Minnesota wanted to inspire her to start collecting stamps so he sent along two stamps of his own from the bulletin board in his office to start her collection. 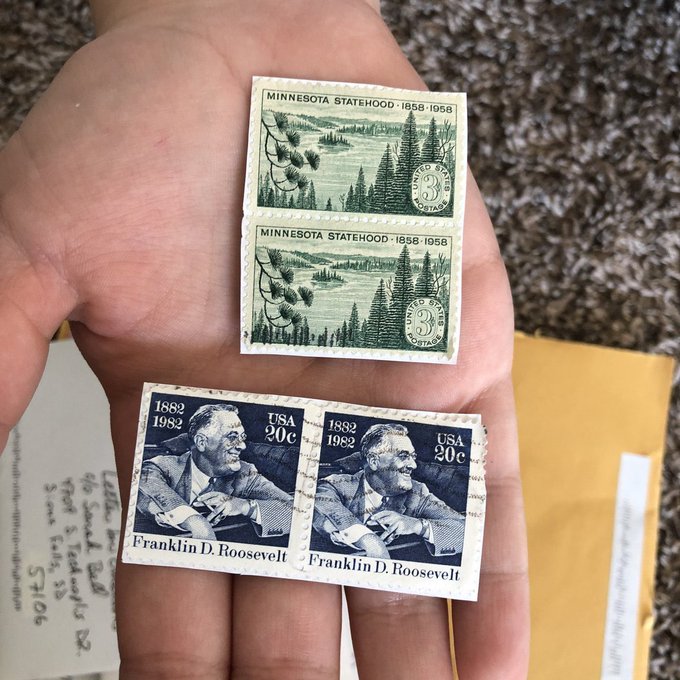 But, there was something more in these letters. People felt seen — some for the first time in a long time.

“I work alone in a small rural post office…”

“My kids all live far away…”

“Not a lot of people think about how hard we work…”

One wrote, “I can’t tell you how much it means to read your letter…”

Another, “I have a son in Kuwait and if you have a second to send him a letter he would love it.”

And another, “I know you can’t write back to all of us, but maybe I can drop you a line from time to time?”

With dozens of new pen pals, Em did what she does best. She wrote the dad. She wrote his son. She assured the secret Swifties not to be embarrassed because her dad likes T-Swift, too. She acknowledged that there were a lot of letters but that she had time. She sees them all. 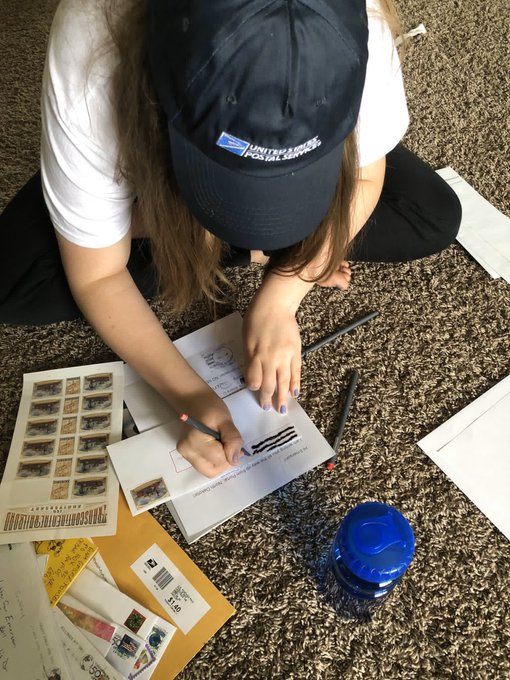 I’m not sharing this because I’m a proud dad. I’m sharing it because it is relatively easy, if we take the time, to give others one thing they need to be well — human connection. I have a friend who says we all just want to be seen, known and loved. Em does this boldly.

It’s Mental Health Awareness Month and I want to be bold and brave like Em. We’re all in a moment of physical isolation that is amplifying a real epidemic of loneliness, anxiety and depression. I’ve been feeling it personally since long before we locked our front door.

In the second week of quarantine, I responded to hundreds of direct messages from creatives who are feeling this disconnect in a significant way. I heard from college students to senior executives who personally and professionally are stressed, worried and/or afraid.

Two weeks ago, I personally started working with a therapist for the first time. For years I’ve traveled the country talking about relationships of influence, but I’ve used that travel as an excuse to not to seek the support I know I need. This pause gave me time to act.

I have incredible family and friends, but the truth is that I needed more. And, sending texts via an app has been the small step I needed. Moral of the story: it’s the small things that matter most, friends. 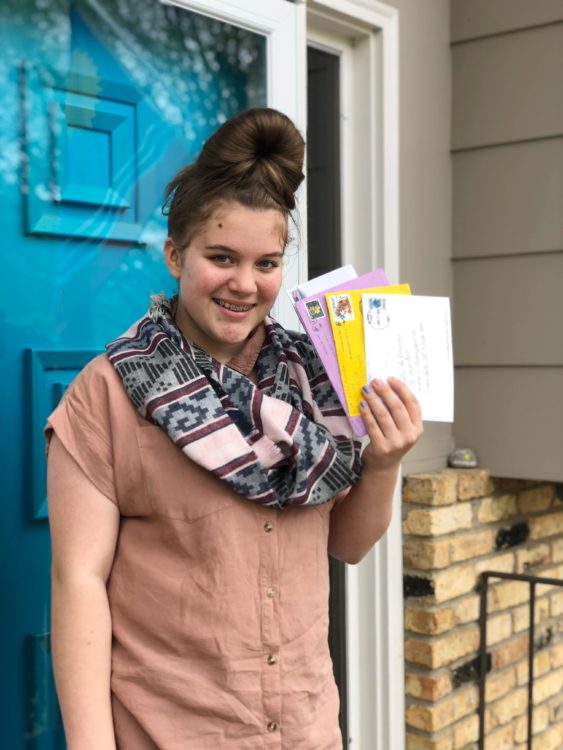 Send a letter. Make a call. Practice self -care. Take a step of boldness. For yourself or for others. And, thank your mail carrier (from an appropriate distance.) They are working extremely hard to keep us all connected.

And, if any of you are feeling isolated, anxious, scared or depressed, those feelings are valid. I’m feeling them, too. And, I’m here if you need me.

All images provided by Hugh Weber