If Working From Home Negatively Affects Your Mental Health, You're Not Alone

In a world where remote work is now the status quo, that doesn’t mean it’s right for everyone. Unpopular opinion: I am one of the people who wants to go back into the office for my mental health.

Even before remote work became the mainstream way of doing things, I knew that I worked better in person. I lean extroverted, have ADHD, and work best when I have a set structure to my day. Having the ritual of leaving the house, arriving at work, and then having other people working around me gets my mind into gear.

Before my current job, I was a freelancer. Whenever a gig offered the opportunity to work from home, it was a challenge. I would freeze at the screen in front of me and drift off into a world of distraction. Next would come a sense of dread, urgency, and executive dysfunction. I felt like I was running in circles. It mentally clouded me, but I managed to always get my work done. I knew that working remotely from home stressed me out more than any commute or office would.

Before I originally accepted my role at the company I am currently at, I was asked if there was anything I may need. “To be in person at the office,” I responded. The person who asked me this question laughed and responded, “I think we can arrange that!” At the time, going into work was the norm, not a perk.

When the pandemic hit, I hoped that working from home would only last between two to eight weeks max. I could handle that. But anything more, not a chance.

Eventually, reality set in, and it became clear the lockdown was going to last longer than expected for everyone. Our company made the decision not to renew our lease on the office. A piece of me lost hope. I knew that working in person together wasn’t going to be a possibility as long as I continued working here.

Some days I was working from the minute I woke up until after 7 p.m. just to prove that I could be productive. On other days, I would stare into the void and struggle to get one thing done.

Making things worse, I was falling back into some bad habits that I hadn’t dealt with in a long time. My negative self-talk when I would make a mistake turned up to full volume in my head. Left to myself, alone in my room, I could stay trapped with my feelings and let them bubble and brew.

Separating my workspace from my home space was vital to my mental health. When the pandemic happened, that was shattered. The connection I craved had been stifled.

It didn’t help that many of my co-workers, friends, and all over social media echoed their own sentiment: Working from home was the way to go. I would watch videos and see posts about people working from home who felt attacked by the idea of going back to the office. 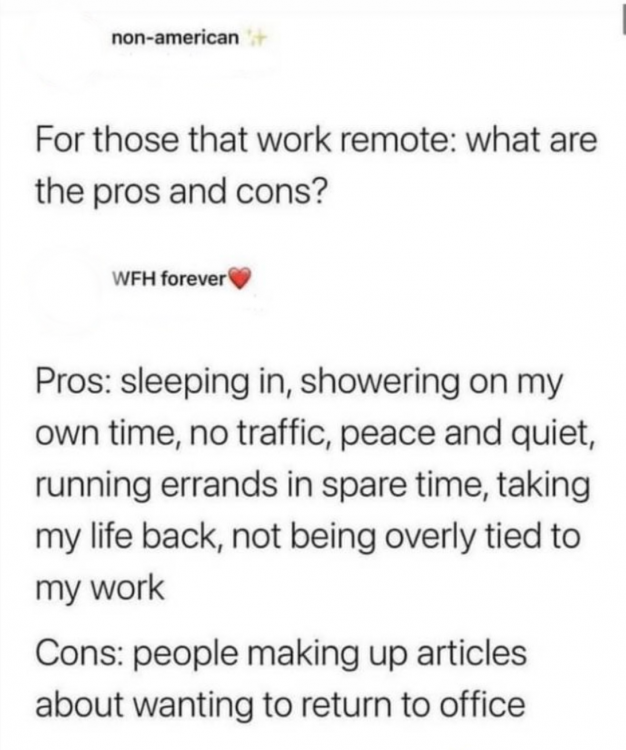 I thought to myself, “Am I the only person who has been profoundly affected by having to work from home?” I felt invisible.

I felt strange for being one of the people who actually wanted to go back to work in the office.

I felt like I was against the grain for wanting what so many people were against.

There had to be other people who understood what I was going through. I started to find out there were people who agreed with my perspective for their own reasons. On The Mighty, some people shared their views.

As things have started to open back up, I have treated myself by occasionally going to co-working spaces. The moment I stepped into one, I could feel a shift in my mood. It was having a destination to go to start my day, seeing the other people around on their laptops in the zone, and observing groups of people meeting to discuss their company projects; it was exhilarating! When I go there, my outlook shifts. I am content, happy, and so much more productive.

For me, work life has more meaning when I have a place to go to work; when I have other people working around me, and a cut off time when I have to go home. That makes a difference for me.

It was refreshing to talk to some of the people at the co-working space at a networking event and find out why they were here. For one person, it was vital to work outside the home away from their partner; for another, it was the opportunity to work around other people. Another cited a lack of morale with their small team working from home. Meeting here once a week changed the team dynamics for the better.

It felt validating to hear that I wasn’t alone and to meet other people who felt what I had been feeling.

I don’t believe that my need to be outside of my home for work to be my most productive should be for everyone. I am not suggesting that those who work better at home need to work at an office.

I recognize that working from home has benefited many people. That includes those with certain disabilities, health conditions, and those who find they are most productive working on their own in their own space.

Working from home has given opportunities to more people to work jobs that they wouldn’t be able to if they had to go into the office. To those, I say that’s awesome and that remote accessibility must stay available.

I believe we can have both and that is something I am willing to fight for on both sides.

We need to find a way to create a narrative where everyone’s work and mental health needs are heard. Because no matter what side of the coin you fall on, you aren’t alone. Your mental health matters when it comes to how you work best.

Which is better for your mental health, working around other people, or working from home?

Tell us in the comments below.