Television shows have become an essential part of our everyday world, and they bleed into everything from social media posts to hilarious memes to conversations with our coworkers and friends. Unfortunately, this puts a lot of pressure on folks to watch the most popular shows, like “Euphoria.” As millions of people excitedly awaited the Season 2 premier of “Euphoria” last week though, Zendaya shared an important message on Twitter.

The actress, who stars in one of the show’s leading roles, reminded everyone of the show’s serious nature before offering these words: “Please only watch if you feel comfortable. Take care of yourself and know that either way you are still loved and I can feel your support.” 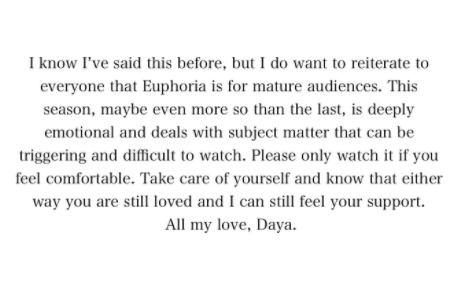 Although trigger warnings have become far more commonplace in the years since “13 Reasons Why” made headlines for its potential impact on teen suicide rates, messages like this from show frontrunners are far from the norm. However, it’s definitely something that fans appreciate, especially for those of us who live with mental health conditions.

Most people feel like they need to “fit in” with their peers, but I think this feeling is intensified for anyone who lives with a mental health condition because they may already feel like an outcast. Because of this, we push ourselves to do things that jeopardize our well-being, like going to crowded nightclubs or watching television shows with content that’s difficult to digest. We know it’s not beneficial for our health, yet we do it anyway. But why?

Well, because we don’t want to feel like we’re “weak” or “less than” because we prioritized our needs over a television show.

I can’t even count the number of times I felt pressured to watch something that, in retrospect, was not conducive to my mental well-being. Sometimes, like with specific episodes of “Grey’s Anatomy,” I was at least able to find some benefit to watching — even if it also caused some short-term problems. Other times, like with “13 Reasons Why,” I pushed through the first season even though I knew it was wrecking my mental health, and I later regretted it. The entire time, I told myself that I had to watch because “everyone was doing it” and “nobody else is struggling to watch it.”

Your mental health matters much more than understanding a vague television show reference in a meme. In fact, it matters more than supporting your favorite actors or engaging in water-cooler conversations at the office on Monday mornings.

Only you know your limits and your needs, which means you are the only one who can really make the right decision when it comes to prioritizing your health. That being said, messages like Zendaya’s can help you feel more confident in your decision to avoid potentially harmful content, and that confidence may be just what you need to feel justified in your decision.

I think if more actors and actresses were this transparent and validating, people would be far more apt to prioritize their mental health over so many things.

Perhaps Zendaya’s Twitter post will be the start of something new, or maybe it won’t — it’s hard to say. But for now, I hope we can all hear her message loud and clear and implement it in our own lives. It’s OK to start a series and never finish it because you found the content too difficult to digest. It’s OK to only watch certain shows surrounded by safe people in a safe space. But most of all, it’s OK to avoid certain shows for the sake of your mental health. Pop culture comes and goes, but prioritizing yourself never goes out of style.

Hi, I'm Megan, a Community Leader here at The Mighty who also runs the "BPD Safe Zone" group. I'm very open about my struggles with Borderline Personality Disorder and other mental health conditions because I hope that by sharing my story, I can help erase the negative stigma surrounding mental illness. Besides writing, my daughters are my life. I love board games, traveling, and large quantities of ice cream. You can follow my personal journey at Living On The Borderline, or check out my writing on The Mighty, Thought Catalog, Unwritten, Thrive Global, Moms, and Project Wednesday.