Three years ago I was happy, healthy, and thriving as a fashion, media and tech insider. Dizzying New York nights unfolded, giddily over glasses of champagne, laughter, and friends. Between work and a bustling social life, dull moments were savored and celebrated for their quiet and calm. Then one cold November morning I awoke dizzy, unable to focus on the world around me.

Soon facing relentless tests, doctors appointments, uncertainty, and losses greater than I ever could imagine, I entered a world unlike any I ever experienced before. Unable to visually focus or walk down a hallway, I left my career, certain that I would be able to recover within a few months and return to the life I once enjoyed. After a few months of unknowns, MRIs, blood work, and all sorts of uncomfortable poking and prodding, I was diagnosed with vestibular migraine and chronic migraine, with brainstem aura and status migrainosus. Simply put, I was dizzy all of the time, and most of the time I felt like I had little to no control over my body. Something as simple as a music bass would render me useless, unable to walk or speak. Grocery stores overwhelmed me with vertigo and aphasia. New York’s constantly changing weather left me vacillating between pain and exhaustive recovery.

In the beginning I was unable to leave home or the safety of my Brooklyn neighborhood, a place where I had successfully habituated and informed my shop owners of my dizzy condition. I created a safe place where I could maneuver and live independently. At first friendships were supportive and kind. People helped me navigate the subways so that I could make it to physical therapy, friends met me for a cozy dinner or joined me at the gym. But over time, familiar faces diminished, and I watched their lives blossom into the life I once had and wanted to regain. It’s not their fault – they were living while I was stuck in the ellipsis familiar to those with chronic illness. Eager to change my future, I resolved to leave my New York life behind and seek a gentler life on the West Coast.

I did my research. I carefully studied neurological hospitals, barometric pressure changes, and walkability scores before deciding upon Santa Monica. The decision was impulsive, desperate, but informed.

“Focus on health first, then find a job,” I reminded myself again and again. So, I sold my belongings, packed up my clothes, and flew my two tiny animals to the west coast. We found a mid-century modern apartment by the ocean, a place where I could savor the ocean breeze and still take the bus to UCLA hospital when needed. 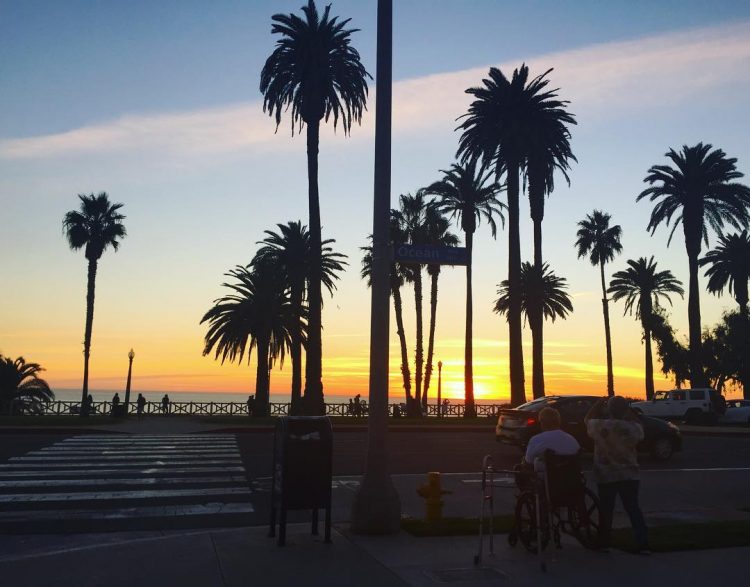 Convinced I could move away from my conditions, I arrived determined to return to normalcy as quickly as possible. Regrettably, the body doesn’t work that way, and I became even more isolated by geography and circumstance. Los Angeles is a vast city, made vaster by its serpentine traffic systems and inefficient public transportation. Friends who I thought would be a part of my life simply live too far away. Then I got worse.

My neurologists always imagined that fibromyalgia was tied to my chronic migraine condition. Diagnosed with fibromyalgia as a teenager, I had learned to live with the condition simply by ignoring it or plastering pain spots with Salonpas and Biofreeze.

Now incapacitated by a cruel mixture of migraine and fibromyalgia symptoms, I was face-to-face with anxiety, neurological symptoms, widespread pain, and aphasia. Some days I was OK, while other days were spent prickled with allodynia, numbness and the inability to move my legs. I dived head first into diets while seeking camaraderie in Facebook support groups. Aside from the company of my animals, most days have been spent alone, passively watching my friend’s lives progress. I searched for volunteer opportunities, only to be rejected because I don’t have a driver’s license, due to dizziness and vertigo. I applied for jobs as a shop girl in the promenade but never received a response.

The good news is that I’m getting better. This month I’ve only suffered three acute migraine attacks, far lower than my usual average of 25 to 30 days per month. I trust and respect my neurologists, rheumatologists, specialists, and therapist. Botox, a strange mix of medications, a ketogenic diet, meditation, and a steady sleep schedule work for me. I’m improving. The dizziness that once overwhelmed me with its hallucinogenic qualities has abated, and now I mostly am struck with light fatigue, muscle weakness, and tinnitus.

Now that I’m recovering, I want nothing more than to work, to be part of a team, and to contribute to society. Isolation now is my worst side-effect. I submit applications into the LinkedIn void, hoping to be considered for positions far below my previous pay grade. I attend classes at General Assembly and visit my gym during its busiest hours, hoping to make a friend. I text local friends and sometimes receive responses, most of the time days later, telling me that they’re really busy, or that they’re super tired.

We’re programmed to believe that illness is temporary. You take a pill, share your Z-pak or photos of your horse pills on social media, tweet-beg for someone to send you chicken noodle soup before recovering and returning to the natural fold of life. But chronic illness isn’t that linear or simple.

If I socially shared every time I took a pill, my social media feed would resemble a small pharmacy. If I socially shared every time I felt under the weather, my feed would be filled with sad-face emojis and grimacing selfies. My meal tableaus would be dedicated to a static repetition of the same three meals every single day. So I plug on, hopeful that one day I’ll be accepted back into the world of the living. I apply to at least 10 jobs a day, hopeful for a single bite.

I’m thankful for my family, who have supported my move and have helped me through troubling, anxiety-riddled times. I call recruiters, asking them for updates and leads. How could someone so successful now be so irrelevant? I continue to invite friends to do things, knowing that they’re too busy living their own lives. I’ve accepted that I’m now a satellite friend, the person who you think about in passing. I don’t like it, but I’ve accepted it. And I hope to change it.

cannon-hodge
Want more of The Mighty?
You can find even more stories on our Home page. There, you’ll also find thoughts and questions by our community.
Take Me Home