What You Can Learn From the Scariest Day of My Life

May 12 was the scariest day of my entire life.

My mother called me on my cellphone while I was at work and told me my son, Ethan, wasn’t acting right. His lower body was ice cold, and his upper half was on fire. He was going in and out of consciousness, and his eyes looked swollen like half moons. I told her to put him in the car and meet me at Winchester Hospital. She ended up having to pull over on the way there and call 911. A friend from work drove me to Winchester, and I sobbed the entire way. Ethan’s dad flew down from New Hampshire, and as soon as the ambulance arrived at the hospital, they took us to his room.

I saw about seven people around Ethan. I took one look at him and lost it; he was pale as a ghost, moaning, and every muscle on his body was twitching. When he did manage to get something out, it was gibberish. I just kept yelling, “Help him! Somebody help him!” Ethan’s eyes were glazed over, and he continued to twitch. The ER doctor said Ethan needed to be transferred to Mass General. As we waited for the ambulance, I stood over my son, rubbing his head and crying. I had no idea if he could hear me, but I told him how much I loved him and that he’s the funniest, happiest little boy I know. My mind was racing, and I kept thinking, Please, God, don’t take him yet. He has so much more life to see. He isn’t ready to go. I’m not ready to let him go. It’s not supposed to happen like this. I expected more warning. Please don’t take him.

The ambulance arrived. I felt like I was in a dream. I was lightheaded. All I could think was that Ethan was never going to wake up again and if he did, he wouldn’t be the same.

At the hospital, Ethan’s eyes remained half open. He already looked better and recognized me. Part of the neurology team came down and asked a bunch of questions over and over again. They said it didn’t sound like a seizure, but they ordered an EEG just to rule it out. One of the residents asked what Ethan’s official diagnosis is and when I told her, she said she’d never heard of it. All I could think was, We are in a world renowned hospital and we are teaching them about a disease. Shouldn’t it be the other way around?

We waited all day as Ethan had blood drawn and an EEG done. He slowly became more and more alert, and we knew he was on the mend when he farted and laughed. He loved having Doritos fed to him and that he got to drink Sprite. He asked so many times to go home. Every time a nurse or doctor came near him, he cried or told them to go away.

Finally the results came back; they found no seizure activity and all his blood work was normal. We still have no clue what happened. Maybe progression of his diseases (muscular dystrophy and leukodystrophy) or just a one-time thing. I’m praying it’s the latter. We were able to take him home, but we have to go back to the neurology department soon. They upped one of Ethan’s medications and told us to call 911 if his mental status changed again.

Ethan and I were up all night. His body wouldn’t stop moving, and he couldn’t stop talking. He became aggressive a few times, which is not like him at all. He finally fell asleep for a few hours, and when he woke up, he was pale and his arms were having tremors. I held back tears as he tried to feed himself cereal and couldn’t even get the spoon in his mouth. He looked at me as this was happening and said “Mom, I just need patience.”

I was taken aback. It’s true; if he wanted to feed himself independently, he would need extra patience today. He wouldn’t let me feed him, and it took him over half an hour to eat a small bowl of cereal. I had to refill the bowl a few times because a lot fell on the floor, but he finished his Frosted Flakes. He’s slowly getting back to himself, still weak and shaky but he’s still laughing at everything. 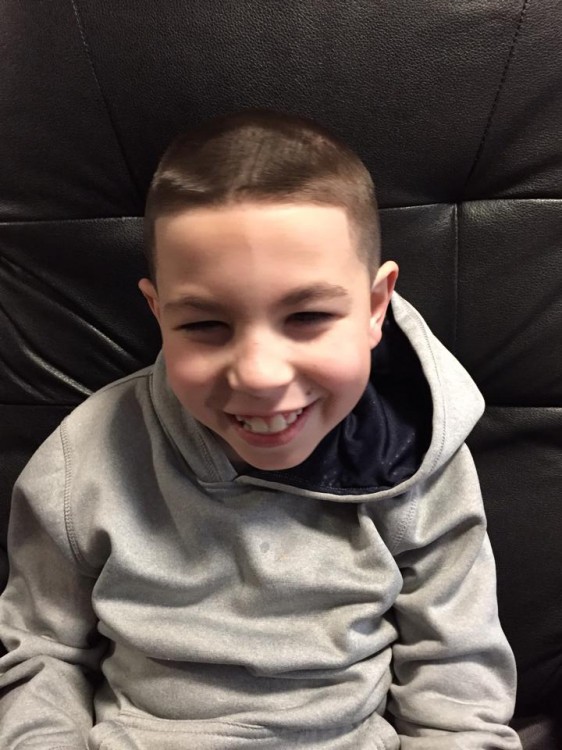 When people tell me they’re sorry this is happening to us, I tell them not to. There’s no reason to feel sorry. Feeling sorry is not going to change our situation. All I ask is that you enjoy your kids, your family and your friends. Tell that person you love them. Hug and kiss them. Do what makes you happy. Leave that dead-end job, leave the wrong relationship. In the end, just make sure you are happy. Life is so short. Life is precious. Every breath you take is amazing. Be thankful when you wake up every morning. Ethan is happy no matter what his situation. He knows how to live. Wake up and look around you. Make sure you are truly living and not just going through the motions of life.

Jennifer is a mother to two beautiful children, a special educator, photographer, painter and graduate student. Her 8-year-old son has two rare disorders, Leukodystrophy and Congenital Muscular Dystrophy. Her 11-year-old daughter is determined to become a researcher at Harvard University to find a cure for her brother&#8217;s illnesses. Jennifer resides just north of Boston with her children and boyfriend.

jennifer-sousa
Want more of The Mighty?
You can find even more stories on our Home page. There, you’ll also find thoughts and questions by our community.
Take Me Home