I Live With Neurofibromatosis, but That's Not What Gives Me Life

Megan Ross is a Peace Corps Volunteer currently serving in southwestern China. Megan blogs about her travels at Megs the Wanderer.

I stepped off the light rail into the damp afternoon. A man who had been on the same train from downtown Portland remarked about the drizzle that lightly fell. I smiled.

“I like your smile,” he said, “I hope you don’t mind, when I first saw you, I wanted to feel sorry for you.” He motioned to his face, referring to the disfiguring tumors on mine. “But I see life in you. It’s in your eyes.”

Two days later another tumor appeared on my face – one more to add to the bunch, an even more disfigured face to endure.

Some years later I walked into a branch of the Seattle Public Library, killing time between work and another engagement. A sudden gasp caught my attention. She was maybe 14 years old. She stared, pointed at me, and whispered something to a friend, who responded, “Don’t be rude.”

These are two out of many encounters with people, most of whom are only curious about my disfigured face.

I’ve always known about neurofibromatosis (NF). My mom has NF1, and with my café-au-lait spots, the diagnosis was made early on. The first neurofibroma tumor appeared when I was 13, though now I’ve lived with disfigurement longer than without. I have dozens of tumors all over my body, and through the years I’ve had three surgeries along the right side of my face and ear canal.

Every morning I wake up and look at myself in the mirror. Sometimes I’m ready. Sometimes, however, I have to talk myself into stepping outside to face the world.

Back in college, while discerning my future career, a mentor asked me, “What gives you life?”

After much thought, I identified life-giving activities and decided to pursue them. Running, helping others, traveling – these are among the things that give me life and help me to carry on when I feel frustrated with NF. I’ve been a runner most of my life. In my mid-20s I ran marathons, even joining the NF Endurance team several times. I also worked in homeless shelters and helped people connect to housing resources. When I yearned for something different, I taught English for two years in a remote area of North Sumatra, Indonesia.

I felt the call to go abroad again, this time as a Peace Corps Volunteer. Currently, I serve as an English teacher for college students in southwestern China.

Before I left the United States, the last thing my neurosurgeon said to me was, “I have no concerns, have a great time!” He ordered an MRI for me and signed papers necessary to serve in the Peace Corps.

Grateful for his support, I was still nervous that NF1 and tumors might mean a denial to serve. I sent his notes, the MRI and hearing test results, and other paperwork from an ENT and other doctors to the Peace Corps medical office. Several weeks passed. When I received the news that I had been medically cleared, I was more relieved than excited. Without access to an excellent team of doctors, I probably wouldn’t have been approved to serve.

I’m now more than halfway through my two-year commitment. In addition to teaching English majors, I’ve given lectures about social work, sociology and education in the US, plus engaged in numerous opportunities to share culture with my Chinese students and colleagues. I also enriched my family and friends with stories about life in a part of the world they’ve never been. These exchanges have been among the most rewarding times of my Peace Corps experience. 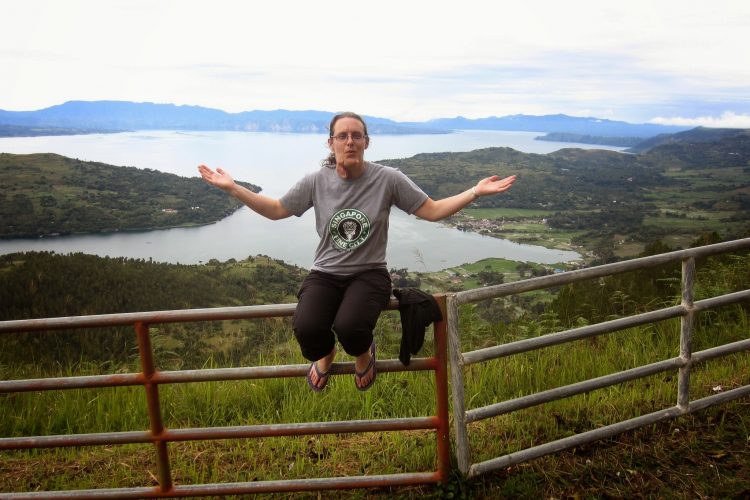 Every day in China is a challenge – from learning the language to a full teaching schedule to navigating a different culture – but challenge is nothing new to me. Just as I live every day with NF, I serve abroad with courage and equanimity.

I’m unsure what’s next after my service ends next year. Wherever I go, I’m sure there will be stares and occasional ridicule, like the teenager in the library. Rather than dwell on that, I reflect on the stranger who, instead of feeling sorry for me, looked at me and saw life. NF-related tumors will indeed keep on coming; nevertheless, what is most important to me, is to keep on living. And in doing so, I want to live in a way that encourages life, not only in myself, but in others as well.

This post originally appeared on the Children’s Tumor Foundation blog.

The Children’s Tumor Foundation mission is to drive research, expand knowledge, and advance care for the NF community. Our vision is to End NF.

childrens-tumor-foundation
Want more of The Mighty?
You can find even more stories on our Home page. There, you’ll also find thoughts and questions by our community.
Take Me Home