How a ‘Fluffy Catalyst’ Impacted My Daughter’s OCD

This story has been published with permission from the author’s daughter.

She always wanted a dog. From the time she could speak, every chance she got she would ask if she could have one. The answer was always “no.” We had no room for a dog in our small apartment. Every time she’d see a dog on a walk she’d ask the owner if she could pet it. She loved dogs and wanted her own so badly.

In 2012, a few months before she turned 10, we bought our house in the South Bay. It was around that time we began to consider becoming dog owners. It was also around that time that her worries began. Worries that would turn into obsessions and six years later full-blown debilitating obsessive-compulsive disorder (OCD.)

By early 2013, we had found a breeder with a litter of Golden Retriever puppies for sale — her wish was about to come true! Two tiny male puppies were available, both fluffy and cute, one slightly smaller and darker in color than the other. We decided to name him Eddie. I brought her along to meet both puppies so she could pick the one she liked the most… this task proved to be overwhelming:

“What will happen to the one I don’t pick?”

“What if I pick the wrong one?”

“What if something happens to it?”

“What if I end up hurting it?”

“What if I do something to it and it dies?”

She decided on the smaller, darker one, and I was supposed to pick him up 10 days later — but she couldn’t stop ruminating over her decision. Maybe the lighter one was better? What if she would regret her decision? Over and over and over.

At the time, my husband and I didn’t understand what was really happening. It all seemed so silly! She was about to have the puppy she had always dreamed of, and it was causing her this much distress? Really?!

Over the next few days, her fears of picking the wrong dog were replaced by fears of hurting it, which then morphed into fears about hurting her brother, her dad and me. This is typical OCD thinking — but we didn’t know that then. This is how a “normal” brain attempts to prevent us from putting ourselves or others in harm’s way. It sends us thoughts warning us of potential dangers and awaits our response. This is fight-or-flight response testing in full effect. If we respond with fear or panic, our brain will assume it’s “onto something,” that potential danger is real, and it will send us more thoughts to respond to. Unless we stop reacting to these thoughts, they may keep coming and they can continue to evolve. A person with OCD may believe all warnings are to be taken seriously…

We took her to see a therapist who asked her if she would feel better “if mom hides all sharp objects from you”… Wow! Didn’t see that coming!

She was now terrified of getting the puppy while the rest of the family was beyond excited. But there was no way she was going to talk us out of it. I figured if I just went and got the dog and surprised her, she would instantly love him and drop all the worrying. I was partially right.

She did fall in love with Eddie immediately, but she asked over and over, “Which one of the dogs is this? Is he the one I chose? Is he the darker one?” The color of the dog’s fur had become a huge obsession for her. Life-or-death huge. OCD compulsions are not always visible and physical like hand washing or checking or cleaning things. They can also be mental ruminations, avoidance or constant reassurance seeking. Hers was primarily a need for certainty. Between obsessing about the color of the dog and seeking reassurance constantly, her OCD was starting to grab a hold.

So I told her what would be the first of a thousand lies I would tell as her disorder got worse over the next five years. I told her that both dogs actually were the exact same color, but one had been “dirty” the first time we saw them, which made him look darker. I know how silly this sounds, but she was 10, and she trusted me. There was no reason for her not to believe me. And her worrying about the dog ended.

Of course I know now that one of the most important strategies for overcoming OCD is accepting uncertainty as a part of life, but in that moment, I didn’t know she had OCD, I didn’t know what the right thing to do was, I didn’t know the lies I’d be telling her moving forward would make her worse and strengthen OCD. I just wanted my child to be happy and enjoy her dog… so I lied. Don’t all parents tell little white lies?

For a while, she was doing well. But over the next three to four years, OCD and anxiety showed up in many varying themes. Many times, in the midst of her struggles I would ask myself if I somehow, inadvertently, of course, had brought all of this on. Did asking her to choose our dog — something that meant so much especially to her — somehow flip a switch in her brain that activated OCD? Could all of this have been avoided? I hated myself for ever involving her in the decision.

By early 2018 her OCD peaked and became debilitating to the point where she needed help with basic things. Her compulsions had become so extensive that the list would be too long to write here. And I was heavily involved in many of them. I had to quit my job to care for her. Another eight months would pass before she was accepted into an intensive outpatient program and things began to turn around. Today, she’s in a much better place and stronger than I’d ever imagined.

Some people are able to identify a specific moment or trigger that catapulted them into OCD hell. Others aren’t. The disorder can just sort of develop over time. Our family knows exactly when OCD was awoken. But as its theme evolved, there’s no doubt in my mind that it would have found a way into our lives with or without Eddie. It was only a matter of time.

Despite the fact that Eddie joined our family during tumultuous times, through the really tough times, he became a source of great comfort to all of us. He may have been the catalyst that set all of this in motion, but ironically, he also helped heal her. He caused her so much stress initially, but he ultimately became a soft place to land and the companion she’d always dreamed of. Today, they share a very special bond. He didn’t judge, he showed no frustration — he just wanted to love her as only dogs can. When things were bad and OCD told her she couldn’t hug us, she would sob into his fluffy fur and hug him tightly. In the end, things were better with him than without him.

She always wanted a dog, and I’m so glad she got one. 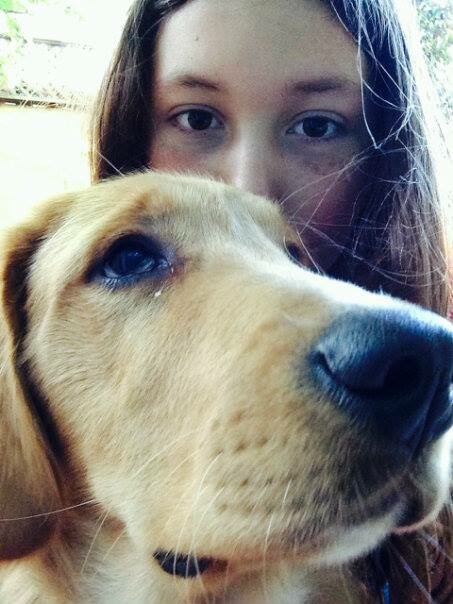 I’m a parent of a teenage daughter who suffered from severe OCD since the beginning of 2018. Her illness began with anxiety in 2013. Her OCD themes have changed many times but eventually she got ‘stuck’ with intrusive thoughts about pedophilia and incest which ultimately caused complete debilitation. After completing a 14 week Intensive Outpatient Program she’s almost fully recovered. I write about my experience as the parent of a child with a highly stigmatized and misunderstood disorder. I’ve published articles on IntrusiveThoughts.org and Scary Mommy as well. My goal is to bring awareness to the darker themes of OCD. I’ve come to realize that most people think OCD is about perfectionism, order and neatness when in reality for so many people it is about horrific thoughts they can’t control.

birgittehunt
Want more of The Mighty?
You can find even more stories on our Home page. There, you’ll also find thoughts and questions by our community.
Take Me Home