Those double lines came at one of the hardest times in our marriage. We were sinking financially. We were still trying to find out if our daughter, Adelaide, was terminally ill. If her condition was deteriorating. If we were carriers of some disease.

I couldn’t fit into any of my clothes for a Saturday wedding. So I jokingly took a Friday night pregnancy test. And it was positive. We were shocked. And when I should’ve been thrilled, I immediately started thinking of all the things people would say.

We had already heard from loved ones and strangers alike who said we had the perfect little family. One boy. One girl. A girl who needed so much. In seemingly nice ways, and horribly insensitive ways, we heard the opinions about our family being complete. No more room for anymore Ballews.

As I stood in that kitchen smiling and laughing and crying with my husband, I already felt my joy being stifled. I was fearful of the looks and comments that I knew were coming.

When Adelaide turned 1, we were still waiting for our second opinion on her MRI. We were still a couple months away from meeting with a pediatric neurologist, the one we hoped would have some answers.

While we waited on the doctor’s opinion about our baby’s brain, opinions about my uterus were still pouring in: “You’re done having kids after that one, right?” and “You already have one healthy kid. Don’t test your luck.”

The opinions crossed over from the cultural obsession with one boy/one girl to this unhealthy obsession with never giving kids with disabilities younger siblings.

So many people think they have the answers for me and other moms in the special needs community. And it’s almost worse when you’re in the undiagnosed club. Too many variables. They forget that any child at anytime has the potential for glitches in the DNA. And that perfect babies don’t exist.

And this lie that a woman can’t have another child after one is born with issues causes us to put some of our joy on the back burner.

I think it’s wrong to tell a woman who is raising a child with special needs that she no longer has the option of more children and that a child with disabilities can’t be a big sister. But I wasn’t brave enough to say these things when I was pregnant with my third.

When we announced our pregnancy, my imagined fears became reality. I rarely heard a “Congratulations!” without a comment like “Are you worried it will have disabilities, too?” or “Well, you know this one’s your last, right?” or “What are the chances it won’t be healthy?”

I always had witty responses, but I never the courage to say them.

I also lacked the courage to tell our new neurologist that I was already pregnant with a baby we hadn’t planned on. At all. “You may decide to have more children someday after doing all the genetic tests,” he told me. I just kept my mouth shut. He didn’t see my baby bump because I was hiding it. I wasn’t emotionally ready to be judged by one more person.

As I sobbed on the way home about Adelaide’s appointment, our news about polymicrogyria and the realization that there was no cure ever for our sweet daughter, I just held my small baby bump. Dave looked over and said, “Every single baby comes from a messy gene pool. It’s a crapshoot. But we’re in this together.” He thought I was fearful for Baby Ballew’s future but I wasn’t.

No, I was fearful for mine. I was doubting my ability to parent this surprise. I was so sick from growing a human and breastfeeding another. And it seemed like more proof that the lies I kept hearing were true. I was in over my head. I could barely mother two, but now I would have more kids than hands. I gave into all the comments from man when I believe I should’ve been listening to the Holy Spirit.

Bess was unexpected. She wasn’t planned by us at all. But she was dearly loved by us from that first pregnancy test. And I believe she was loved by God before we even knew about her. How I wish I could go back and silence my inner chatter and all the naysayers.

Now I often hear, “Three? You’re done, right?” or “You’ve got your hands so full you would never even think of a fourth, right?” or “Guess you’re done! Where would you put another one and push a wheelchair?” I just smile and walk away if the person seems sweet and nosy, and I give my “teacher look” if the person is rude and needs to quickly walk away for everyone’s safety.

But if we do, I won’t make the mistake I made with Bess. I won’t listen to all the people who share their opinions, well-meaning or nasty. I would proudly show off my baby bump, shout from the rooftops that another blessing is on the way and ignore the comments about making Adelaide a big sister to another sibling who will eventually pass her up.

It’s hard slaying the idols of pleasing others and being accepted. But I won’t stop trying. I owe it to my kids to celebrate them to the fullest. 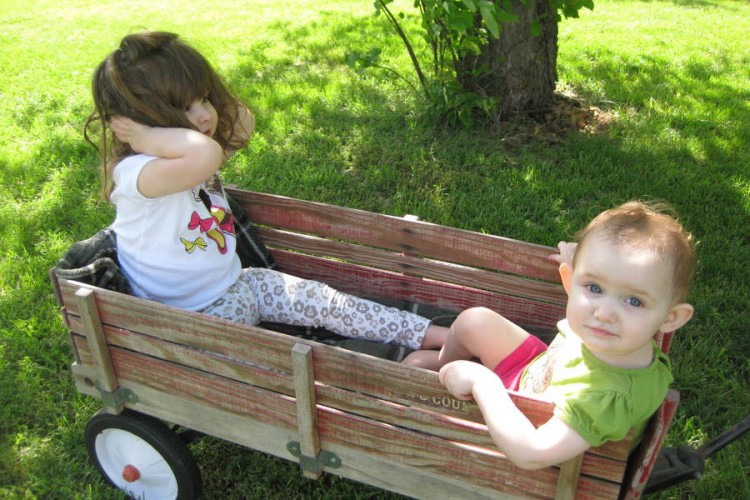 Follow this journey on Little House in the City.

Lyndse Ballew is a Mrs. and mommy raising a toddler with polymicrogyria and sharing about her family of five at Little House In The City: theballews.wordpress.com

lyndse-ballew
Want more of The Mighty?
You can find even more stories on our Home page. There, you’ll also find thoughts and questions by our community.
Take Me Home