Four nights ago, I sat in my daughter’s hospital room trying to rock her to sleep. She had just gone through three different tests and six hours of anesthesia.

My daughter doesn’t have cancer or a life-threatening illness, but she’s medically complicated. Medically complicated is the term doctors use when your child has a lot of medical problems. They use it when they see something is wrong, but they don’t know exactly what.

We spend a lot of time in and out of hospitals, doctor’s offices and therapy appointments. We worry a lot about about her because she has plenty of symptoms and several diagnoses, but there’s no one thing that explains all of it.

I second-guess myself every day and wonder if we’re doing all we possibly can for her. But at the same time, I wonder if we’re doing too much. Are the tests we let the doctors run worth it? Will they actually find something this time? Should we just stop and hope things will eventually get better? It’s hard to know, and these are the thoughts that plague me every day. What is the right choice?

As a parent, you just want to do the absolute best for your child. Sometimes that means figuring out what’s wrong and fighting for them; other times it means waiting things out. While I’m not sure if there’s really a “right” answer, there will always be that voice in the back of my head asking, “But is it enough? Are you doing enough?”

We sat there in the pre-op room, our nerves all over the place, waiting for them to take our daughter back. The nurse asked us to list all the times she’s been under anesthesia. I paused. My daughter had been under so many times I had forgotten. I wondered if that made me a bad mom. How does one lose track of something like this? I named all the times I could remember: surgeries, a laryngoscope, multiple endoscopies and more. 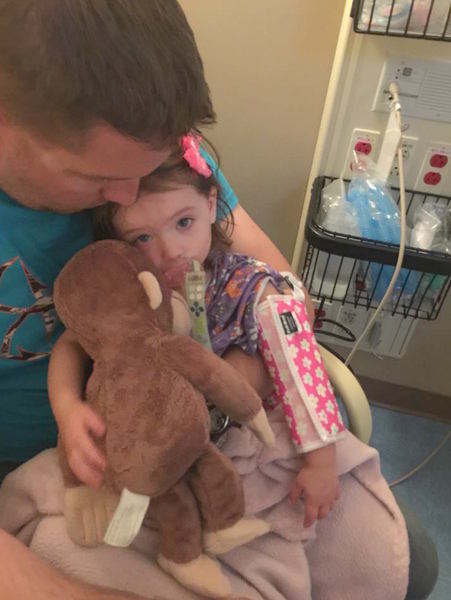 Later, we all walked back to the operating room where they preceded to try and put her under. Daddy was holding her, and she was fighting the mask that would put her to sleep. After what seemed like an eternity, she was asleep, and they took her from our arms. The doctor told us to give her one last kiss, and it took everything in me not to openly weep.

Throughout the afternoon, I had flashbacks of all her other hospital stays. All the other times where they took her from me to put her under. The one that stays with me the most is the time they did two surgeries at once. She was only three months old, and giving up control of my sweet baby to those doctors and nurses is something I will never ever forget.

If I had the words to describe what it feels like to be a parent to a medically complicated child, I would say that it feels numbing. Numbing because you’ve been through so many procedures, so many hospital stays and so many surgeries that you just start to go through the motions. There’s no time to cry and no time to really let yourself process it. You just do what you have to do.

While there are good days and bad days, I’d never wish for a different child. I wish I could take away the hardships and everything she’s been through. I wish it had been different for her, but I pray with each passing day that things will change, and I thank God for the blessing of my little girl.

As I walked into the hospital the next night to go pick up my daughter from her sleep study, I thanked God that her eighth hospital stay was about to come to a close. I breathed a sigh of relief and prayed that maybe, just maybe, this would be the last time.

Kathryn is a Christian military wife and mom to two special needs kids. She blogs at www.singingthroughtherain.net about marriage, military life and special needs motherhood. When she’s not blogging, she loves spending time with her family and making new friends!