They were happy back then and enjoying a relatively carefree life.

Together for years but recently married on a whim, they could have had pretty much whatever they wanted, go wherever they wanted … without ever having to think twice.

But look closer into her eyes, and you’ll see there’s something missing. 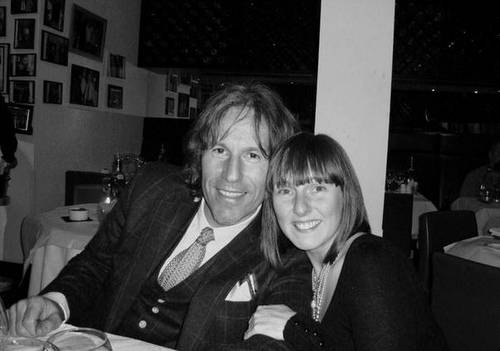 Something that money couldn’t ever buy. It was something she so desperately wanted. She’d hidden the feelings so well that no one could have ever known. She never spoke about it, because it wouldn’t have made any difference even if she had. It was pointless.

The medical profession had made things very clear: This couple would never be able to have a child. So they just got on with their lives and made the most of it, because that’s all they could do. They didn’t have many options. And life was good.

However, little did they know that there were actually three of them in that photograph.

Their little girl was waiting to meet them.

The medical profession had got it so wrong.

Several days later, they found out that they were going to become parents. To say it was a shock would be an understatement. So after a relatively easy pregnancy, Hannah arrived. Minutes later, their lives were flipped upside down and they were thrown into scary and uncertain world (you can read more about it here).

Plan A would have been the usual scenario for most average couples enjoying the glow of an impending birth. After maternity leave, mama would go back to work, baby would go to the nursery and things would be relatively the same as they were before but with more responsibilities. There would be children’s parties to attend, ballet classes and sleepovers. There would be a quest to find the best education possible and to save up for college.

Dreams and aspirations were now shattered into tiny pieces. There was no Plan B. None of this had been anticipated. So what happened next?

Once life had settled down to their new “normality” (the word “normal” isn’t usually used in their house), they just got on with things and made the most of it. Nothing and no one could have ever prepared them for caring for a child with profound additional needs. It would put immense pressure on their relationship. This little bundle of gorgeousness would completely dictate their lives, probably for the rest of their lives.

There would be no spontaneity whatsoever to do anything at all. Life would move at an entirely different pace … a very slow one.

There would be no more drinking wine and listening to music into the early hours. Bedtimes were strictly adhered to because nasogastric feeds would need to carried out throughout the night. Because of the unpredictability of nighttime illnesses, sleep would become immensely precious. Every outing would be planned like a strategic military exercise.

There would be no “date nights” because there would be no babysitters able to care for Hannah. Relationships would be strained because life would be cluttered with appointments, tests and meetings. There would be no emotional energy left to rekindle the relationship they once had. Any holidays would initially be on hold. Later, they would need careful consideration, and cases would be packed to cover every eventuality.

When she looked in the mirror, she didn’t recognize herself. She had lost her identity, but eventually she got some of it back.

Most conversations held would revolve around Hannah. They would both need to review how the family unit could function effectively and then try to muster some semblance of the life and relationship they once had.

They’d learn very quickly who their true friends were and who they could rely on for support — and they were few and far between. They would see, with much sadness, other people’s relationships fall apart through the stresses and strains of caring for a child with additional needs. They’d prioritize their child. Nothing and no one would ever be able to sway them from that. Together they would make decisions and comfort each other on the dark days.

No one could have ever prepared them for any of this and no one would ever understand unless they’d walked in their shoes. But they adapted, not just because they had to, but because they wanted to.

And while their lives have been flipped upside down, their hearts almost broken several times and their previous life now unrecognizable, we are still happy now and we make the most of the time we have with our extremely precious and inspiring little girl.

The Mighty wants to hear more about relationships and special needs parenting. Can you share a moment on your special needs journey that strengthened your relationship? If you’d like to participate, please send a blog post tocommunity@themighty.com. Please include a photo for the piece, a photo of yourself and 1-2 sentence bio.

Mykidlovesbroccoli.wordpress.com charts the journey and adventures of Hannah, who has a rare genetic syndrome called Cornelia de Lange syndrome, but whose favourite food is broccoli (hence the title!) and the experiences and observations of her extraordinarily proud mama – who isn’t a writer by any means, but just wanted to “have a bash” at blogging.