When You Feel Like a Wallflower in the Special Needs Community

I will never forget sitting with our neurologist in one of a dozen identical rooms with that geometric wallpaper following a chair rail around the perimeter. All three campuses have that same paper and somehow incorporate it into remodels and new construction. The design looks like something from my childhood. Do they have a stockpile? Do they special order it? He asked about my daughter Adelaide’s new words since our last appointment. As we started listing off the new words and how they sound, his face stayed compassionate. But I could see what he was thinking behind his eyes.

Twenty-something slurred attempts at words that may or may not even have meaning to her. In six months. “Mama, she does well for being nonverbal.” Nonverbal? Suckerpunch. But she counts and sometimes mimics and says, “Eat!” But I already knew she was nonverbal. I just wasn’t using the word. I had intentionally not even whispered the label.

It was like getting the wheelchair. An admission of something I was secretly hoping would change overnight. When we were wheelchair shopping, I actually said to my husband Dave, “We don’t need to get something that grows with her. She’s only going to use this for a short time. She’s not going to need it long-term.” And Dave gave me the same look. The “oh honey” look. He put his arms around me and I just stayed there, finally admitting what I knew was true. “She may never walk. And if she doesn’t, I should get a chair that can grow with her.” And I found a chair, since we had to pay out-of-pocket anyway, that could grow with her until she hits double digits.

And then even strangers asked, “Does it grow with her?” and my answer of, “Yes, it does. We were blessed to find one,” rolls off my tongue, while my brain shouts, Can’t anyone else believe with me that she won’t always need it?!

Then I posted in a Facebook thread about Adelaide being nonverbal and someone responded that she wasn’t truly nonverbal because she says some words. I deleted my comment and instantly felt like I was without a camp. My daughter doesn’t talk. She occasionally says things she hears. She sometimes lets me know what she needs. But she talks less than her baby sister does. She isn’t verbal, but she isn’t nonverbal to a community of women who will never hear “Mama.” And I have heard it.

A message from a woman I had never met confirmed our outlier status. “Don’t say Adelaide is nonverbal. My son has never said one word. He has never said my name. He is truly nonverbal. I read your ‘blog’ and saw that Adelaide talks. You don’t belong here.” Her choice of punctuation around the word blog was the cherry on top.

We don’t belong anywhere. Adelaide uses a wheelchair, but she can crawl. She is nonverbal, but she says “Hi!” She uses a bottle, but she holds it herself. She can count by 10s to 100, but she won’t stop trying to eat stuff out of her diaper.

For now, we are part of the sign language community. Even though Adelaide has minimal hearing loss. We invest daily in learning signs. Practicing our alphabet. Finger-spelling. Because we don’t know if Adelaide will always be nonverbal, but she is now. And has been for three years.

We have a substantial library of sign language resources and have invested in new materials every tax return. We also used our tax return money to buy our long-term wheelchair. And that’s our season. Buying things we may need for one year or a lifetime.

And we are special needs wallflowers. Up against that outdated wallpaper. But still making it work. And “blogging” about every awkward step. 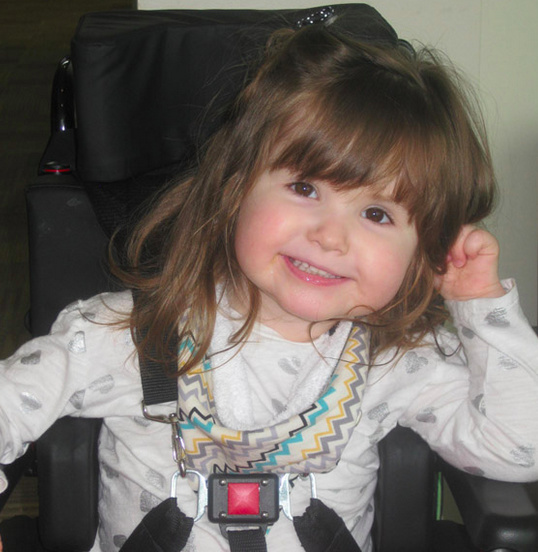 Follow this journey on Little House in the City.

Lyndse Ballew is a Mrs. and mommy raising a toddler with polymicrogyria and sharing about her family of five at Little House In The City: theballews.wordpress.com

Save
Conversations 22
We use cookies and related technologies to help identify you and your devices, enhance your experience and conduct advertising and analysis. By choosing "Accept", or by using this site, you are agreeing to our use of cookies. You can read more about how The Mighty uses cookies in our Cookie Notice.
Manage Choices
Accept