My vision of my child’s first days never involved neonatologists, isolettes and a weight measured in grams, not pounds and ounces. You weren’t in those visions, either, so in the beginning, you were a terrifying reminder of how wrong my baby’s birth has gone.

It felt like an eternity before I got to see my son. My partner, Arick, placed me carefully into a wheelchair, hung my pain pump on the IV pole and slowly wheeled me to the double doors where the tiniest, most fragile patients were housed. In his first day as a father, he became an expert at the only two things he could control: calling you every 15 minutes to check on our son, Avery, and scrubbing in and standing helplessly at his bedside.

The first time I set eyes on all of him, you came to tenderly change his diaper, which was no bigger than a packet of gum. His little corner was dim but for the single light shining down on him, illuminating your hands as you took his temperature. I’d never seen anything so delicate as either my son or your hands as you touched him.

Your words would bring me the first comfort I felt in nearly a day. He was stable and breathing 21 percent oxygen. It was you who explained to me that night what room oxygen, TPN, the vent, the six IV pumps and all of the other overwhelming things meant.

We stayed for a while. I was weak and still very sick, and you were there with us until we left. It wasn’t until I was back in my bed in my own room that I realized your only patient might have been Avery. I was stricken with the thought that you were given the unlucky job of watching, and waiting, to see if he’d survive his first night in this harsh world.

Over the course of Avery’s four-month stay, I witnessed the same thing occur before my eyes with other babies. I saw you, worn, the concern evident on your face. I watched you care for a baby like it was your own, knowing this child’s time might be coming to an end. It was in those moments that I realized how strong you were. How you can face every expectant family’s worst fears and still go on. You’ve been with families as they said goodbye to their precious child, and the next day you’re back knowing you could be doing the same thing. I believe during those four months I saw the scariest, most heart-wrenching aspects of what it means to be a NICU nurse. I probably experienced a great deal of them firsthand. But I know in my heart I’m wrong. I can’t imagine what those moments are like. I’m just glad you were there for those families. I’m just glad you were there for us.

It was you who taught us how to feed our 2-pound baby. It was a daunting task. You wrapped him tightly in two receiving blankets and showed us how to remove him from the isolette safely while he was attached to wires. You showed us how to get him to suck and how important it was to support his chin. You facilitated the thing that saved him — eating.

You taught us how to stimulate him to breathe when he forgot to and showed us how to read the monitors, especially how to recognize the false alarms. When we watched him stop breathing and almost lose his fight, you sat with us nearly all night. You were there in the darkest moments when fear outweighed all other emotions.

Then again, you were there for the good days, too. When he gained weight for the first time, you wrote on his board in big bold print: 1 pound, 5 ounces. We walked in, and the first thing we noticed was that enthusiastic note. You took his tiny footprints on his 1-month birthday and created beautiful keepsakes for us. It was you who gave us that knowing smile the first time we walked into level 2 to see our newly minted “feeder and grower.”

And it was you, every single one of you, who came to us the night he went home to say goodbye. You told me to dry my tears. You said we’d do fine. I wondered why you had so much faith in us. Now I know why you knew we’d make it. It was because everything we knew we learned from you. 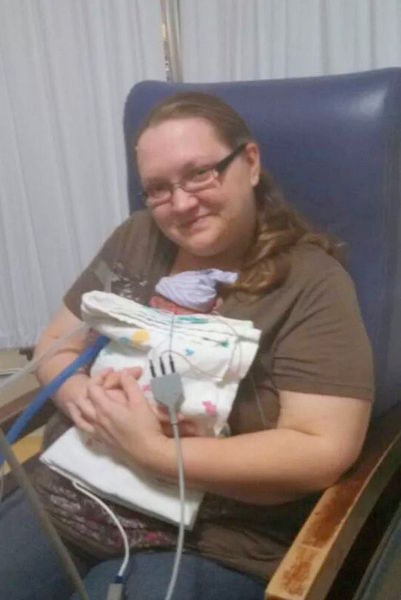 You held my baby before I did. You touched his thin, red skin long before I could. You took mercy on me and let me hold him for the first time at 6 weeks old, still vented, knowing it was a burdensome task and that he might not tolerate it well. It was the only time I held him until a month later when he could be fed, and it was the single most precious moment of my life thus far.

You knew our son’s cues, his likes and dislikes. Before I knew enough to know him, you already did. Each night we walked out those doors and left a piece of ourselves there with you. We called at all hours of the night, and you never got tired of telling us he was “just chillin’.” You cared for him like you would your own. Thank you will never suffice.

When I think of Avery’s early days, you stand out because your presence was so strong. You saved our son. You were exactly what our family needed.

To the ladies and gentleman at Clear Lake Regional Medical Center NICU,

Thank you for doing what only you could do. To the families of sick babies, it means the world. It equates to their fears being eased, intimidating medical terms being understood and trust being built. You did all of this, and so much more, for my family.

The Mighty is asking the following: Write a letter to anyone you wish had a better understanding of your experience with disability and/or disease. If you’d like to participate, please send a blog post to community@themighty.com. Please include a photo for the piece, a photo of yourself and 1-2 sentence bio. Check out our Share Your Story page for more about our submission guidelines.

I am Mom to 16-year-old Abby and 7-year-old Avery. Avery’s premature birth at 25 weeks and consequent cerebral palsy and polymicrogyria diagnoses were my catalysts into the world of special needs. I am an avid reader, writer and a two time preeclampsia survivor. If I’m not at my computer, I’m likely off creating something!