I feel like people toss around the idea of bravery a lot when they are talking about children with medical challenges. And as I am lying here in a hospital crib at 4 a.m., pinned under my sleeping daughter, Ezzy, unable to sleep myself, this is what I find myself thinking about: What does it mean to call Ezzy brave?

Ez has been sick these last few weeks. We’d kept her home, working carefully with her wonderful pediatricians’ office and home care team to keep her out of the hospital. In the last week we’ve spent no less than seven hours over four days in the doctors’ office. But Esmé took a little turn, and we decided she needed to be seen in the emergency room yesterday. This meant routine work-ups — chest X-ray, IV placement, catheterization, blood draws, exams by a half-dozen doctors — as well as some simple things that are really tough for Ez, like fighting to see in her throat, something that is difficult as a result of the medical trauma she experienced as an infant. Looking in her throat requires coaxing/prying open her mouth with a tongue depressor and a subsequent coughing/retching/spitting up routine. So far we know she has two viruses, and we are also treating her with antibiotics until we have more information about potential/suspected bacterial infections.

As I think about today — and really, any day — I know my daughter is certainly one of the bravest people I know. She stares down things that can make adults weak in the knees. Many times I have watched Esmé go through frightening things, painful things, challenging things and just somehow manage not to be wrecked by it — even as her mama wants to curl up in the corner and cry.

Sometimes, I realize it is just that she doesn’t know any different. Esmé doesn’t know that all kids aren’t regularly subjected to these kinds of awful procedures. This — hospitals, doctors, procedures — it’s normal to her (although, mercifully, it’s far less frequent lately than in the past).

This is the problem behind talking about how brave kids are who go through things like this. Because they are so often so brave — at least they often seem to be so brave — and it is a pretty humbling thing to watch. It puts all kinds of other things into perspective. But also, and this cannot be emphasized enough, Ezzy is just a kid. All the other kids who are sick? They are also just kids. Each of them. Kids whose hospital trips should be “that one horribly scary time we had to go to the ER,” not “the ER: the place where everybody knows your name.”

Talking about the bravery of kids who are sick isn’t a bad thing, but sometimes it masks the things people don’t want to think about: kids’ suffering and the undeniable reality that some kids suffer. And it is so wrong. But it is also true. I believe it is true and real for Esmé — even though she cannot say it, even though she has no choice but to go through it.

Talking about the bravery of kids like Ez can diminish their experience of pain. I know this because it is one of the things I tell myself when, like yesterday morning, I hold down her jumping, fighting, sneaky arms and legs so she doesn’t get loose and dislodge the IV being threaded through her delicate veins. I say this over and over to myself to make me feel OK: She’s so brave. She’s so brave. She’s so brave.

And she is so brave.

But it isn’t her job to be the one whose bravery is biggest in the room. She’s allowed not to be brave.

It’s my job to be brave enough to allow her to be scared. 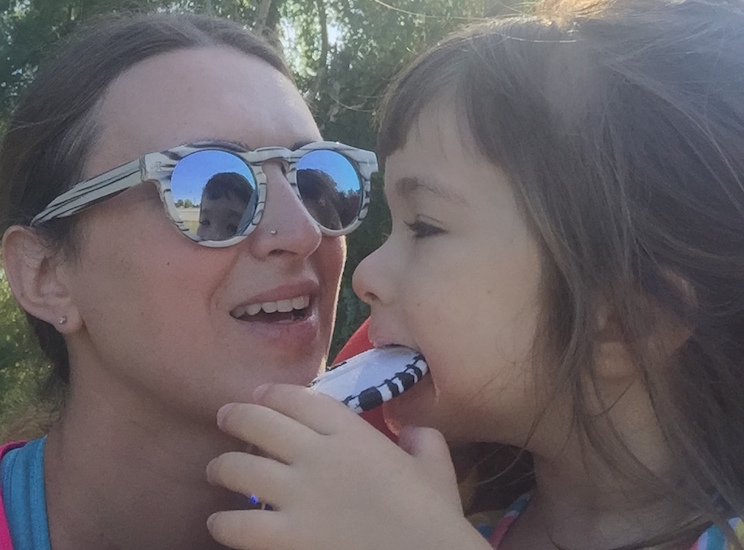