Coping with my baby’s hip dysplasia wasn’t easy at first. She was x-rayed when she was exactly 4 months old. Two days later, our general practitioner (GP) called and referred us to the hospital pediatric department. The doctor looked at the x-ray and said our daughter had severe hip dysplasia. She was put into a brace right then and there.

Two weeks later, we saw a specialist. Our daughter had lots of x-rays and appointments tracking her development since. It’s been a difficult, emotional journey. My daughter was in a brace 24 hours a day, seven days a week for three months. Then she graduated to wearing the brace 12 hours at night, with it off during the day, for another six months.

Today, my daughter is 2 years old. Her left hip is fine, and her right hip is still 4 degrees off. She is no longer wearing a brace. The hope is that running and playing will help her hip right itself the last little bit. If my daughter’s hip doesn’t correct itself, she will need a surgery to fix it and will be casted afterward. The doctor is waiting until she is 4 or 5 to give her hip a chance to come right. We have graduated to yearly check-ups to track her progress.

What is hip dysplasia?

Briefly, hip dysplasia is a condition present at birth where the hip ball doesn’t fit into the hip socket properly. The socket isn’t formed right and the ball slips in and out. Our daughter’s hips were both severely off what they should be. The brace holds the hips at a 90-degree angle, and that helps the bone to grow into the correct, rounded shape. In some cases, a cast is used first and a brace after.

Starting at the beginning:

Our GP was concerned at the 6-week check-up. She felt my daughter’s hips slip when she moved them. She referred us for an x-ray for when my daughter would be 4 months old. I Googled it and found signs and symptoms of hip dysplasia that you can check at home. I did the tests, and her two hips seemed the same. Little did I know that was because both her hips were affected! I went into the x-ray thinking everything was fine and they were just being super careful.

The GP said they were concerned. Still, when we went to the first hospital appointment, I never expected they’d put her into a brace, let alone that day. After receiving the news, I sat and cried waiting outside the plaster room. I was worried for her, what it all meant and also how I’d manage her in a brace. My mind couldn’t process it all. Luckily, the nurse who fitted our daughter’s brace was kind and sympathetic. She showed us how to put it on, take it off (for diaper changes only) and adjust it. As you can see, the brace has three straps and some padding to hold her hips at the right angle to develop the hip sockets. 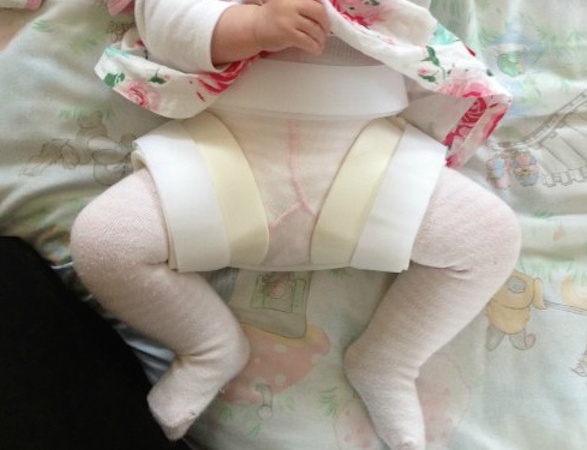 Two things stood out to me immediately when we got home. First, there was now a barrier between me and my baby. This was heartbreaking to me. Rationally, I knew she’s still my same beautiful baby, and I knew that this was what was best for her. But, that didn’t change the fact that emotionally, holding my baby didn’t the same anymore. Second, the brace had hard, pokey Velcro and metal pieces sticking out all over the outside of it. They dug into my arms, leaving marks, and the Velcro pulled my clothes and created pills.  Not only was there a barrier to holding my baby, but the barrier was painful. 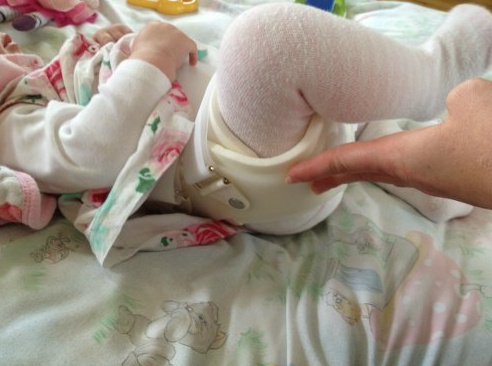 I tried a couple ideas to minimize the brace discomfort until I discovered putting a diaper/nappy on the outside of the brace. I used Huggies Size 6 because they were the best fit. They stretch out and cover the full of the brace. This made it more comfortable for me to hold my daughter. There still was the feeling of a barrier, but it was getting more bearable and I was getting used to it.

Breastfeeding was tricky the first few times. Her leg was up in the air and seemed uncomfortable. I would put the nursing pillow between her legs to support them, and she would lie slightly on her back rather than curled into me. This was also heartbreaking as snuggling in for a breastfeed was important to both of us. She could no longer lie side by side with me.

The car seat was also an issue. I had to buy a new one that was wider to fit her brace. Luckily she fit in the high chair we had. There were lots of considerations, and things I had once taken for granted became difficult.

The brace sticks out at the lower back. So when my daughter laid down flat, I was afraid the brace would dig into her back and be uncomfortable. For playtime, I folded a duvet in half for her to lie on, so it would be nice and soft under the brace. The first few nights she kept waking up because she couldn’t get comfortable. She was used to sleeping on her side, and now she was restricted to her back all of the time. I put a blanket under her fitted sheet to make it softer, and she began to sleep again.

For girls, a pair of tights or leggings inside the brace works really great  because they are smooth and don’t bunch up. I think if my daughter was a boy, I’d have put him in leggings too because they were the handiest thing for under the brace.

The most difficult aspect of the brace was my daughter not being able to move as much. She was an active baby and had rolled over before she was 4 months old. After the brace went on, she was extremely restricted. After a month when she was used to it, she started to wiggle around a bit and was able to sit up in the brace. I tried to keep her entertained with different toys and different surroundings.

It was the happiest day ever for us when the doctor reduced the brace time to 12 hours a day. I’ll never forget leaving the hospital with my daughter brace-free. She had her legs stretched in front of her in her stroller. I’m grateful her hip dysplasia was diagnosed and treated when she was little. I’m hopeful she won’t need future treatment.

If you have anything to add, I’d love to hear it in the comments.

Becky is the founder and writer at the positive parenting and lifestyle blog, Cuddlefairy.com. She’s a wife and stay-at-home mom to three kiddies. Becky shares her stories, recipes, parenting tips and much more on her blog and on Cuddle Fairy‘s social media networks. Cuddle Fairy‘s motto is: there’s positivity around every corner.