Unless you’ve experienced it, it can be hard to imagine how brutal — and how physical — experiencing a panic attack really is. While those experiencing one for the first time sometimes think they’re having a heart attack, panic strikes differently for different people, exists on a spectrum, and no two panic attacks are the same.

So when you want to explain to others what it feels like so they can really understand, metaphors are a great way to get people into your head.

To collect some handy metaphors you can use when describing your panic attacks to others, we asked people in our mental health community to share how they would describe theirs. You might find an answer that resonates with you.

1. “It’s like walking down the steps and missing the bottom step. That mini ‘heart attack’ feeling. But it stays with you all day. Every day.” — Laura S.

2. “It feels like I’m holding my breath while underwater. When I try to come to the surface and breathe in more air, my lungs are unable to expand. Instead, I continue to struggle to breathe. Once the attack passes, I finally get some air, but it is still not nearly enough.” — Katie W.

3. “It’s like you’ve suddenly become receptive to any and every small/insignificant stimuli you thought you could never be affected by. Whether it be the sound of a door creaking or a dish breaking, everything seems much more magnified and difficult to control.” — Muhammad H.

4. “You’ve been running down a dark tunnel for miles, but you haven’t moved an inch.” — Andy C.

5. “For me it’s like a crushing weight on my chest while my heart feels like it’s going to jump right out of my body, my blood feels like it’s a raging river coursing through the veins of my whole body, my head pounds like someone is using a jackhammer on it, I’m suffocating and all the while my brain won’t shut off.” — Monika S.

6. “Like being squeezed through a very small, very tight rubber tube. You can’t hear, can’t breathe, can’t see. It’s just you with the overwhelming darkness struggling to break free and see the light again.” — Brittany D.

7. “It’s like that moment when your stomach drops when you’re at the top of a roller coaster, but the feeling doesn’t go away. It stays there, making your heart race, your thoughts spiral out of control, your chest hurt and blood pulse in your ears. It feels like you’re going to die. Logically you know you aren’t dying, but your mind won’t respond to logic.” — Jane C.

8. “It’s like driving for me. I can be going along just fine — watching my mirrors, my blind spots, other cars in passing. Then I see a car ahead of me and it’s going considerably slower than the flow of traffic, so I glance over to switch lanes, but there’s a car beside me. So I start to slow down, looking at my other side. That’s right — a car is there, too. I slow down more and my heart begins to race a little. Not only do I not like having to slow down, but not having a back-up plan to avoid it gets me a little worked up. But there I am… slowing down. And then, that car starts to brake… quickly… suddenly… so I brake quickly… and suddenly. That’s when I look up at my rearview mirror and see a semi-truck bearing down on me at full speed. He’s yanking his horn with one hand and shifting down with the other. And I know… I just know… I am going to be sandwiched between the car in front of me and the semi behind me. I close my eyes, hold my breath and wait for impact. But the truck never hits me. But the stress is so high and my heart rate is beating so fast that sometimes, I think it would be easier if the truck did hit me.” — Melanie S.

9. “Like my skeleton is trying to escape through my skin.” — Jessica L.

10. “Perhaps like you’re in a space shuttle and the door opens, you don’t have your oxygen. You are having trouble breathing, can’t find your air. You’re searching and searching, you see the black endlessness of space. Are you going to find your oxygen, or end up in the void.” — Lindsay G.

11. “Like losing one of my kids at a public place. My son was 3 when he once ran off while we were raising one of those parachute things at a large family friendly event on a military base. For 10 minutes, there was this immense pressure on my chest, heart racing, empty pit in my stomach, my mind going a million miles an hour, everything turning into a blur… Later on experiencing panic attacks, that’s the experience that comes closest.” — Jason T.

12. “When I feel like ‘a bag full of angry bees,’ that’s when I know a panic attack is coming. I become restless, cannot concentrate, even feel itchy; like, if I didn’t have skin, I would just buzz off in a million different directions. Then comes the shortness of breath, heavy chest, etc. The panic. Sometimes I cry. Sometimes I appear completely unbothered, but inside I’m screaming and dreading death.” — Chrissy C.

13. “Like you’re watching a horror movie you’ve seen a hundred times, but it still scares you stiff. You know what’s coming but you can’t skip it.” — Stephen M.

14. “Like having a full-grown elephant sitting on your chest, while you’re pinned down underneath it. After a little while, your hands and feet go numb and cold, and your head starts to swim. You want to move, but you can’t. You’re stuck there, forced to endure it — ride it out — wait.” — Stine S.

15. “For me it’s like when you wake up from that dream where you’re falling and your body jolts awake and you aren’t sure whether or not you’re in danger but your body is saying you are. Your eyes are darting, it’s hard to breathe and your heart is in your throat. When it comes to calming down from one, I one time heard someone say, ‘It’s like you’re trying to peel a potato with another potato, but everyone else thinks you have a peeler and can’t understand why you can’t peel the damn potato.’” — Megan H.

16. “It feels like having an itch on your whole body while walking on a tight rope hundreds of feet up in the air. You want to explode out of your skin, but you don’t want to move to avoid losing the little balance point you have, and you can’t get distracted scratching a spot because you need your entire focus to get across to the end.” — Helen H.

17. “Like hundreds of people asking you questions and screaming at you. I don’t know the answer to any of them. I cover my ears but the voices remain. Now they are telling me how silly and worthless I am. I curl into a ball and pray and cry until they diminish. Afterwards I feel like I have been beaten I’m sore and tired and can’t move.” — Tamera M.

18. “A panic attack to me feels like I have lost control of my own body, like when you’re playing a video game you have no experience with so you just button mash hoping something will work. I am button mashing my way through those moments.” — Amanda B.

19. “Like the sky is falling down. Anything and everything you could imagine just feels like it’s falling apart. Absolutely terrifying.” — Ian R.

20. “It’s like seeing everyone around me moving, but I’m standing still, invisible. Gasping for air, but unable to break through the ‘invisible wall.’ Like a million tons of bricks on my chest. I can’t talk, I can’t tell them that I need them. It’s like drowning.” — Jana W.

21. “It’s like having a heart attack while trapped in quicksand. The more you fight to get through it the more you sink. No one can reach you to help pull you out and your chest is about to burst open with pain and panic. Eventually you have to lie back and surrender to your fate. And just like heart attacks and quicksand, you never know when you’ll get trapped by either one.” — Nikki T.

22. “Like a computer that stopped responding. It’s like loads of information being shoved into your head constantly and forced to process them all but you can’t because it’s all too fast and too many to count.” — Gianina P.

23. “It’s like trying to blow a marble through a drinking straw… something is blocking the air that is so diligently trying to get out. There’s a build up of pressure that is felt, then everything turns dark.” — Amanda O. 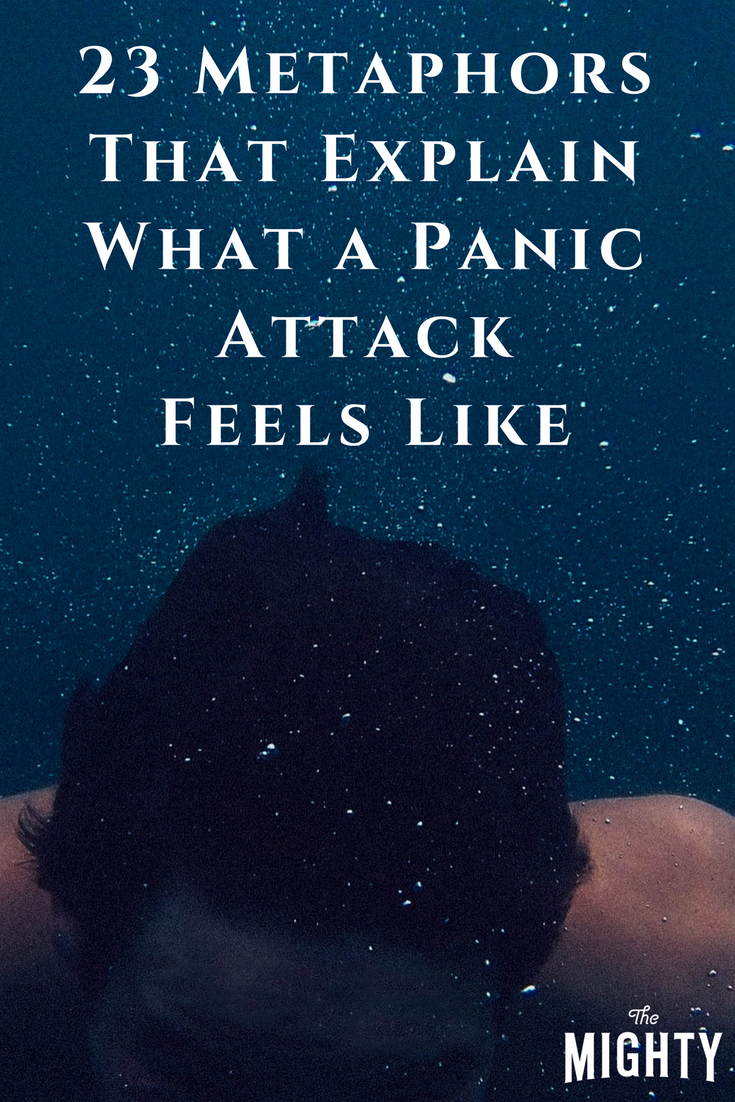