Postural orthostatic tachycardia syndrome (POTS) is characterized by an increase in heart rate, lightheadedness and sometimes fainting upon moving from a lying to standing position. As POTS is a form of dysautonomia, people may also experience symptoms such as fatigue, unregulated body temperature and nausea. Between one and three million Americans are estimated to have POTS, and women between the ages of 15 and 50 make up the majority of cases.

Because POTS is an “invisible” illness, friends, family and even doctors often don’t fully understand what it’s like to live with this disorder. We partnered with the Dysautonomia Advocacy Foundation to ask their Facebook community as well as our Mighty readers how they would describe what POTS feels like to someone who doesn’t understand.

1. “It’s like your body is trying to be in crisis all the time, but everyone tells you there’s no real danger. You never know when new symptoms will spring up or when the old ones will attack so hard you end up in the hospital for weeks. It’s lonely and you’re constantly advocating for yourself because not even a large portion of the medical community knows how to treat POTS.” — Joy Dygert

2. “[It’s] like getting off a merry-go-round with the worst hangover of your life on the hottest day of summer. But there isn’t enough water in the world to cure this one.” — Ali Johnson

3. “It’s like having the flu all the time. Your body is broken, but you’re the same person who wants to do everything you used to do but just can’t.” — Jessica Joy

4. “My internal thermometer is broken. Go on a roller coaster… close your eyes as the ride begins. Life with dysautonomia/POTS: You never know when you are rolling straight or about to hit the curves.” — Sherrie Shamo 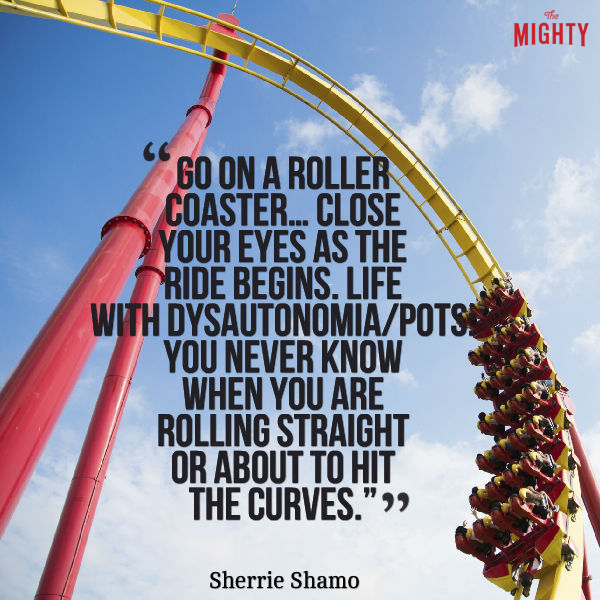 5. “Walking through a store or parking lot often feels like climbing a mountain in the desert. Shortness of breath, tachycardia, extreme blood pressure variarions, severe fatigue, sweating or chills, dizziness and sometimes fainting can occur. The next time you see someone who looks healthy using handicap parking or a scooter in a store, think twice before you judge them.” — Amanda Johnson Aikulola

6. “It’s extreme body aches, confusion, being cold, then hot, a limp rag doll with an occasional reprieve. I’m afraid to get out by myself for fear of not being able to get home. It’s having to cancel appointments or social engagements. It’s just not knowing!” — Julie Dunbar Kellenberger

7. “Spinning around in a circle for two minutes then trying to walk a straight line while reciting Shakespeare.” — Anne Phillips 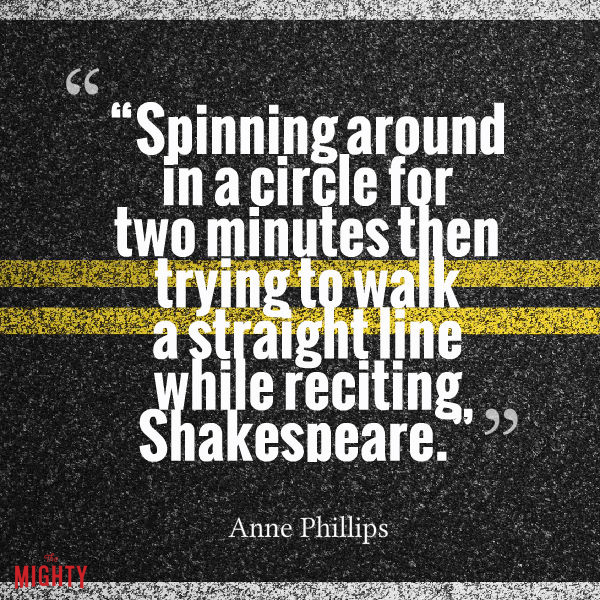 8. “It’s like living the moment you come out from being caught in an undertow, beat up, out of breath, and your body is scared. But you’re just walking to the grocery store from your car like everyone else.” — Katrinka Lo

9. “It’s like a 3-year old hopped up on candy is at the controls for my body. He has no clue how to control temperature (I’m cold when it’s warm and so hot when it’s cold), sweat (sweating bullets but my body to the touch is like ice), reaction to gravity, vision, depth perception (walls appear from nowhere), heart rate, blood pressure, senses (supersonic like a superhero, but takes me forever to understand what people actually say)… But sometimes that little boy takes a nap and I get control, and it’s wonderful to have control. But it’s short-lived and just a tease.” — Carrie Jean

10. “It’s like the sidewalk is a treadmill, and you’re running and working up a sweat. You’re heart is pounding, you’re lightheaded, but you haven’t moved an inch. Someone walks by and sees you struggle, and they roll their eyes because you haven’t even moved from your spot — how could you really be so tired?” — Danica McGuigan

11. “You know when you step onto or off a moving sidewalk and you have that split-second “Whoa!” moment when the world tilts, your heart rate jumps and you feel like you are going to fall over? That is my everyday life, 24/7.” — Kim Nehrbass Lauria 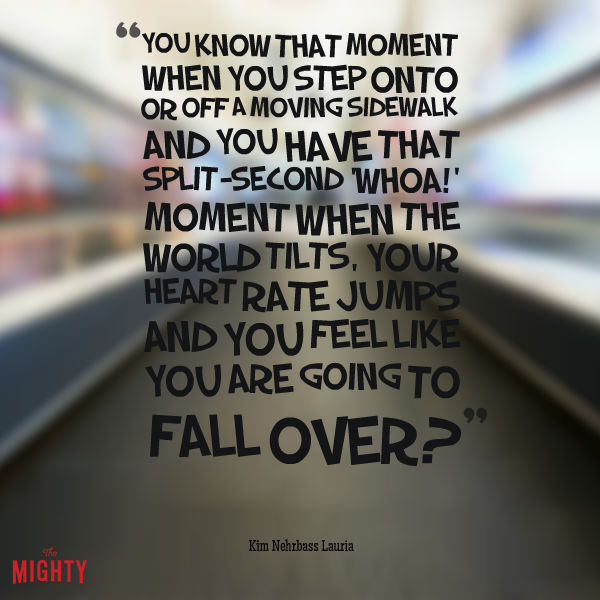 12. “[It’s] like living an action/thriller movie and having it suddenly shut off while you’re still living in the TV. Heart racing, stomach flopping, sweating, then the opposite.” — Sammie Barrett

13. “Having POTS is going from being an active, healthy 20-year-old to one who struggles to take a shower in the morning. Everything you used to do without thinking about the energy expended suddenly becomes something you may not be able to do.” — Kirsten Buchanan

14. “Every time I bend over and stand back up again, it’s like trying to walk through the spinning tunnel at Ripley’s Believe It or Not in New York.” — Lynn Julian 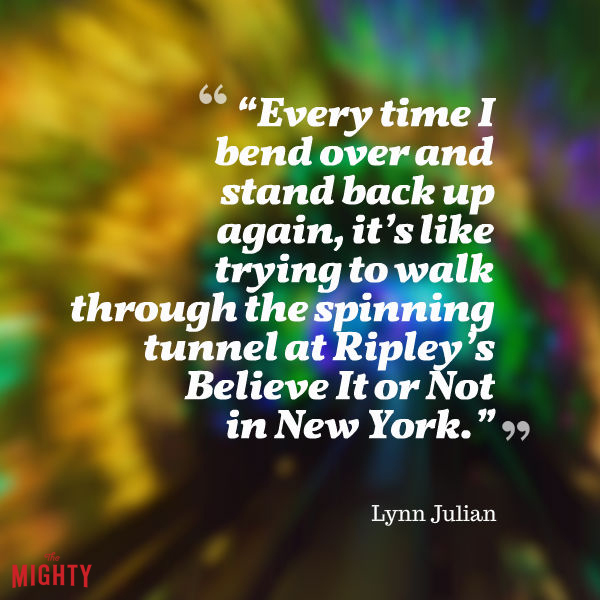 15. “Imagine not eating for a week and then spinning around in circles for two minutes and then laying down and getting up very quickly, all with fever sweats. It’s like that, but all the time. Some days are better than others, but it never goes away fully. We can only try out hardest to manage our symptoms.” — Shayna Leeds

16. “You know when you stand up too fast and get lightheaded and dizzy for a moment? POTS is like that, but with nausea and occasional passing out, and it happens every time I move. It’s scary knowing that standing up could cause you to pass out, and you have no control of when or where it happens.” — Ally Putvin

17. “It’s like being followed by an assailant with a baseball bat. You know they are there and can strike you in the back of the head and any minute knock you out, but you never know when or where it will happen. You always think you will be prepared because you know they’re back there, but it catches you completely off guard; every time it’s like the first time it ever happened. So you never get used to the routine.” — Suzanne Swanson

18. “It’s like riding the Teacups at Disneyland without the fun.” — Christine Rachuy 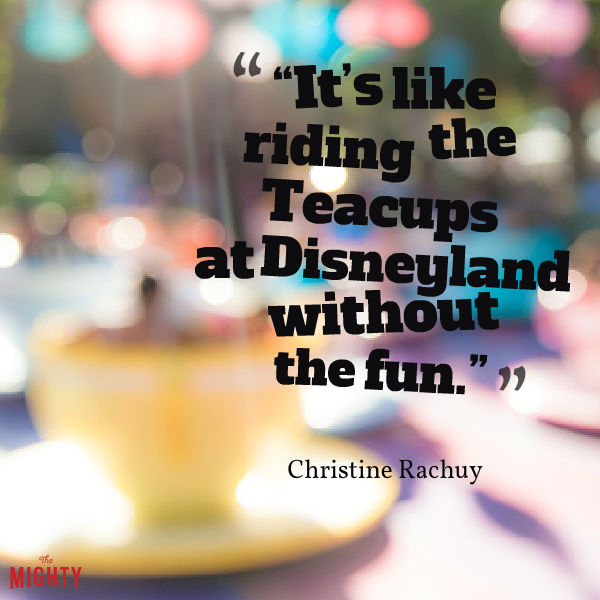 19. “It’s like returning to Earth after 700 years of no sleep on the International Space Station and immediately upon exiting your charred Soyuz you’re forced to perform like a normal adult as you simultaneously run an uphill marathon while fighting Montezuma’s revenge, except there’s no ‘welcome home’ party or finish-line medal or even a familiar face to cheer you on, because you’re invisible.” — Lindsay Warren

20. “Disorienting. Completely and totally disorienting. You feel as though you don’t know anything about your body anymore. Everything is out of order, or out of sync, or just plain whacked out.” — Laura Vago

21. “Completely life-altering. It’s not just head rush. It’s being unemployed, not able to go to school, unable to drive. But the community is so strong and supportive! Though I’ve lost my health, job and education, I gained amazing friendships and wisdom beyond my years.” — Em Janyska

If you have POTS, how would you describe what it feels like to someone who doesn’t understand? Let us know in the comments.

Save
Conversations 51
We use cookies and related technologies to help identify you and your devices, enhance your experience and conduct advertising and analysis. By choosing "Accept", or by using this site, you are agreeing to our use of cookies. You can read more about how The Mighty uses cookies in our Cookie Notice.
Manage Choices
Accept