I was on vacation when I went into labor without warning at 23 weeks, three days pregnant. I was airlifted to a strange hospital, hours away from home. I wrapped my arms and legs tight around the bed rails hoping that would keep the baby from being born.

When the doctor told me I had to push, I cried from the depths of my soul, “No! I will not have this baby today!”

The delivery room was silent. After long, torturous minutes of resuscitation, we heard that first tiny mew – a sign of life.

We watched our tiny son, Jaxson, who weighed barely a pound, struggle to breathe. We watched him fight off sepsis and endure at least six blood transfusions. He had serious problems with his eyes, heart and lungs. Doctors said he had a 4 percent chance of healthy survival.

During our 93-day NICU stay, I discovered many things about myself – mostly, I found out that I had strength and hope. If I were to turn back the clock to the day Jax was born, I would tell myself these things:

1. You’re better at rolling with the punches than you think. You love plans and crossing things off lists. Having a preemie will throw that out the window. You’ll learn right away what it means to literally take it one day (or even one minute) at a time. You will learn to just be with the people you love, rather than worrying about what comes next.

2. It’s hard to accept help, but you will need it. You will struggle to put one foot in front of the other. You won’t be able to focus on anything but the literal and precious balance between life and death. So, your lawn won’t get mowed and you’ll forget to eat. When your family and friends bring you food, walk the dog and organize a benefit for you so you can pay your bills, don’t stammer and hem and haw — just say thank you. A huge weight will be lifted off your shoulders. You are not alone. You’ll become more willing to give and receive help.

3. It will bother you when people say things like “Well, you should be happy he’s alive!” When people say this, you’ll want to shut down. People are just trying to focus on the positive, but when someone says this, you’ll truly know they’ll never “get” it. You’ll come to understand that not everyone has to get it.

4. You believe in guardian angels. Not being a spiritual person before, you will struggle with letting go and trusting Jax’s guardian angels. Science, technology and skill will all play a huge part in saving Jax’s life, but there will be days that you’ll feel them. Don’t ignore this – open yourself up and have faith. You’ll see your guardian angels every day in the rays of sunshine.

5. Sometimes the strongest people are the people you least expect to be strong. Jax will prove this to you time and time again. Look at that tiny baby who weighs barely a pound, and watch him flap his arms and move his head and furrow his brow. Watch him fight! You will no longer doubt what people can do. 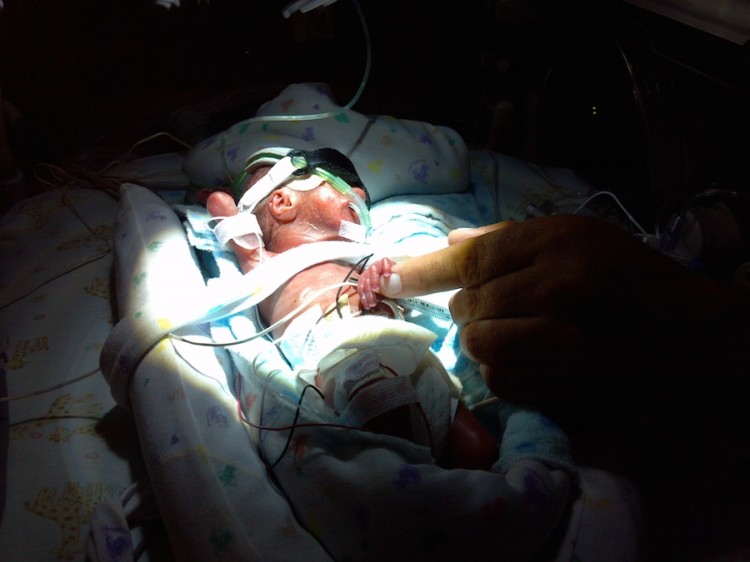 The Mighty is asking its readers this question: If you could go back to the day you (or a loved one) got a diagnosis, what would you tell yourself? If you’d like to participate, please send a blog post to community@themighty.com. Please  include a photo for the piece, a photo of yourself and 1-2 sentence bio.

Andrea Mullenmeister is a writer and mother to her warrior son who was born more than four months before he was due. Andrea writes about her family’s story of love, hope, and survival at An Early Start. You can also follow her on Facebook, Twitter, and Pinterest.

andrea-mullenmeister
Want more of The Mighty?
You can find even more stories on our Home page. There, you’ll also find thoughts and questions by our community.
Take Me Home