What It's Like Having a Third NICU Baby in Three Years

I thought the birth of my daughter would be different than my sons. I honestly believed this baby wouldn’t have to stay in the hospital longer than a few days. I imagined we would be able to go home together.

I had a good pregnancy with my daughter Grace. I had more amniotic fluid than normal with her, but other than that, it was pretty smooth. When Grace was born, she choked on some amniotic fluid, had some trouble breathing, and was immediately taken to the NICU. I didn’t even get to hold her. I touched her hand through an isolate as they were wheeling her away.

With our third baby in the NICU in three years, everybody knew our history. Her doctors immediately started doing some tests on her. Within the first few days of life, she had an echo on her heart, abdominal ultrasound, an MRI on her brain, and genetics testing, which everything came back normal. (The genetics tests was a panel of only about 200 genes).

People asked us if more kids were in our future. Nurses and doctors would ask us, “so are you done?” or “are you going to have more kids?” It was almost like they were really asking us, “did you learn anything this time around?” They said words like “unlucky,” “a bad hand,” and “unfortunate.” It was hard having faith when everyone around us had a different mindset.

Grace had a difficult time breastfeeding and taking a bottle. It was hard for her to compress down on the bottle, because she has a high palate. We tried slower nipples on the bottle and gave her breaks every few sucks. The slower nipple bottles seemed to work so we went with it.

She was doing well with feeding and her oxygen level was good. She passed her hearing test and all her labs looked great, so we hoped she’d go home soon. Things were looking up. 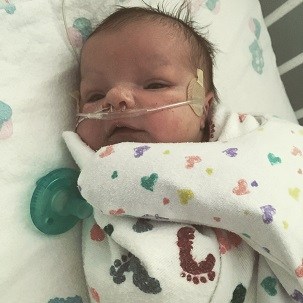 But then she started coughing on the bottle. This was something we’d seen before with my son Nicholas. We knew it all too well. We knew it was possible that she was aspirating her food. But we still had hope that maybe she wasn’t. Her oxygen never dropped. She was doing better with feeding every day, pacing herself and taking breaks.

A few days later, Grace had a swallow study that confirmed she was aspirating. She needed a feeding tube just like her brother Nicholas. I already knew it. I just had a feeling. I had already accepted it and wanted her to have the surgery as soon as possible so we could get her home. We didn’t want what happened with Nicholas to happen with Grace. We didn’t want Grace to be in the hospital just to be there. I voiced my concerns to her doctor and he agreed with me.

We requested the same surgeon for Grace who also did surgeries for Nicholas and Daniel. She was someone we had been seeing for three years and trusted her.

Grace had surgery for a G-tube and Nissen at 10 days old. She recovered really well and her feeds were increasing every day. She moved to the graduate side two days post surgery. She was scheduled to go home soon.

Then, the day Grace was supposed to come home, there was drainage coming from her G-tube site and belly button, where her cord came off. She was diagnosed with MRSA, a bacteria that causes infection, and would be on antibiotics for five to seven days. It was devastating. It was the worst thing I could hear. I wanted it to be a short stay and just wanted her to come home. This was getting harder and harder every year. Watching our kids lay in their beds in the hospital for more than a few days was getting old. I was over it. I was done.

After a few days, her doctor said she could come home. He had given Grace a 48-hour antibiotic and she was doing better. She was discharged the next day. Grace was in the NICU for three weeks, the shortest stay out of all three kids.

Thankfully, we already knew how to use her equipment going home since Nicholas also has a G-tube. That made the transition that much easier.

With three kids in the NICU in three consecutive years, it led to some more in-depth genetics testing. After receiving some positive results, we are questioned frequently whether more kids are in our future.

Honestly, we have no idea what the future holds. We don’t know what God has in store for us. One thing is for sure though. Our family is not unlucky or unfortunate. Yes our situation may be tough, but it’s certainly not wrong or bad. Our kids are happy. Truly happy. And that’s all that matters. We have given them life. And that’s the best gift you could give anybody.

Learn more at This Special Journey.

I have three kids with special needs, which has inspired me to share my experiences, struggles, and triumphs. I want to help and give hope to families on the same journey as I am. I love God, my family, writing, reading, and movies. Follow my journey at http://thisspecialjourney.com/