Why I'm Raising Awareness for PSC After My Own Difficult Diagnosis

I woke up, climbed out of my cot, quickly got my boots on and hurried out to the line for the latrine. I was going to puke and hoped I would make it. Luckily the person inside finished their business quickly. This wasn’t the first time I’d thrown up during my basic training, but it was the most intense, and I had a pain in my right side as well. It was warrior week, as the air force calls their most intense week of training. Fifth week, out of six. We were doing field training and I didn’t feel right.

After I was sick I had gone to the training instructors and they had me checked out, only to think I had gallstones and have an ambulance pick me up and take me out to the hospital. That day I threw up a couple more times before they released me, and I went to stay in a neighboring flight’s dorm while I waiting for a transport back to mine the next day. Only, about 20 minutes after I laid down, I had to run to the bathroom and be sick again and get rushed back to the hospital yet again. The nurse actually told me she thought I was faking until I puked uncontrollably right in front of her, and only just missed her shoes. It was then that they started to think I had gallstones, and a day later I was in surgery getting my gallbladder removed.

It was a scary time for me. I’d never really been sick much, except for the occasional throwing up. I was too young to know that was a sign of something more severe at 16 though, and it continued on up until I was admitted and rushed into surgery shortly after my 18th birthday. I was alone, but I thought I would be OK after it was taken out.

I was left on med hold after my surgery, and I wasn’t recovering as the doctors thought I should. I was called down to the Squadron’s Commander’s office. I was terrified I was in trouble but I went without delay. I was asked some basic questions about my training, what I had missed with warrior week while I was sick and a few other things. He then brought up that he had a call from my doctor and they wanted to do another test. I agreed it would be fine, thinking nothing of it. Everything was a blur after that up until the next thing I remember clearly. Laying in the recovery room after my first MRCP, my throat sore and groggy from the anesthetic. The doctor was standing in front of me, explaining that they’d found strictures in my bile ducts, and showed me the images they took while they did the procedure. He explained that I had five to 10 years before I would have to have a transplant, or I would die. I felt… broken… in shock… alone… and all I could do was break down into tears and sob in front of this man I didn’t even know. My house came crashing down around my ears while I was still in it, and I didn’t know what to do.

That is the day my world changed forever, and the single worst day of my entire existence. Up until that point my whole life’s plan had been to stay in the military for many, many years, and then maybe go civilian and transfer to a civilian government agency. I had it all worked out. I was going to cross train into another job, because I knew the skills I would learn would be highly useful where I wanted to go, but I was just handed a diagnosis telling me that life as I knew it was at an end. That I would have to return to the home of my abusive mother, and deal with the fact that she wouldn’t let me sleep there even one night after I was discharged. It felt as if my heart had been broken into a million pieces.

Today, I’d like to think there aren’t others like me who are sitting alone with a doctor standing before them getting a horrible diagnosis. I’d like to believe that their family will be there for them no matter what. What’s worse, my best friends at the time didn’t believe me, or understand why I was different. They actually ostracized me and stopped being my friends because of this stuff. They had never even really asked, or let me cry with them over the loss. I was grieving. Grieving the loss of what my life might have been. I was grieving the loss of being able to see the world and live a normal life. I was grieving being able to live at all, because I thought I was going to die in five years, and while I don’t really remember, I probably pushed them away and pushed the limits of what they knew how to cope with. I’m not really sure. I just know that my head was in a bad, dark place, and emotionally I was completely broken, even though I tried to hide it from everyone. I don’t think I did a very good job of that though.

I am sharing this story because I know there are others out there who feel like me and I know they need to know their world isn’t over. Just as I found out being told this horrible thing wasn’t the end for me, I hope I help someone else find the strength to reach out and talk to those they love. Life goes on, and the world keeps turning, no matter how we feel. We just have to learn to adapt to it. I may have PSC, but it doesn’t have me, as my friends in the PSC Partners Seeking a Cure online support group like to say. I found them, and I dearly hope you do too. Even if I silently lurk most of the time I am so glad for these ladies and gentlemen. They understand, and they are not alone, and now neither am I. 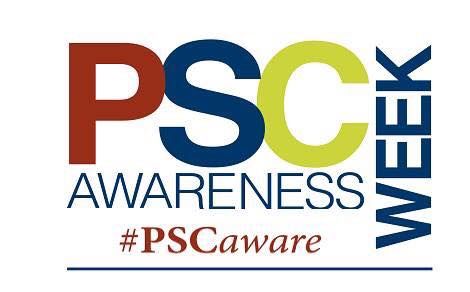 It’s now been 15 years since that horrible day, and I’ve learned through reading and through life experiences. I’ve had a beautiful daughter whom I love dearly and a husband who means the world to me, even as he’s sleeping in the bed next to the computer while I write this at 4 a.m. My life hasn’t stopped just because I was given what felt like a death sentence – in fact, I’ve done far better than my original prognosis (though it really hasn’t been all sunshine and roses). PSC is a silent disease, and unless someone has jaundice (yellow skin and eyes), you wouldn’t even know there’s something going on with their health. Some people are able to go their entire lives without a transplant, and yet I know at least three people online who have had multiple, because PSC can come back and affect the new liver too. It can affect more than the liver – in fact, my pancreas is currently being affected too. The biggest thing to know about this is that the only treatment that can cure it is transplantation.

Unfortunately, there is also an organ shortage. Some patients can even take partial live donor transplants and take up to 70 percent of the  donor’s liver, and the organ actually regenerates too. Talk to your family, make your wishes known. I encourage you to become an organ donor.

First and foremost I am a mother. I try to do my best to care for my daughter, but some days are harder than others when my issues flare up. I am a gamer, a food lover, and a star wars nerd. I love Yoda, and I'm very passionate about advocating better treatment for mental health issues and for fighting against all abuse I see.

aliciahublou
Want more of The Mighty?
You can find even more stories on our Home page. There, you’ll also find thoughts and questions by our community.
Take Me Home