When Someone Questioned My Requests to Accommodate My Child's Disability

Transitions are hard. Especially when you have a rare disease.

My older boy started sixth grade this year. We were already reeling from the hormonal changes that come with pre-teen-hood, and braced ourselves for a middle school that had never had a student in a power wheelchair zip down their halls for the last 10 years.

The pressure was on.

I made calls, sent emails, drove up to the school every chance I got, and did everything parentally possible to ensure his accommodations were in place, and he, like his peers, would have a chance at a wonderful middle school experience.

Finally, I was beginning to see some headway when I was suddenly affronted by a comment:

“You know the real world doesn’t work like that!” The person who spoke had been watching me struggle with my kid as he transitioned into his new environment.

“Excuse me?” I replied, my squinting eyes trying to take in the blows of her fierce words.

“All these accommodations your son is asking for…” and she waved her hand in a perfunctory manner. “What is he going to do in the real world when no one is there to make those accommodations?”

The color slowly left my face; it suddenly felt cold.

The lady continued, “Don’t take this wrong way honey, but you are setting that sweet boy up for disappointment!”

A million buried battles flitted across the pages of my mind – battles where a little boy stumbled and fell, felt the urge to turn and run, but did not; battles where a mother bellowed “this is unacceptable” over and over again till her throat was coarse and dry, and battles where defeat reared its ugly head, but was cut down by a little boy time and time again.

Was I doing it all wrong? Were these mighty battles setting my son up to somehow fail?

Trembling, I dropped my folder spilling the contents of my boy’s medical needs. Needs that neatly outlined adaptive PE, bathroom assistance after arduous hours of surgery and painful recovery, and tear drops – now dried over time – of an unspoken prayer that someone somewhere, between all the duties to be checked off, would find the compassion in their heart to make a little boy feel like he was just right for this world.

I have always advocated for my sons, and now that my older boy was mature enough, I had started to encourage him to speak up for himself, to recognize his strengths and challenges, and to help him identify and push for the resources he needed.

Now I wondered if speaking up and asking for what he needed was somehow enabling behaviors that would be frowned upon in the real world – a world where many buildings and entrances are still not wheelchair accessible, where workplaces still prefer hiring able-bodied employees, and restaurants that still fail to recognize the importance of plastic straws for people with disabilities.

While it is true that the world may not be an easy place for someone with a rare disease, and the words of the woman holds true, the fact is there is so much more to the simple idea of “asking for an accommodation.”

The Americans with Disabilities Act (ADA) which became law in 1990 strives to make sure that people with disabilities have the same rights and opportunities as everyone else. Title II of the ADA applies specifically to educational institutions, requiring them to make educational opportunities, extracurricular activities, and facilities open and accessible to all students.

Asking to be accommodated and working together as a team to make allowances for a rare disease or disability is an important step to justice and a skill kids need to learn early on.

These kids need a support structure – to ask for the help of a community of others. This reliance enriches strong relationships. It gives the helping community (family, friends or schools) a chance to bond as a team, to grow, to transition, and to have new experiences, together.

When accommodation is done right, and not begrudgingly, it can offer wonderful opportunities for discovery. Like when my boy climbed his first rock wall or shot a near bullseye in outdoor education using a modified archery bow! 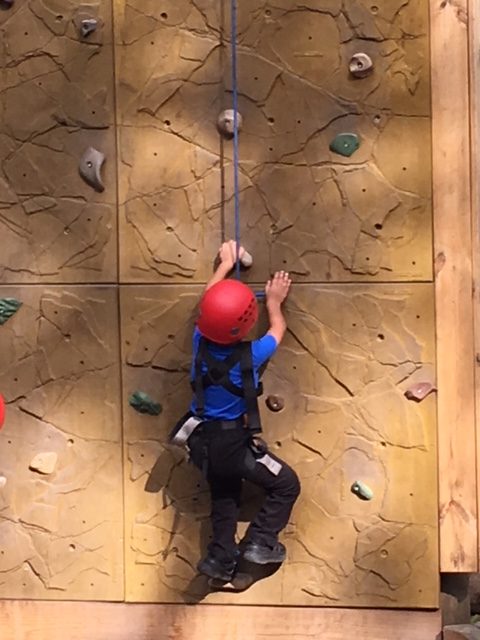 For a lot of us with a rare disease, asking for help is a remarkably difficult thing to do, an inconvenience for others, a sense of turning the spotlight on your weaknesses when all you want to do is blend in.

Most often, a fear of asking for help is really a fear of judgment. That slight twinge of, “What will the other person think of me if I need help?”

Learning to be unashamed about asking for help will be a strength that serves my boy well as he continues to navigate his complex and oft-unjust surroundings.

And along the way, if his reaching out builds our sense of compassion, then we will have won a worthwhile battle.

So to the lady who jolted me in my tracks, this world could do with more compassion and less wisdom that propagates unjust systems that marginalize the most vulnerable among us.

I will continue to sow the seeds of self-advocacy in my son; I will enable him to understand his strengths and weaknesses, to know what he needs to succeed, and to make sure he communicates that to the people he meets.

Do you want to share your story about living with a rare disease? Click here to find out how.