No, I Don't Have 'Zombie Hands.' I Have Raynaud's.

It is the month of October. It is time to shop for Halloween outfits. When you see my hands looking like this picture below, it doesn’t mean, however, that I am a zombie, dressing as a zombie for Halloween or hoping to meet one of those zombies everyone talks about in that hit TV show. 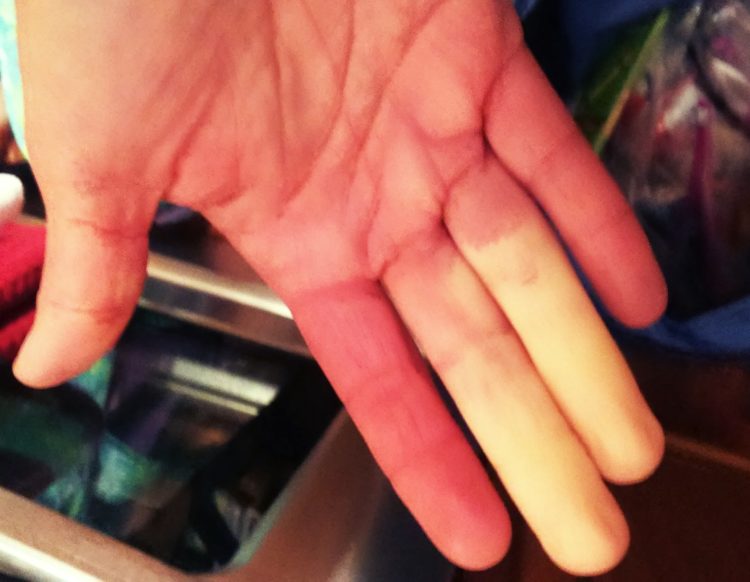 What I can do is explain it to you, since October is Raynaud’s Awareness Month. I know, I know. Say what? Buy yourself a pair of mittens or gloves month? Trust me. I have heard it all… “I have that too!” “Sit on your hands, they will warm up in no time.” “Just wear warmer gloves.” I could go on and on. But it’s OK, really. I have actually had “it” for a long time.

For years “it” didnt become life-interfering. When I was young it was random and fun to show friends. It was not severe and “it was not ‘named’” and “it” was not worried about or talked about. My brief “stint” with juvenile rheumatoid arthritis was just that – a brief stint. As I got older and my bones got older, I found things were happening at a faster rate than my birthday “age” was telling me.

My Raynaud’s that was once “cool” was suddenly painful. I started to wonder. I wondered a lot. People would tell me all the time: It’s stress. Because, yes. I live a stressful life. No doubt. So that made it harder for me to approach care about it. I mean, I am sure I would hear it there too: “It’s stress,” “Wear gloves/mittens,” “Go talk to someone” or “It’s all in your head, as you have a full plate.” This was when, at 43 years old, I finally had to get a better understanding of Raynaud’s phenomenon (better late than never). I realized I needed to “come out of the super cold closet” and I didn’t know why that was such a “big thing.” But here is “the thing”: What’s cool (no pun intended) is this year, NYC’s Time’s Square was nice enough to help the Raynaud’s Association out and they did this: 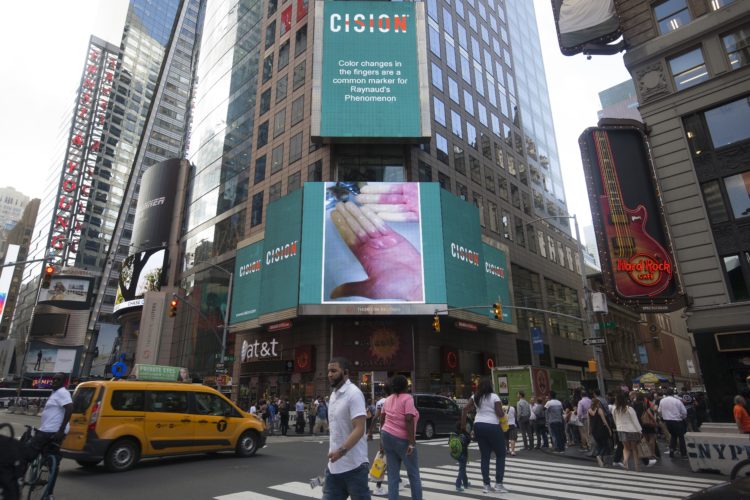 Really no running and hiding from that zombie hand in 2017 in the middle of NYC, huh? Good for you NYC. Good for you! Got to love NY. Got to love the Raynaud’s Association. Good teamwork, people. But seriously. Why is talking about Raynaud’s so important? Here I am, a mom of two who has written for The Mighty before, however, about being an advocate for my kids. Why am I not practicing what I preach? Shame on me. Is it because I am embarrassed to walk around in mittens in 75 degree weather? (Yes.) Is it because of what people think and say? (Yes.) Triple shame on me.

If we want people to understand the disease, then we have to share it and explain it so it is not so “odd” to others. We have to advocate. Because guess what? Raynaud’s disease is actually very prevalent; as of 2017, it affects as much as 5-10 percent of the population. For such a widespread condition, awareness is actually very limited. How limited? Well, the stats say that about only one in 10 of us will actually seek medical treatment due to the exact same reasons I stated above. Stigma, excuses, etc. That is a real shame. Especially since there is a lot to Raynaud’s.

What does this mean? Well…

First it means that, yes, I do have to wear my mittens to my daughter’s cheerleading game when it is 75 degrees out and ignore the stares from other parents – because they may not realize I am having a bad Raynaud’s day and underneath the mittens  my hands look like this: 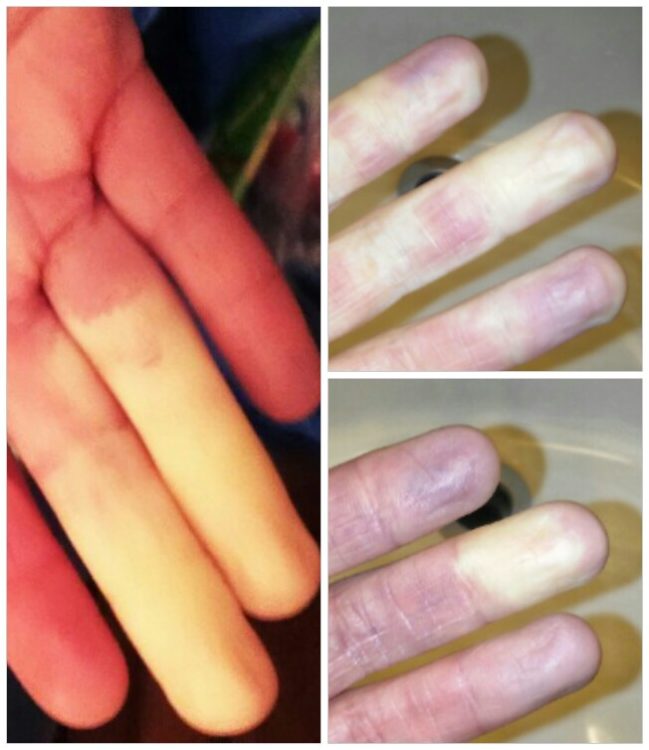 So, you ask, how do you even say that word, “Raynaud’s,” and what is Raynaud’s exactly?

These are great questions! I will leave it to the experts to give the best answers possible (i.e. The Raynaud’s Association).

Raynaud’s is pronounced: ray-NODES. The Raynaud’s Association states on their website that it can be defined as, “a disorder of the small blood vessels of the extremities, reducing blood flow. When exposed to cold, the blood vessels go into spasms, which may cause pain, numbness, throbbing and tingling… These color changes… are an exaggeration of a normal response to cold exposure.”

“There are, however, two major kinds of Raynaud’s that are important to recognize: Primary Raynaud’s, the most common type, is not linked to another underlying medical condition or disease. There is no apparent cause for the phenomenon to occur. Primary Raynaud’s is not usually ‘disabling’ in the typical sense, but sufferers can experience great discomfort and pain – requiring lifestyle adjustments to minimize exposure to cold and stress.”

“Secondary Raynaud’s is the term used when Raynaud’s is associated with another medical condition or disease, often of a rheumatic nature such as scleroderma (also known as systemic sclerosis), lupus (systemic lupus erythematosus) and rheumatoid arthritis. Often, Raynaud’s symptoms are the first sign that such an underlying connective tissue disease exists.”

What are common symptoms of Raynaud’s?

Common symptoms of the disease can be expressed by this diagram thanks to The Raynaud’s Association : 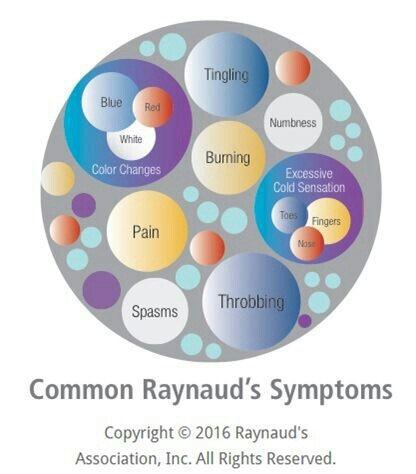 What is the deal with this zombie-ism?

Bottom line: There is no clear pattern for a future prognosis. However, as stated above, “Raynaud’s is associated with other medical conditions or diseases, often of a rheumatic nature.” As a result, it really is important for us zombie-handed creatures (only joking) to go to the doctor, get an actual diagnosis and find out which one you are of the two types of Raynaud’s.

Additionally, the doctor can then start to follow you and watch you as time goes by – this can never hurt. For me? It turned out that I had the latter of the two. I came back with a positive ANA test (auto nuclear antibody test) which measures the amount and pattern of antibodies in your blood that work against your own body (autoimmune reaction). Our body’s immune system normally attacks and destroys foreign substances such as bacteria and viruses; in my case, it’s doing the opposite. As my body is literally fighting against itself by mistake, the doctors are working to figure out where I am right now.

What we know so far is that my Raynaud’s is very uncomfortable for me at the moment and it was my very first “marker,” per se, along with my joint pain. So as silly as it may have felt to address the white fingers, it turned out to be super important. A barium swallow shows esophagus dismotility and an upper endoscopy shows gastritis, so my chest pain and weight loss weren’t just stress after all, and my skin, lungs, joints, bones and heart had changes as well.

While I navigate this whole world at 43 I am learning it’s important to practice what I preach. I tell my kids all of the time to listen to what the doctor told you, not to worry what other people think, take care of yourself and to be yourself above all. So maybe Mommy’s right after all – imagine that! 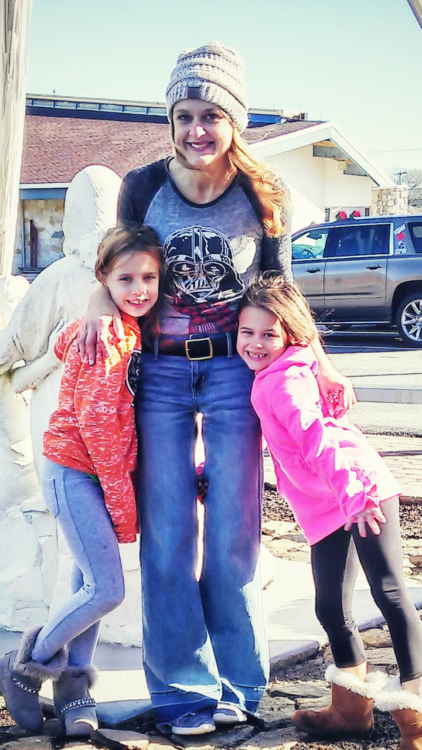 And with my two kids at ages 8 and 6, if wearing mittens to their games is what I need to do (albeit embarrassing for them), what’s the big zombie deal, right?