Instagram recently blocked recent posts from showing up for many mental health-related hashtags like #suicide, #cutting and #schizophrenic. As an advocate, I question why we are blocking the language — and therefore the discussion — surrounding mental illness at all. But, as a schizophrenic, I’m deeply concerned that Instagram determined my illness is offensive, inappropriate and/or triggering. 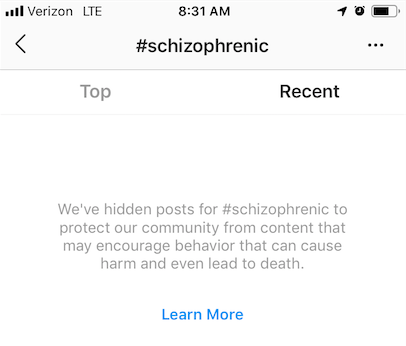 In my research, I noticed that the hashtag “schizophrenia” is still allowed. I do have schizophrenia but — on Instagram — I’m not permitted to be schizophrenic. This is an odd distinction to draw and I suspect the well-intentioned, yet terribly misinformed, people behind person-first language have influenced this decision. I’m sure many people consider limiting the words people can use to openly discuss mental illness a victory. But I don’t. Because it’s another barrier to discussion, education and ultimately understanding.

I want to openly discuss schizophrenia because I’m a schizophrenic. I don’t understand what rules I have to follow outside of being respectful to my fellow Instagrammers. Blocking the word “schizophrenic” has now let everyone know that the illness I live with is offensive and triggering. People are afraid of asking questions for fear they will be labeled as rude, stigmatizing or discriminatory.

I have no doubt Instagram believes they helped people like me today, and I am equally sure people will claim victory over limiting the ways people can access information and education about mental illness. As a person who lives with schizophrenia or as a schizophrenic — your choice — I can tell you with absolutely certainty that this did nothing to make my life better. I will never understand why we argue over this nonsense about the right language.

When can we talk more about access to healthcare instead?

This piece originally appeared on Schizophrenic.NYC. Check out Michelle’s podcast, “A Bipolar, a Schizophrenic, and a Podcast,” here.

Michelle Hammer is the creator and founder of Schizophrenic.NYC a Mental Health Clothing Line in NYC that is trying to reduce and end stigma in the great city of New York