Yesterday, I was reading about Venus Williams. You know, the phenomenal woman who plays tennis better than anyone ever, except maybe her sister? The Venus Williams who also happens to have Sjogren’s syndrome. You know, the debilitating disease that most people think is just dry eye and dry mouth but is actually so much more?

Ms. Williams first announced she had Sjogren’s in 2011 and it has been the subject of much discussion in the sports world, since Williams herself gives few interviews about it, focusing mainly on her healthy diet and lifestyle. But the articles I read yesterday were about her latest tennis championship attempt and the role her Sjogren’s may have played. And I, for one, wasn’t happy.

Here’s my issue, which has nothing to do with Venus herself. The media seems to have no idea what they’re talking about when addressing the issue of Sjogren’s in connection with Venus Williams and her tennis. I really shouldn’t be shocked about this. Most people have never heard of Sjogren’s. I’ve had to educate most of my own care team over the past 21 years. Some doctors even now are still at a loss when I come into the ER. So why should I fault the media?

Because the media is supposed to do their research before putting out a story, or even a headline, for publication. So a Facebook status on a ESPN story yesterday said “From racism she experienced to Sjogren’s syndrome, Venus Williams has overcome a lot” particularly upset me. 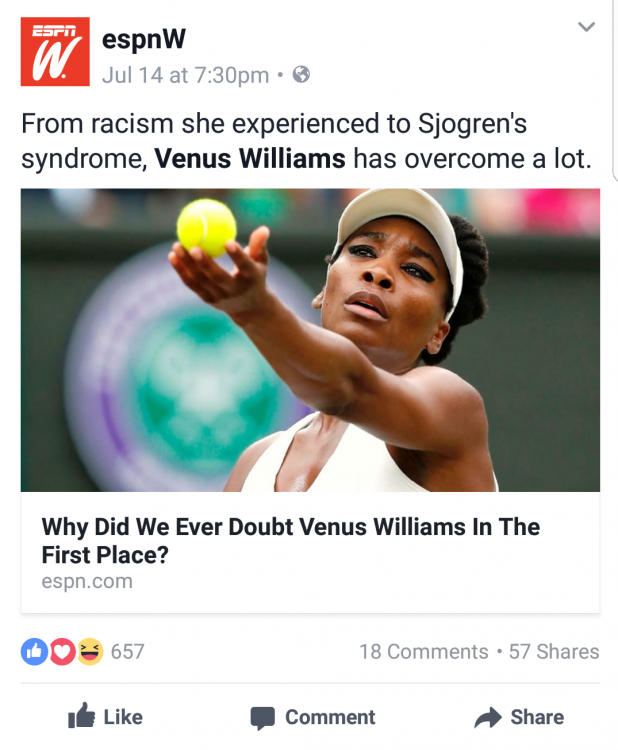 My reason is simple. One does not simply “overcome” Sjogren’s. It is degenerative and incurable. It does not go away, only into “remission.” Not even someone as strong as Venus Williams, a woman I believe is destined for the International Tennis Hall of Fame, can overcome a degenerative and incurable disease. And to suggest that her daily struggle with such a disease is anything less than it is by suggesting the disease has been overcome is to diminish what she achieves on a daily basis; especially when she competes with this monster of a disease hiding somewhere inside her body like a tiger waiting to pounce.

It also diminishes what the rest of us out in the world live with and accomplish every day with this disease. We raise children. We work jobs. We go to school. We manage families. We fight the monster. We fight and we keep fighting because there is no overcoming, just fighting, getting through the day and waking up again. It’s a constant battle. It’s our lives. And it’s invisible. So many of us are told it does not exist, it can’t be that bad and we are making it up. So we depend on news stories to uphold our pain and our struggle so our families know it’s real.

And then the media says it can be overcome.

Do you understand now?

And let me just mention the commentators. Believe me, I understand they will know more than I ever will about tennis. I was a swimmer, OK? But they know nothing about Sjogren’s. Nothing. And I do. So I may be overstepping here, but I have to call out John McEnroe. Tennis is a really demanding game. It’s fast-paced and physically draining. Any player can “hit the wall” during their final sets. For McEnroe to say, “I’m not sure if the Sjogren’s syndrome reared its head” in reference to Venus Williams and her seeming loss of energy is speculative at best and inappropriate in my opinion.

I realize injuries are always brought up when players are not at their best, but this is not an injury. It is a forever thing that Venus will learn coping techniques for that may or may not always work. As an athlete, McEnroe should know many don’t like to have a loss blamed on old injuries, illnesses or anything other than “Hey, she outplayed me today.” And because her illness is chronic, it should not be brought into speculation.

In other words: She has earned the respect of speaking for herself about her performance. Sjogren’s or not, she knows her body best and what affects it.

So the moral of the story for those of you in the media is: Ask Venus what’s going on, don’t assume it’s Sjogren’s. This disease is nasty but it comes and goes. Realize there’s no overcoming it. It’s degenerative and incurable. I get that Ms. Williams has more resources at hand to hinder the progress of the disease than I will ever have, and that for her, this means more chances at “remission,” but for the sake of awareness, please write about this disease with accuracy. It helps us all.

We all deserve respect for what we deal with: Sjogren’s.

P.S.: Keep up the good fight Venus, you’ve got a whole community backing you!

Born and raised in Rochester NY, she was diagnosed with Sjogren’s 4 months after her second son was born. Her kids are now 24 and 26 years old. She has since developed MCTD, Inflammitory Arthritis, and Fibromyalgia. She raised my kids, worked at her career for over 30 years, and has been a wife to her husband of 29 years while being diagnosed with an autoimmune disease for 24 of them. She currently writes from the heart about these experiences while wrangling their one rescue dog and three rescue cats as well as volunteering for a rescue organization as a kitten cuddler on weekends. She recently fostered a young mama cat with her 5 2day old kittens and has now added mama Lilli to her brood!