After Ignoring a Cancerous Lump for 11 Years, Woman Shares Photos to Help Others

Jodie Dominy is a 43-year-old Australian wife and mother of two whose positive outlook, sense of humor and sheer determination helped her beat the odds many times in life. But she never thought her personality would play such a significant role in her life. Not until three years ago, when she was diagnosed with dermatofibrosarcoma protuberans (DFSP) – a rare skin cancer.

In 2014, when Dominy was about to turn 40, she noticed a lump on her jaw bone (which had been there for 10 years) started to grow bigger and become sore. She spoke to her doctor, who assured her with an ultrasound that it was only a cyst. 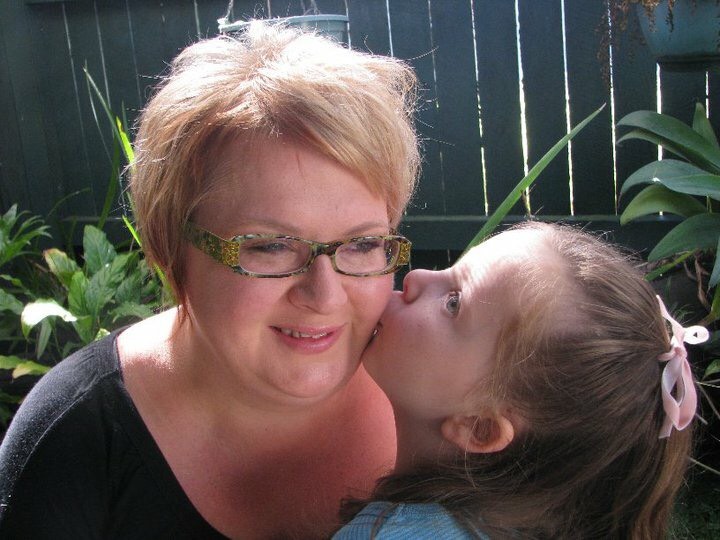 Dominy went to see a different doctor about a sore on her lip, which turned out to be a small skin cancer, and was referred to a plastic surgeon. While discussing removal options, she asked him if he could get rid of her “cyst.” He decided to take a biopsy of it even though she showed him all the clear ultrasounds from previous years.

“This plastic surgeon saved my life,” Dominy told The Mighty.

About a week later the doctor gave Dominy the diagnosis — dermatofibrosarcoma protuberans, also known as DFSP — a deep tissue cancer that grows from the middle layer of your skin to the outside.

He immediately scheduled a drill hole procedure, which would consist of drilling holes in Dominy’s face to determine the margins of her cancer. This would ensure when they did remove it, they would get it all. (For DFSP, doctors suggest a 3-centimeter-clear margin.) 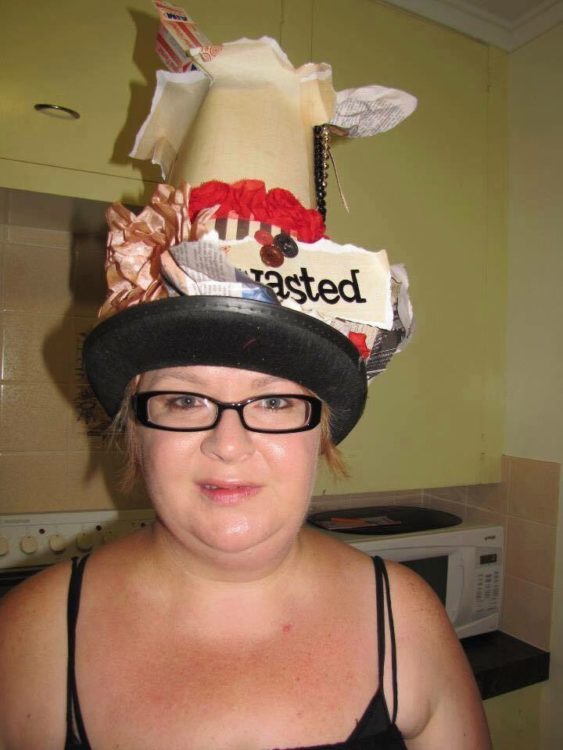 “I was booked in and had seven holes drilled into my cheeks, chin and jaw line,” Dominy said. “Waiting for this test was scary because at this stage I knew I was going to lose part of my face. I just didn’t know how much. But I stayed positive and figured what will be will be.”

The results showed the cancer had spread through Dominy’s chin and bottom lip. It was wrapped around her jawbone and up into her left cheek. Doctors told Dominy they would have to remove a large portion of the bottom of her face. Despite the news, Dominy remembers not thinking too much of it all. She said at first she joked it would be a way for the doctors to get her to stop being a chatterbox.

In fact, Dominy’s friends and family were more upset about the news than she was. And Dominy found herself comforting them as they cried over the news. Despite being concerned, her kids took the news OK. But at no point did anyone think her cancer would kill her.

“Realistically, them finding it when they did was a godsend. If they hadn’t found it when they did I would have been blind within six months and dead within two years. So I really felt like I had dodged a bullet,” she said.

Weeks prior to her surgery, Dominy and her husband Pete faced some difficult conversations, but as always, they used humor to get through it. They agreed they would first share photos of her after surgery to the kids before they saw her in person as a precaution. 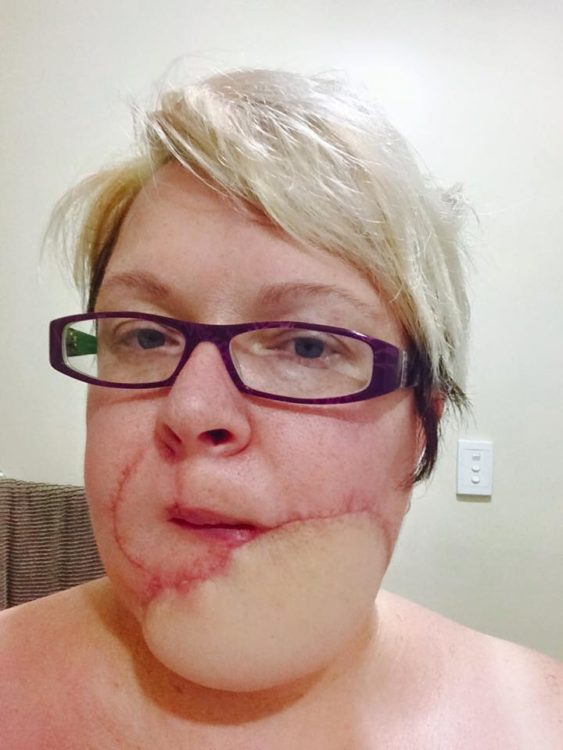 On December 10, 2014, Dominy finally allowed herself to be scared.

“I had all these thoughts going through my head: What if I end up looking like a monster? What if Pete and the kids couldn’t bear the look of me?”

She remembers looking at Pete and crying, then him hugging her and saying it didn’t matter what she looked like; she would still be her old self and he would still love her.

Saying goodbye to him before surgery was painful for Dominy since it would be the last time Pete would be able to kiss and see her face as he had known it all of their married life. But he gave her a big kiss and then kissed her arm.

“The nurses asked him why he did that,” Dominy explained, “and he said, ‘Well that’s going to be her new lips, so I just wanted to give her another kiss.’”

Dominy remembers lying in the operating room before the surgery, shaking uncontrollably and unable to stop her teeth from chattering. Just before going to sleep she couldn’t breathe and she felt like everything she had ever known about herself was about to be taken away. She never considered herself a beauty queen or a vain person, but for that brief moment, she wanted to be vain and beautiful.

And so, the nurses did that for her. After crying with her, her nurses held her hand, told her she was beautiful and then Dominy went to sleep. 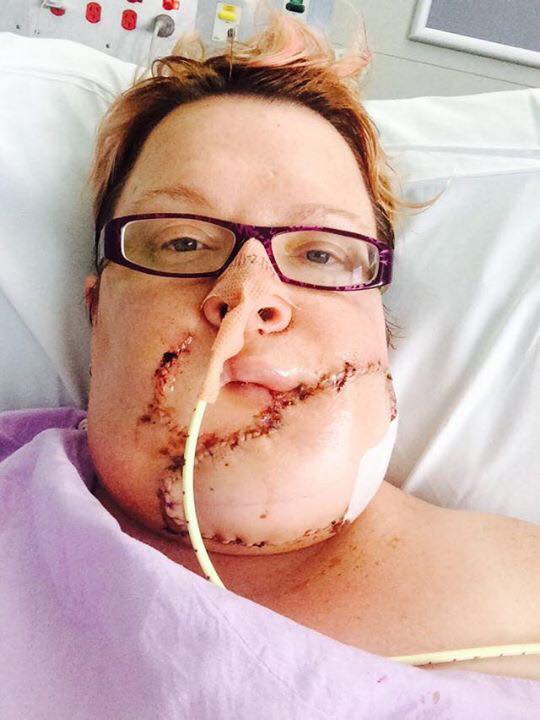 Dominy woke up in intensive care nine hours later with Pete sitting beside her and a big grin on his face. The first thing he said to her was, “Hey baby, everything went well, you look good.”

She had a feeding tube in her nose and her arm was in a plaster because they had removed tendon to rebuild her face. 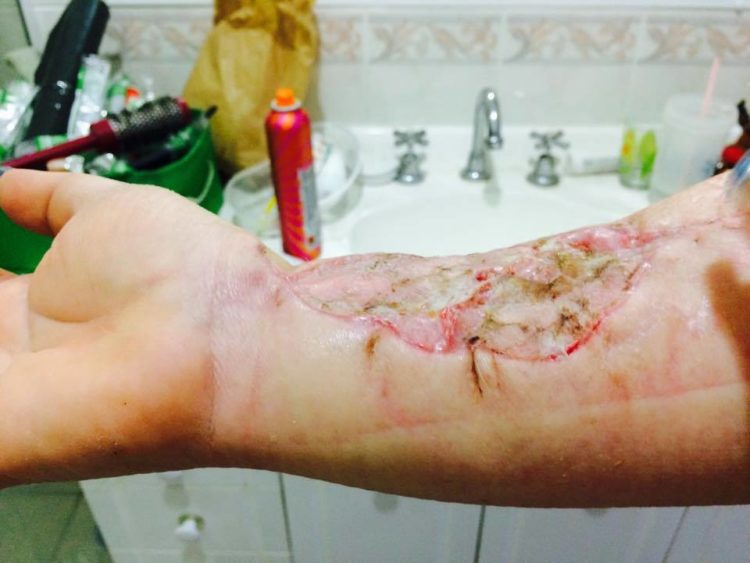 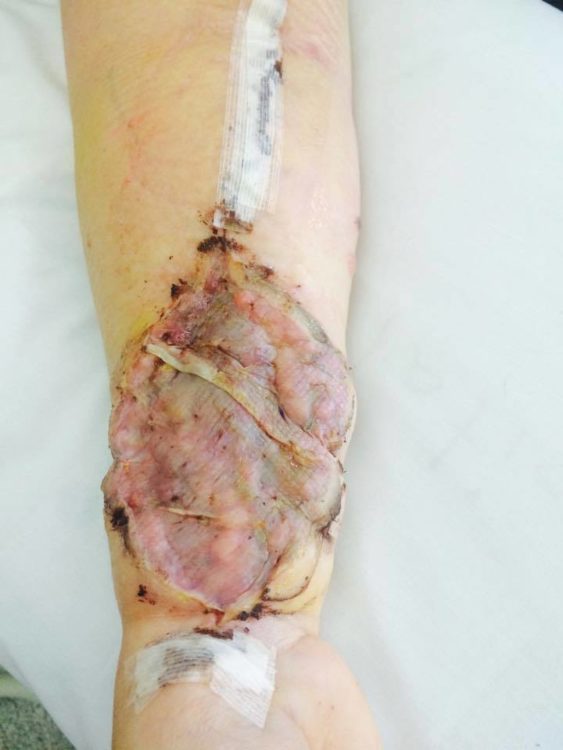 Dominy didn’t want to get out of bed to look at herself, but finally on day three she got up to shower and did. Her face was big and swollen and she thought she looked like a monster. But she didn’t cry. 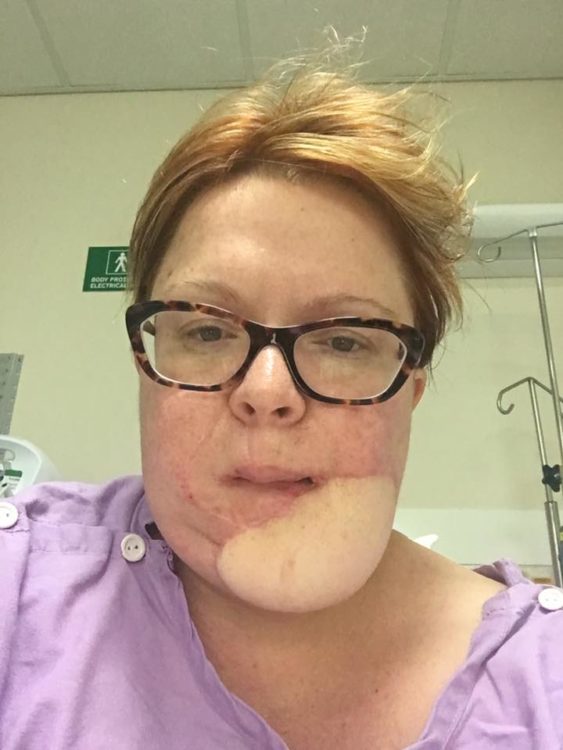 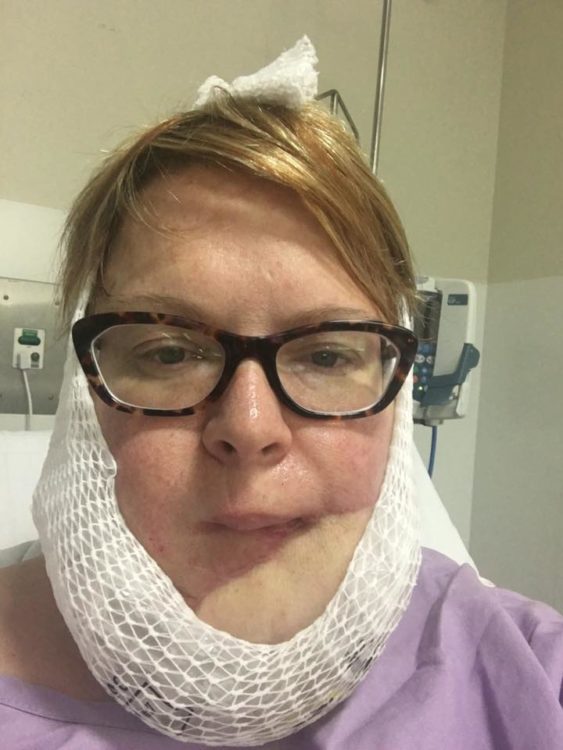 Over the next few days family came to visit and those who were true friends stood steadfast by her side. Her best friends even started calling her “Bud” because her mouth now formed the perfect “O” shape — like a blow-up doll — hence, the bud. 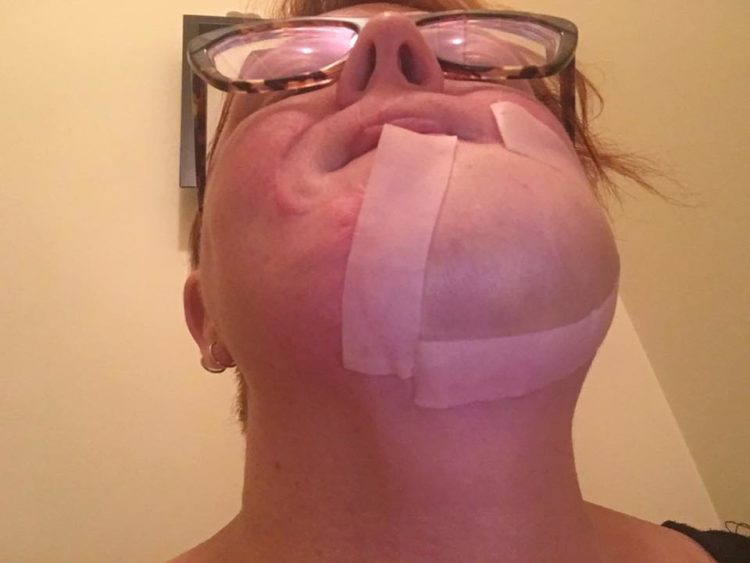 Dominy had quite the battle ahead of her as she had to learn how to use her arm again and talk properly. Pronouncing words was difficult because of the shape of her mouth, so every day in the hospital she had speech therapy and occasional occupational therapy.

It was then her “sheer determination” kicked into gear, and instead of being in the hospital for a month, as the original plan stated, Dominy was home within 10 days. Doctors told Dominy, she would only get 65 percent usage in her arm back where they removed the tendon and flap. Now she has 98 percent. 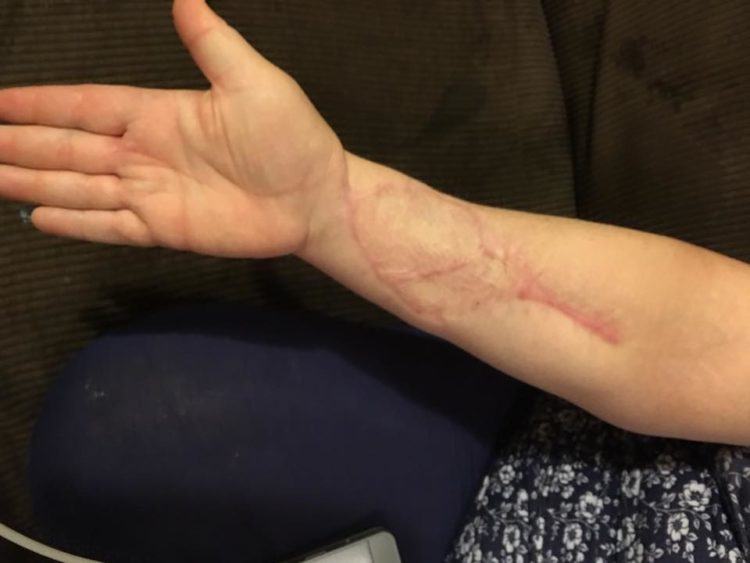 Dominy said her children have been strong and resilient during her entire recovery. Dominy remembers watching her daughter’s face remain unchanged the first time she saw her post-surgery. She even gave her mother a hug and told her about her day at school, as if nothing was different. Although it took a little longer for her son to see her (because he hates hospitals), he also was just as loving and accepting as before.

Since her initial surgery, Dominy has had eight other surgeries on her face, she’s had teeth removed, gone through debulking surgery to give her more facial definition, endured liposuction and has had the scarring on her arm reopened and shaved back.

For three of these surgeries, she’s been awake.

Her mouth is now much smaller because of these surgeries, so she drools a lot and sometimes spits when she talks. She can’t eat certain food and gets ulcers on the scarring inside her mouth. And every time she has a surgery, she wears a compression badge on her head for four weeks. She’s been called a real-life Monster High Doll while walking through a shopping center. Kids often point at her and ask what happened.

She says she had a fight with a shark and won. 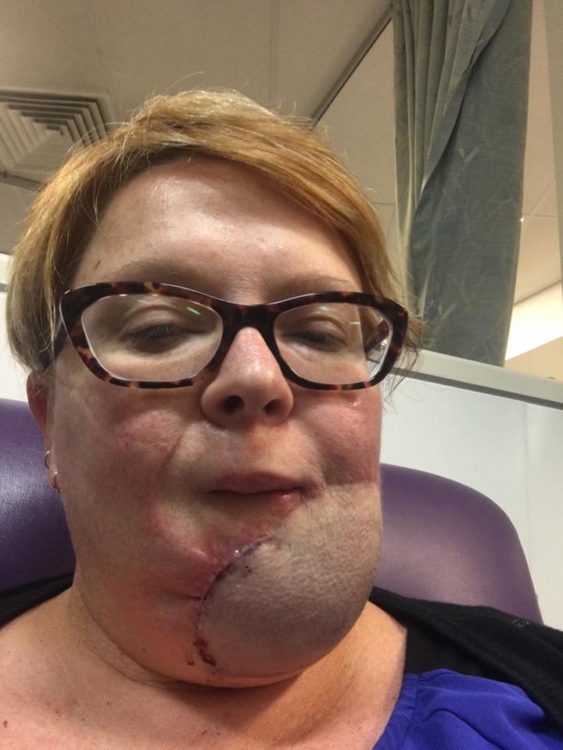 “I take regular selfies of myself,” she said. “This is my form of counseling because if there ever is a time where I do feel sorry for myself, I just go back and look at the photos and it reminds me of how far I have come.” 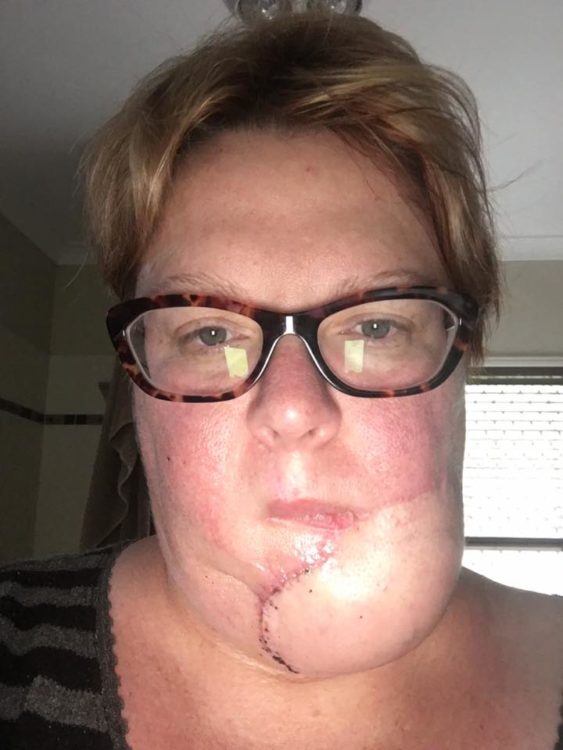 And Dominy has come far. She and Pete made it through some tough times before all of this, including painful IVF treatment to get pregnant, losing thousands on a dream home when their builder went broke and a dark period of depression for Pete.

When it comes down to it, Dominy says she’s still the same person on the inside. She’s got a great job as an emergency medical dispatcher for Queensland Ambulance Service, her husband constantly tells her she’s beautiful, her kids still love her and her friends are always by her side. 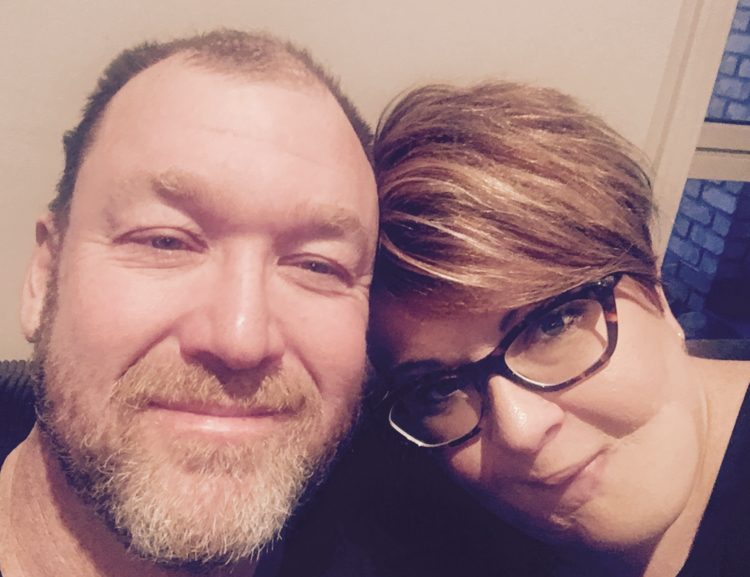 Dominy’s goal is to live a long and happy life. That means one day buying a house with Pete and watching her kids grow up. She hopes she won’t need any more surgeries, and wants to go on a proper vacation that doesn’t include recuperating from surgery. She also wants to live to be 100, which is quite possible since her great grandmother lived to 102. 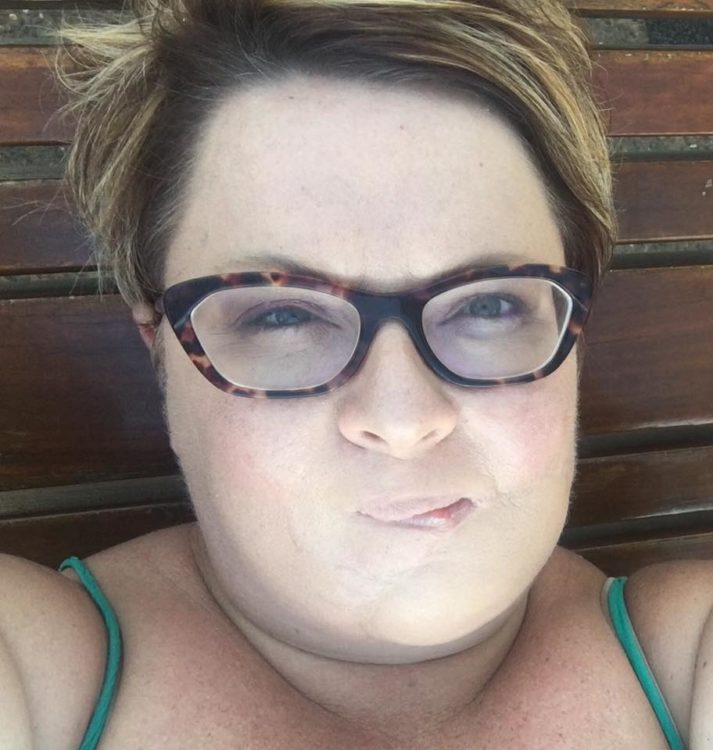 But most importantly, she wants to educate people about DFSP.

“Always check your body and if there is something not right don’t put it off for another day. Deal with it now!” 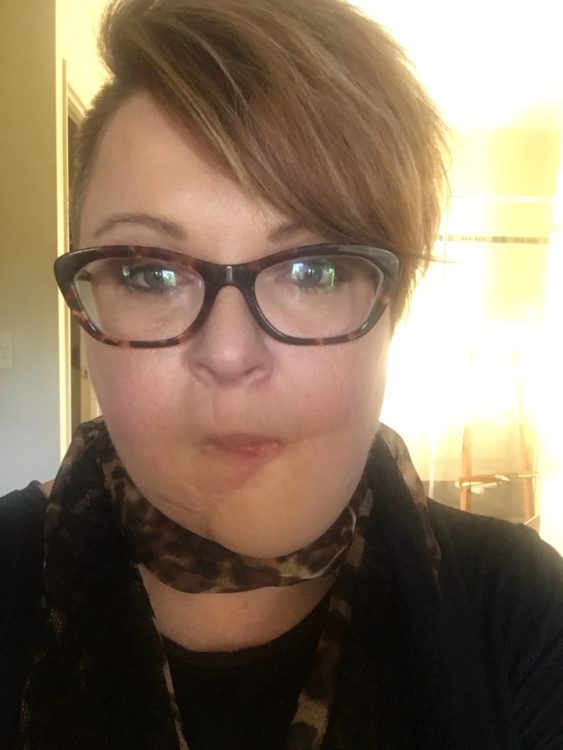 When Dominy was first diagnosed in 2014, she was one of seven people with the rare skin cancer on her face. Today those odds have grown. The support group she’s a part of has gone from a couple hundred to over 1,000. She wants to put an end to those statistics.

If anyone can help do this, Dominy can.

Trish is the Cancer Editor at The Mighty. She lost her father to stage 4 lung cancer in August 2016, and previously worked at a children’s cancer research organization, so she knows firsthand about the cancer experience. A lover of hip hop music, hot sauce and kimchi, she lives in Maryland with her husband, two dogs, cat and feisty 2-year-old daughter. Check her story out in the book, “A Letter to My Mom.“