I drove back from my son’s college concert near midnight. Exhausted, I glanced at my 14-year-old daughter, Beth, asleep in the passenger seat. We were only 10 minutes from home. I thought I could make it until I heard a road sign flatten on concrete. As the car flipped three times across a bare Ohio field, we left behind an ordinary life.

I escaped with cuts, bruises, and blood-matted hair. Beth was another story. The car was cut open to rush her to a helicopter. A doctor in Toledo told my husband John that she was paralyzed. When he broke the news to her, she paused only a moment before simply responding, “Let’s talk about what I can do.” 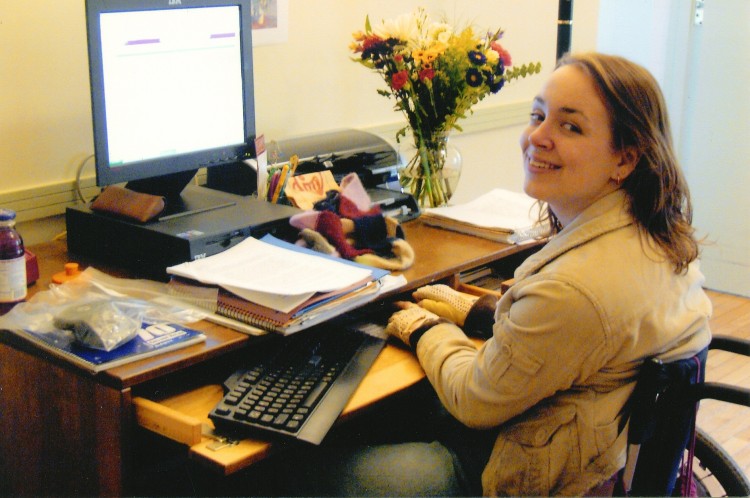 When I arrived, Beth lay flat, her pretty face swollen, her neck in a brace, in a maze of tubes and wires. She greeted me with a small smile. I should have felt gratitude for that, but I didn’t. I stared at the girl in the bed, disbelieving.
While Beth slept, a surgeon guided me to a chair. He was kind, but his words were devastating. The bones in her neck were shattered. After surgery, he told me her spinal cord was cut at C6-7. With all four limbs affected, she was a quadriplegic and would never walk.

The lower half of her lungs were paralyzed along with her organs. The loss of hand function seemed especially cruel. Her fingers didn’t work and the muscles began to shrink. Among many health risks, pneumonia stood out, a leading cause of death — along with suicide.

Long hugs with John. My parents walked in Beth’s room then stopped, visibly shaken. My strong dad’s tears fell on my shoulder. The only other time I saw him cry was when his father died. With one mistake, I had hurt everyone I loved.

Whenever I closed my eyes, I saw the upside-down car where Beth slumped to her stomach on the ceiling, her neck at a disturbing angle. The image haunted me. How easy it would be to lose myself under a blanket of guilt. Instead, I focused on small moments. Beth needed me. I turned her to the side, straightened a sheet, adjusted a pillow, and stayed in sight. Sleepy, she told me in a morphine haze, “I like it when you hold my hand.” Crying quietly, I could not make myself be grateful for the partial feeling in her hands.

When Beth transferred to rehab, we shared a room with a girl who made sad sounds in a crib with high sides. She was alone with a brain injury. We met a man with a spinal cord injury who needed a ventilator to breathe. He moved only his head. A teenager with paralysis in his legs refused to get out of bed and moved to a nursing home. He had full use of his hands and arms.

As physical therapy started, Beth lay face down on her stomach, unable to lift her shoulders off the mat. At all. The therapy session finished with a difficult process to transfer her into a wheelchair. Beth opened her arms and I leaned into a hug. Her bent hand softly patted my back.

Suddenly, I was grateful for arms and wrists that move. For lungs that breathe. For her ability to feel me pat her back in return.

After a month in rehab, Beth tried to sit up on the mat. She started on her back and concentrated on throwing one arm over the other to roll on one side. It took several tries. She pushed down with her hands to raise her upper body incrementally to a shaky sitting position for the first time. Her body tottered back and forth in a battle of balance. My instincts screamed to help her, support her. Instead, I turned away to wipe my eyes.

She leaned forward and planted a hand on each side to steady herself. She looked up and smiled when she heard me clapping with the therapists. She seemed surprised by, and glad for, every small thing.

My daughter insisted on starting her freshman year of high school on time about three months after her injury. The first day, she pushed herself slowly down the halls in a manual wheelchair. Four years later, when she moved into a freshman dorm at Harvard, she was independent with no assistant, a rare feat for someone with her level of spinal cord injury.

Beth’s attitude propelled her forward with me in tow. Little by little, I chipped away at my millstone of guilt. Sometimes we need someone strong to lead the way.

Now, all I see is what she can do.

The Mighty is asking the following: Share a conversation you’ve had that changed the way you think about disability, disease or mental illness. Check out our Submit a Story page for more about our submission guidelines.

A lifelong disability advocate, Cindy Kolbe is on a mission to share the power of hope and connection with those in crisis. Her new memoir, Struggling with Serendipity, tells about the road of hope she traveled after her daughter's paralysis— from a small town in Ohio to Seattle, Harvard, Capitol Hill, and around the world. And if you never give up? Hope wins. Check out her new book at bit.ly/memoiroffer.