We got the diagnosis the second day in hospital. Her neurologist came in and said, “I think she may have something called ‘Sturge Weber,” and then said, “Now don’t go Googling it.”

“Oh, I am already Googling it.”

I learned terminology like “hemangioma,” “angiomas,” “calcification” and so many more. These words moved nothing inside me. I didn’t understand them. But then came the words I understood: “seizures,” “glaucoma,” “blindness,” “mental retardation” and so on. I did what you thought I would. I looked up life expectancy, treatments, possibility of a cure. I researched day and night; I became a little consumed with it. I made up our minds that we would do whatever it took to fix this, to help her. We saw doctor on top of doctor on top of doctor; we did what we needed to do. I watched her seize every day, and there was nothing I could do. I held her down while she screamed during multiple needle pokes, IVs and tests. I missed time with my son, family and friends. Sleep was no longer an option, I’d cried so much that there was nothing left, I struggled to breath. We had to adjust our lives according to you.

The first three years of Harley’s life were extremely difficult and frustrating. I was angry all the time; everyone around me felt it, even when I tried to hide it. Harley spent three months in hospital due to an infection after HEMI surgery in 2012; she underwent multiple surgeries and treatments. It’s now 2015, and Harley has hopefully had her final surgery, due to the complications. Life is finally slowing down. I’ve cut out the unnecessary appointments, treatments and therapies because of what I’ve now learned. I’m not angry anymore.

I would take back the pain she endured but would change nothing else. I wouldn’t wish her to not have Sturge-Weber syndrome (SWS) because I believe that’s the same as wishing to not have her. I don’t think she would be the Harley we know today, and this would make you think you have beaten me, SWS. This would make you think you weakened me. Oh, no. You will not get that satisfaction, but here is what I will give you. I will tell you what we’ve gained. This will weaken you, this will make you small and this will invade deep down into your being.

What we gained was clarity about what really matters. We gained an understanding. You gave us the gift of watching her succeed and trying when she didn’t. We learned about others’ struggles, we saw acts of true kindness. I saw things differently; I found a purpose, the direction I should be going. Great relationships were built. I learned to appreciate the small things, to stop and literally smell the flowers. When people hear our story, they feel pity, sadness and I’m sure relief that it wasn’t/isn’t them. People think because she’s sick that maybe we don’t have anything to be thankful for. When people look at our children with SWS, I think they may see a huge burden.

Since you entered our lives, SWS, you’ve made us think twice. We take the bad with the good. We learned that we have an army behind us waiting to charge. This has made it easy to fight you, to manage you and even to thank you. If not for you, I don’t know that we would have ever realized these things, that we would have ever challenged the world, persevered and succeeded. The power of prayer has been even more imbedded into my core.

The biggest lesson is the love of complete strangers for my daughter; they gave for a little girl they didn’t even know, and they listened when we asked. You came into our lives out of nowhere and moved fast; we hit every bump there was, and I know there will be more. A part of me is grateful for you, a part of me calls you a blessing — it is crazy, I know. It’s  hard to see the positive or the other side of things when you have no control over what’s happening  to your child, but we do. The laughter, good and love is there; you just have to quiet the noise and search in places you never had to before. I still get angry and discouraged, but I find my way out faster each time.

So whatever you have planned next, I will continue to spread awareness and prepare for battle against you because I am a warrior. This is what you made me, and this is what you will give to her when she is older. She will be stronger, happier and fabulously beautiful so she can crush you with her heel and be proud to be who she is. People will not remember you when they hear our story; they will only remember the courage, love perseverance and smile of these children you’ve attacked.

We will survive you. 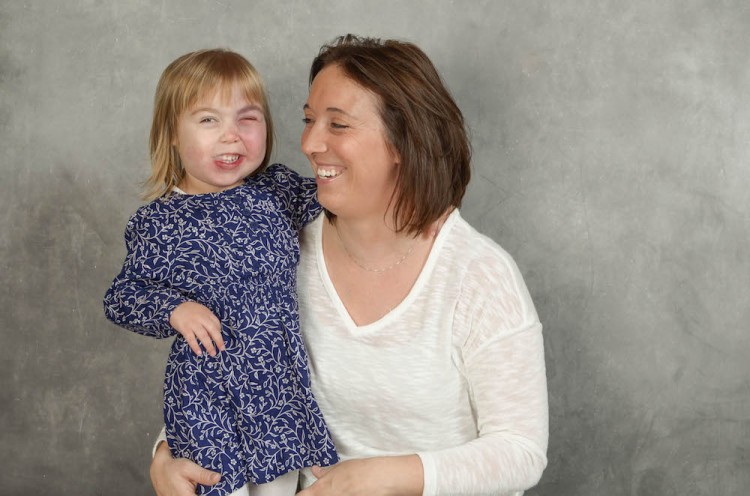 For all of March, The Mighty is asking its readers the following: If you could write a letter to the disability or disease you (or a loved one) face, what would you say to it? If you’d like to participate, please send a blog post to community@themighty.com. Please  include a photo for the piece, a photo of yourself and 1-2 sentence bio.

Candice lives in Ontario, with her husband, Tj and their two wonderful children, Gavyn and Harley. They try to focus on just being a family and letting the tough parts make them stronger. It’s about letting their children be just that — children — forgetting the noise and listening for the quiet.

candice-roberts
Want more of The Mighty?
You can find even more stories on our Home page. There, you’ll also find thoughts and questions by our community.
Take Me Home