What Driving Means to Me as a Person With a Disability

Driving is a huge part of being a teenager, but in a much different way when you have a spinal cord injury. Less than two months after I turned 15, I went to the DDS and took the online test to get my learner’s permit, incredibly excited to start learning to drive. But driving for me wasn’t so simple.

In 2010, acute flaccid myelitis (AFM) left me with partially paralyzed shoulders and arms, a weak right hand and a completely paralyzed left hand. Even with my physical disability, I was determined to drive — I just knew I’d have to do it differently than others. I’m unable to drive a regular car due to my disability, so I need adaptive equipment to drive. Because of this, I began pursuing adaptive driving at Shepherd Center (a rehabilitation facility for people with spinal cord injuries and traumatic brain injuries) since they have an adaptive driving program.

Unsurprisingly, it seems like most people don’t know adaptive driving exists, which contributes to the misconception that people with disabilities cannot work or live active, happy lives. My friends seemed to assume I could drive a regular car like everyone else, and if they gave it more thought they asked me how I’d be able to drive — if at all. I told them I’d need adaptations, but I wasn’t quite sure exactly what I needed until I made an appointment with the adaptive driving department at Shepherd Center in December 2016.

I was newly 15, so I was quite young and anxious to try driving, but also excited. The guys at Shepherd Center drove me to a nearby neighborhood in their enormous van (because it accommodates wheelchair users) that had all the adaptive driving equipment one could possibly imagine, and I tried driving for the first time for an hour there. It was pretty terrifying, as driving for the first time is for anyone, disability or not, but the instructor had a brake on his side of the vehicle, which made me feel more comfortable.

I struggled with using the pedals because I couldn’t find where they were without looking at my feet, but I drove well using a joystick to turn the steering wheel left and right. Because of this, when I decided to drive at Shepherd Center again in June 2017, I used a joystick to steer and do the gas and brake so I wouldn’t have to worry about the pedals. It was much easier for me, but the downside was I couldn’t take my right hand off the joystick at any time, or else the car would start rolling.

I found it so incredibly cool that equipment like this existed, and I couldn’t believe I was driving. But I didn’t enjoy driving as much as I thought I would. I couldn’t help but look ahead and think about how many more weeks I’d have to drive at Shepherd in order to get my license. I’d barely gotten out of the neighborhood during the week, so I found myself getting discouraged with my progress. I was anxious when I got on the real road, scared I would crash, and I didn’t find the experience fun, but stressful. 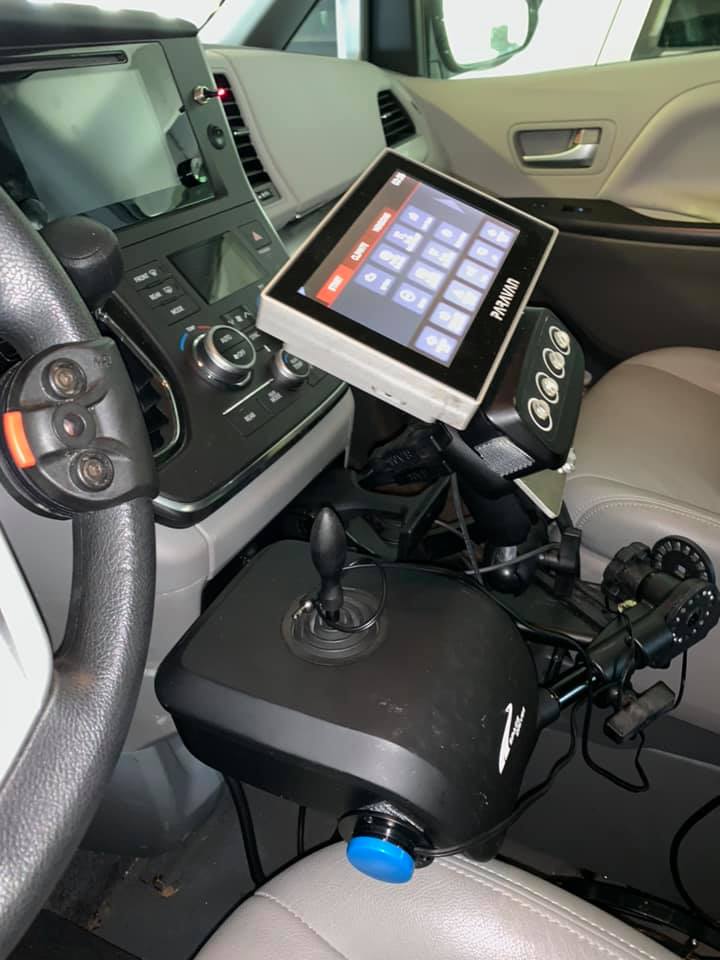 Learning to drive with adaptive equipment is so much more difficult than without. Not because the equipment is difficult to use — it’s not, especially since I’d never driven a regular car before — but because I can’t practice at my leisure whenever I wish. I have to make an appointment with Shepherd Center and drive using their vehicle for a week, around four hours a day. It’s incredibly tiring to drive for so many hours every day for a week, and it stinks having to wait for the vehicle to be available so I can practice.

Fifteen was really young to start driving (even though most people begin learning at that age where I live), and it was a lot for me. So I put off learning to drive, but once my friends began driving, I desperately wanted the independence they had. Whenever they talked about driving, I would feel jealous, because I so wanted to be able to go to Chick-Fil-A or the grocery store or a friend’s house on my own. My desire to drive eventually became so strong that I’d even feel angry when they complained about driving or traffic or anything to do with it, because I felt that everyone who is able to drive is so fortunate they can.

Learning to drive with a physical disability takes extra determination and grit that learning to drive without one does not, but I felt I’d mustered up such determination and grit to begin driving again.  In June 2019, I did another week of driving with Shepherd Center, and I was so pleased to discover I could actually drive with the pedals. Driving was so much easier when I didn’t have to rely on my right hand for nearly everything, and I got out on the real road fast. I used the joystick to steer left and right, a button I could hit with my leg for blinkers and the horn. I accidentally honk at people a lot because I hold down the button until it beeps twice for left blinker, three times for right blinker, and four times for horn, so it’s easy to accidentally honk! It has a touch screen for starting the car, wipers, windows etc. and buttons to change gears.

The equipment is extremely high tech and so cool; everyone I know is so interested to hear about how I drive, because they’ve never seen anything like this before. And I love telling people how I drive, because I want people to know that people with disabilities are capable of being independent.

After the week in June went so well, I was so excited to drive for another week in August and get my driver’s license at the end of the week. I parallel parked, backed into a spot, backed up 50 feet a million times and perfected driving on the road. At the end of the week when I passed my road test and got my driver’s license, tears came to my eyes, because learning to drive has been such a long time coming.  My hours and hours of practice really paid off, offering me the very independence I sought after.

It’s so nice that adaptive equipment exists for people with disabilities, but I wish it wasn’t such a huge feat to learn to drive and get a vehicle. Now that I have my license, I have to try to find a car that will be suitable for me, and once I complete that search, installing the adaptive equipment will take about four to six months. Paying for the equipment is another thing; it’ll cost more than twice the amount of the car itself to buy the equipment I need. It’s awful that equipment for people with disabilities is terribly expensive, because there’s really no reason for it, but I’m hoping that will change within my lifetime.

At this point, I’m antsy to get a car of my own, but I’m trying to be patient. Once I have my car with my equipment, I’ll have so much fun cruising down the roads (and occasionally accidentally honking at people!) My newfound independence is going to be life-changing, that is for sure.

What’s your experience learning to drive with a disability?

When Sarah Todd was 8, she developed acute flaccid myelitis, a rare disorder caused by a direct viral attack on the spinal cord. Now, at age 20, she has written and published 3 books — “5k, Ballet, and a Spinal Cord Injury,” “Determination,” and "Up and Down" with co-author Jen Starzec. All three books are available for purchase on Amazon and Lulu. Visit her website: www.sarahtoddhammer.com

sarahtoddhammer
Want more of The Mighty?
You can find even more stories on our Home page. There, you’ll also find thoughts and questions by our community.
Take Me Home