Unmasking the Reality of Life After a Traumatic Brain Injury

My wife Shelly recently surpassed the six-year anniversary of her injury. Her life has been forever changed by this. I can’t stress enough how life-changing a TBI can be for the survivor and their family.

Shelly received her injury when a bottle of homemade ginger ale fermented and became a bomb that exploded in her face, knocking her out for over 20 minutes. The cognitive symptoms were slow to develop, but within two weeks she was unable to walk or talk. Her recovery since has been a slow road of patience, determination and hard work. She has come so far, but she still has so far to go.

We constantly find that people want to focus on the weird circumstances that led to her injury. It’s almost as if they are trivializing and finding humor in the accident. They focus on the novelty of the story, whereas I wish the focus could be on her and how difficult her daily life has become.

Shelly was recently asked to become involved in an an amazing international project called Unmasking Brain Injury. Its objective is to have each person living with a brain injury create a mask depicting the hidden feelings behind their brain injury, in an effort to raise awareness throughout the world and to give survivors a voice. The goal of the project is to identify the feelings associated with the survivor’s brain injury, using the mask to help develop and describe their story. They translate these feelings into shapes, colors, images and words to develop and create their particular mask.

This project is increasing awareness and educating our communities about the impact and prevalence of brain injury. I was really excited for Shelly to become involved in this project because she is unbelievably artistic and creative. I knew expressing her new reality through art would be very powerful, therapeutic and helpful for others. But I was not prepared to be as impacted by what I saw once her mask was complete. The tears rolled down my face as I saw her perfectly express the description of her life since the injury. It’s such a poignant presentation of her journey. 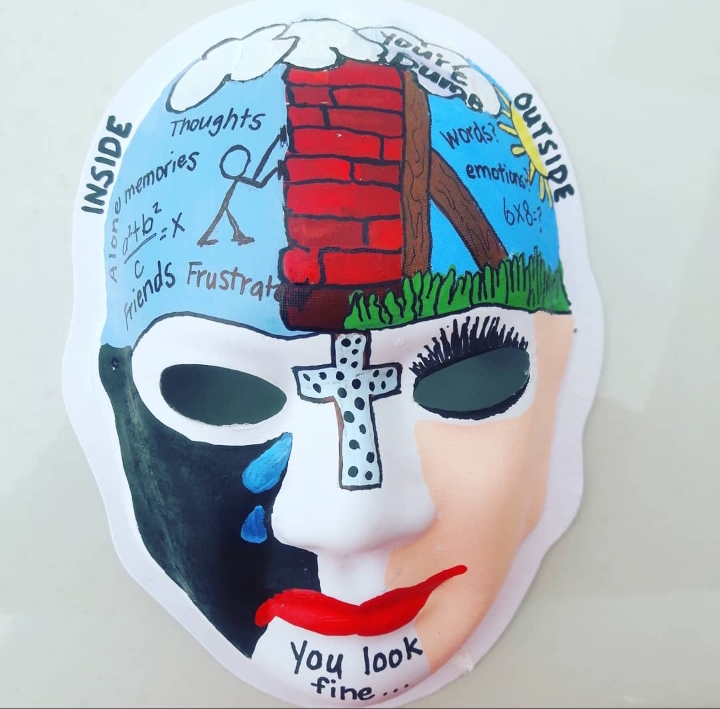 The thoughts she has, but forgetting the words before she can say them.

The many forgotten memories of her past.

Once great at math, now unable to multiply in her head.

Very few friends coming around anymore, which has led her to feel frustrated and alone.

The brick wall is a symbol of the barrier she feels between what is inside her brain and what she can actually do. She tries to push through the barrier, but it is strong and won’t budge.

She feels disconnected from her emotions and feels foolish because she can’t do the things she once could. The way the world around her makes her feel “stupid” at times is like a dark cloud hanging over her head.

The cross symbolizes how she has continued to stand strong in her faith. At times she feels empty and sad on the inside because people don’t understand.

She wants to scream “I am not!”

She is not who she was before. She struggles each day to do things. She puts on a smile and looks OK, but she is not. She feels broken.

She wants to tell people to please shut up and quit whining about the trivial stuff.

I am constantly reminded that Shelly is truly my hero.

How do you use art to express feelings surrounding your disability or illness?

Bob has endured a life filled with adversity and loss. After decades of struggle, Bob gained the tools to emotionally recover and view all aspects of his journey with perspective and gratitude. Now a primary purpose of his is to share his experiences in order to assist others in effectively navigating through their own journey. Follow my journey at my blog, Ten Thousand Days. Link is below.