My husband and I call our son the “Sour Patch Kid,” because like the candy, he can be sweet and sour. Typically he saves his sour behavior for home. From the time he started early education, he was often praised for his good behavior while at school. My earliest memory of his “patchy” behavior began in the first year of early intervention. One of the biggest issues I saw at home was him beating his head on the floor. I took him to class and discussed the matter with the therapy staff, and they couldn’t believe he would exhibit that behavior. He continued to do exceptionally at school, and when we got home, he’d be at it again.

Even as he got older, he had the staff wrapped around his finger, and then he’d do something like whack me when we got home. We have discipline in place, and he sometimes ends up in time-out frequently. Most of the time it helps curb his behavioral problems, but he’s continually testing the water with me.

For example, today we waited for his bus and it was running a half-hour late. He waited inside dressed in his outerwear. I know it can be hard for him to understand why he has to wear it when he feels like he’s going nowhere. He took off his gloves numerous times, threw his hat, jumped on his sister and did other little things to show his displeasure. I sat him in time-out twice and reminded him that I wanted the gloves on his hands and he needed to behave. He head-butted me in the face.

He got a longer time-out for hitting his mom. Shortly after, the bus finally arrived, and out came his sweet side. That afternoon, the bus pulled up, and he happily called for me. He waved goodbye to his friends and jumped in excitement as the bus pulled away. On the way back to the front door, he whacked me. “Really, little dude?”

This behavior has baffled us since he started showing signs of behavioral issues. They refer to the period of time before the kids are ill-behaved at school as a honeymoon phase because they eventually have the same problems at school. I’m thankful that hasn’t been the case with my little guy. He’s still just as sweet as can be at school and much more rotten for me. It’s sad because I often feel like everyone else gets the best of him. The most frustrating thing is hearing from family how well he behaved until we walked in the door. That comment happens a lot, and we always have the same response. “We don’t know. We are just as lost as you.”

On top of trying to unravel his medical issues, the behavioral problems are the cherry on top. It’s daunting. Some days I feel like he’s in time-out three times more than the other children, but we’ve decided to be consistent and require him to follow the same rules as the other children (although he’s allowed an additional warning or redirection of behavior). Nonetheless, he requires and demands a lot of attention, sometimes using the sweet and cuddly side or the sour side. I prefer the cuddly side, and no matter his mood, I try to sneak a hug and kiss in, even if he doesn’t like it.

My theory is he knows home is his soft place to fall. He’s comfortable here, and he knows he can take his frustrations to me. He has a gap of cognitive development that has slowed his language and prevents him from being able to communicate how he feels or what he wants. He has bad days where he’s more tired or weaker than usual and is unable to convey that to me. He has no way of understanding why he feels that way. He’s frustrated, so he takes it out on the one person with whom he feels the most comfortable, me (or his dad when he’s home). I’m stern with him, and I’ve yelled. It’s a crash course in patience every day.

Today when he came home, he crawled in his beanbag chair, covered up and fell asleep before I had time to ask about his day. It happens a lot. He comes home from school and crashes. Today he had a seizure at school, so maybe that whack this afternoon was his way of telling me about that unpleasant event and how it bothered him or made him tired. He feels like he can be himself at home, and isn’t that what we all want?

Tonight he slept through the noise, dinner, baths and craziness of our evenings. It breaks my heart. I believe his disease (tuberous sclerosis complex) steals so much from him. It steals time with him away from me. My time with my little buddy is precious. People close to our family forget how sick he is. The truth is, he has more going on than most people have to encounter in a lifetime and does pretty awesome.

I wish more people would look past the sour patch and remember there’s a little boy inside missing out on so much at the hands of his disease. I know I’d take any additional time with him I could get, sour patch and all. 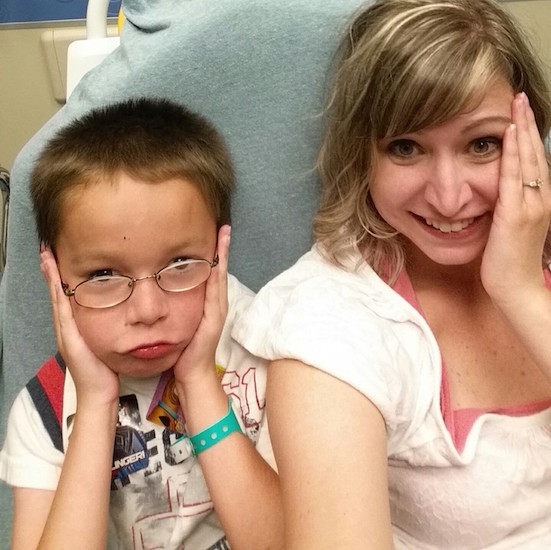