I have been thinking about how I wanted to mark Undiagnosed Day 2018, and we actually had an unfortunate incident happen this week that precisely plays into why undiagnosed disease awareness is so important.

To the doctor who used the “R-word” in reference to my son:

I would first like to point out that when we met with you in January 2017, you did in fact spend a good deal of time and patience with us. You also offered what little you could, by putting John’s genetic material into the research program so it can be reanalyzed every six to 12 months as new technology and information becomes available. Seeing as we had met with almost every department worth trying and ran every test possible, you were very empathetic to our disheartened state and told us we should focus on what we do know. “Let’s see John back in a year, and we’ll go from there.”

Well, January came and went. I had to initiate setting up what was supposed to be a yearly check-in, and ask other departments to help me in doing so because I was not getting any return calls, nor was it even possible to message the department through the hospital’s patient app.

John and I arrived, waiting perhaps a little longer than we should have. However, this is a children’s hospital. I get it. What I don’t get is that during our obligatory 15 to 20-minute appointment, you never once asked for John to get out of his stroller so you could assess him. You simply asked how the past year has been. Well…it’s been pretty eventful, what with surgery, procedures, glasses, hearing aids, getting the flu twice, and now the same GI issue he had last year is back. I get that GI is not your specialty, but that is the current major issue with John, it’s been a problem for two months now, and we’re trying to get to the bottom of it.

I did actually. The one genetic test result that showed anything at all indicated that John has an insignificant variance on a gene having to do with stature. I know this small variance does not and would not explain everything John deals with, but could it explain one thing? Is it worth pursuing even a little bit? And your reply was that “John has a duplication of it, and a deletion would (essentially) mean more. Either way, this variance would really only ever explain stature. It would not explain (hand gesture motioning toward John) mental retardation.”

[Pausing to let that sink in.]

I will admit I was too shocked and stunned to reply and react immediately. I am nothing if not terrible at comebacks in a timely manner. You excused yourself, but not before asking if I wanted to see a PT and OT that may be floating around the department.

It should be noted that audiology was the next appointment, and bless Dr. L’s heart. I think I cry every time I see her. She was horrified at what I told her had just happened. But she also told me that some of her patients also see you, and those parents have also cried to her, saying that you and perhaps other members of the neurology department have used the “R-word” with their children. She went above and beyond, recognizing and praising John for his abilities that were clear as day, right in front of her nose. She took it one step further and pulled strings to get him a developmental speech and communication evaluation, so that we may have a better idea of how he might best be able to learn to communicate. It took Dr. L almost no effort to be overly kind, generous, and positive.

I say all this, because this is the material point you and your colleagues need to know. That word, first and foremost, is offensive. It is antiquated and unfair when labeling a 1-year-old.

Does John have a lot of challenges? Yes. Obviously. As a doctor, you can also ask me what he can do. He can absolutely make it known that he is tired, hungry, and upset. He can laugh, roll his eyes, give the best side-eye I’ve ever seen, and loves to squeal. He can play with his toys, has his own signs for “no/all done/go away” and “yes/more/right now.” He can hold his head up, roll over, hold his own sippy cup, and bring my hand to his mouth when I feed him. He likes therapy if “Daniel Tiger” is on, and he can turn pages of a board book.  I swear knows more than he lets on because he laughed at all the right parts of a recent episode of the rebooted “Roseanne.” Again, he is a smart kid. 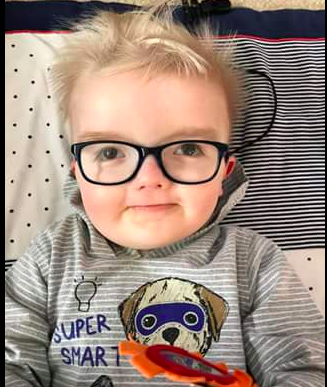 I know we are just another number to you, but you are (or were) one of his lifelines. He is an undiagnosed child, and as a parent, that means my husband and I have grasped at every straw we have ever seen, trying to help our son. Literally no one can explain his condition. No one. I simply had asked if this one tiny thing may be anything, and with your reply you replied with an offensive, outdated term to describe my son.

Why you would say that to any parent is beyond me – especially to a parent of a child with an undiagnosed disease. I have nothing to go on as it is, and no clear trajectory for my son’s life. I’m coming to you because you may be one of the few that could find something someday. I’m not sure if he is not worth your time, you were having a bad day, or what. I’m sure you’ve long forgotten about the whole thing, but I am awake at 2 a.m. on the couch next to my son’s crib in our former downstairs playroom.

I may not have decades of higher education and letters attached to my name, but as John’s mother and the person is who is around him 24/7, I believe I deserve more respect. You may be brilliant in your field, but I am an expert on my own kid and no one knows him better than I do. Even my husband will attest to that. When I ask questions, it’s so that I can continue doing whatever I can to find the next thing, place, doctor, or whatever it is that may help John in any way. I know you didn’t come out and say “he won’t ever do such and such,” and he may not. But I’ll be damned if he won’t have the opportunities. Every child has potential.

So here’s my advice to you when interacting with families with medically complex children:
1. Don’t ever use the “R-word” — especially when talking to a parent about their child. “Intellectual delay” or “intellectual disability” is much more appropriate and actually more properly defines what you were trying to convey.
2. Remember that just because a child cannot do certain things, does not mean they don’t have potential.
3. Don’t ever label a 1-year-old’s intelligence. I believe my 4-year-old with severe speech delay has a better understanding of human decency than you do.

Perhaps this will get back to you someday, and I hope it does.

I am a mother of two boys, farm wife, rare disease warrior, and live in PA. My youngest is undiagnosed but has the best judgy faces on the planet.