Schools Must Provide More Opportunities for Students With Disabilities

The Supreme Court ruled unanimously in favor of higher educational standards for children with a disability in one of the most important education cases in decades.

The vote was unanimous.

In 1975, Congress passed a federal law requiring  a “free appropriate public education” for children with disabilities.

Drew, a boy with autism, wasn’t receiving adequate education in public school so he was moved to a private school by his parents.

The school district refused to reimburse tuition as required by law.

The Denver Courts ruled in favor of the school district,  stating that Drew received a “benefit” that was “merely more than de minimis.”

The Supreme Court accepted Drew’s parents’ challenge to that decision and ultimately rejected it.

The supreme court ruling stated that schools must do more than provide “merely more than de minimis” education for students with a disability,

And instead provide them with the opportunity to make “appropriately ambitious” progress.

“As someone with a disability, who also knows what it means to parent a public school student with multiple disabilities, I am thrilled with this decision.” -Jennifer Laszlo Mizrahi, president of RespectAbility.

“Every child should have access to the education and skills they need to succeed.” 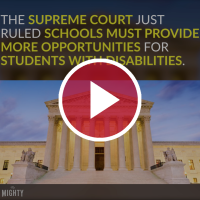