When Smith, from the U.K., was 12 weeks pregnant, she learned one of her twin daughters, Skye, was not going to make it due to a condition called anencephaly, which has a zero percent survival rate.

According to Smith’s Just Giving page, when she was 30 weeks pregnant she went into labor – giving birth to daughters Skye and Callie. Callie was placed intensive care, while the Smiths spent three hours with Skye before she passed away. “When Skye passed, it felt like my world had ended, even though I had Callie, my heart was broken,” Smith said.

While visiting Callie in the hospital nursery, a parent of twins turned to Smith and said “You are so lucky you just have one,” Smith told Babble in an interview. “They weren’t to know that I did at one point have two… I didn’t have the heart to tell them what had happened.”

“I had had seven months to prepare for this and still the pain was unimaginable,” Smith said. “At this moment I decided I needed to help families in a similar position.”

So Smith came up with a way to help families grieving the loss of a child in a multiples pregnancy – a sticker. 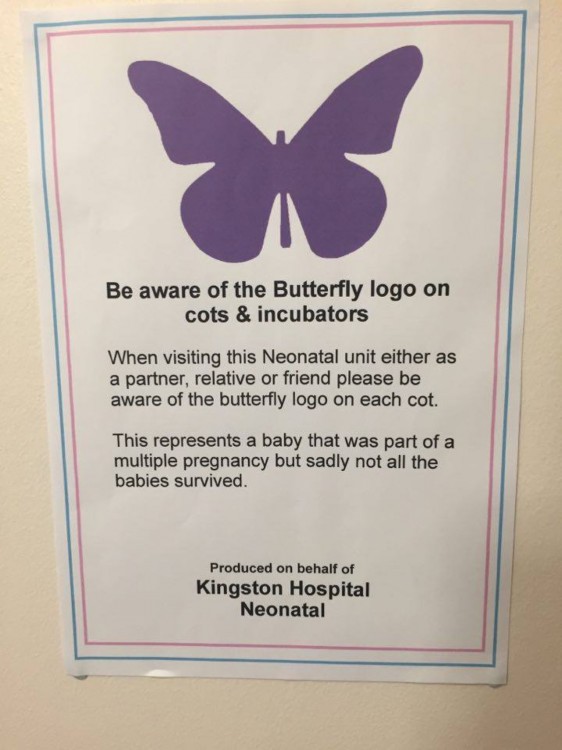 The sticker, a purple butterfly, is meant to be placed in the newborn’s bassinet to indicate the child is part of multiples pregnancy where the other sibling didn’t survive. Smith hopes by making visitors, other parents and medical staff aware of the situation – grieving parents will be spared the pain of having to repeat their story.

Through her Just Giving page, Smith is fundraising to help bereaved families. Funds will go towards educating hospitals and providing more purple butterfly stickers as well as other services for families coping with child loss.

“Ultimately I will never be able to stop this from happening, but the more support groups we can set up and put things in place like the stickers the better it will be,” Smith told Babble. “It’s the hardest thing anyone has to deal with.”