What's It's Like Waking Up With a Panic Attack

I’m awake, but my eyes are still closed. Maybe, I can go back to sleep if I don’t open them. Maybe… and before I can think about anything else, there is a rush of sadness with its claws out, slamming against me like an angry wave.

It’s like a punch in the gut, and it knocks all hopes and strength out of me. The claws scratching your insides, while the wave has smashed you so hard against yourself that it feels like death, but death never comes.

Instead, there is more pain. There is less air, and your heart feels like it is beating so hard it will burst out of your chest. Your hands and feet start to freeze, as if they no longer belong to the same body that feels on fire. You feel light headed, and your breath becomes shallow. It feels like it will never end.

The doom that has surrounded you as you’re falling through yourself and in a black hole, where nothing familiar exists, stretches you so far that you feel like breaking. I feel like I’m being held by an invisible hand over a massive cliff, and I just won’t die. If it lets me go, then it could all end. It would be painful for a bit, but then black and into what I think will be a blissful nothingness. Instead, I’m hanging in mid-air, arms and legs flailing about, too scared of the darkness that surrounds me.

I’ve been awake for two minutes, and I am drained. I roll over to my side and open my eyes wide open with the hope that… and there is another wave, bigger and stronger. I am frozen. I feel like I’m drowning in painful memories of yesterday and in thoughts of the real world that awaits me today. A world where no one knows I’ve already drowned, I’ve already survived and I wish I had just died before I’ve even had the chance to turn off my alarm.

I fall deeper through the black hole as it occurs to me I have nowhere to go. There is no safe place to go and hide for the day. There is no safe person who isn’t at least slightly confused and annoyed by my dramatic emotions. I feel cold while I feel like the blanket is strangling me. There is a buzzing sound in my ear. You know, the kind that you get when you are some place abandoned and secluded, where there isn’t a single sound.

I feel it fill my head and start making it more difficult to breath. I feel like the walls are closing in and I might suffocate, but I don’t. I want to run away.

I want to sleep, I’m so exhausted. Sleeping isn’t an option when waking up is so terrifying. I want to scream, but that doesn’t make sense. I’m not “crazy”… I’ve just lost myself — or am I?

I start to think of people who can help, but I’m not sold on the idea. It will be hours before I can reach out to anyone. What would I even say? I am scared to be alone with myself. I feel alone and terrified. I feel like a child who has had a nightmare and needs to be consoled. I want to sleep, but I need you to be here when I wake up because that’s the hardest part. I want to die.

I can’t say any of that. None of those things are acceptable to say, even if you are in excruciating pain. I am not bleeding or physically broken. I do not have a fever, even though I think my insides are on fire. There is nothing visible to show for the hell I’ve just gone through. My head is pounding, and I feel like vomiting everything that is boiling inside of me, but nothing comes out.

I sit there for a short while, and I can feel hot tears stinging my eyes. There is something sharp that is squeezing my throat. At that moment, I feel so sorry for myself, so sorry for carrying all this pain and so angry for not being able to let it go. I want to scream again.

I want to know why? Why doesn’t it get better? Why doesn’t anyone see? There is no answer, and I feel just a little more alone.

We want to hear your story. Become a Mighty contributor here.
Share
or  Copy Link
Link copied to clipboard.
6
2.4K 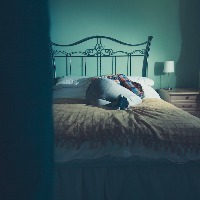