I broke one of my own rules: I read the comments.

Like many watching last Monday’s presidential debate, I was bewildered to hear a presidential nominee insinuate that our cyber security could be put at risk by “someone sitting on their bed that weighs 400 pounds.” Then, at a commercial break, I listened as Alicia Machado describe this same presidential nominee’s fat-shaming of her during her reign as Miss Universe.

According to Machado, she’d gained 18 pounds after being crowned, prompting Donald Trump to ridicule her in the press, calling her “Miss Piggy” and sending reporters to film her working out.

The pressures to remain beautiful in the eyes of the world sent this 19-year-old woman into a rabbit hole of anorexia and bulimia.

A blurb from The Guardian put it best:

But when she put on weight soon after winning, Trump turned what should have been a golden year into the most traumatizing one of her life. It wasn’t just that Trump shamed her about gaining weight, calling her things like “Miss Piggy” and “an eating machine.” It wasn’t even that he did so publicly. It was that he did it with the biggest audience he could find, in an attempt to sear her weight fluctuation into the public consciousness, forever changing how she would be remembered.

Listening to Trump’s words and reading the fat-shaming filth took me to a dark place. I was no longer a 36-year-old, self-actualized woman. I was a self-conscious teenager, trying to remain invisible in the hopes that I’d make it through a day without being made fun of for my size 14/16 frame.

As I read the comments criticizing Ms. Machado’s numbers, I reviewed my own:

5 – my age when I first remember being teased for my weight, while wearing a swimsuit.

13 – my age when I was chosen to be an eighth grade cheerleader.

3 – the number of hours before I began fielding prank calls congratulating “the chubby girl” on making the squad.

17 – my age when, after three tries, I finally made my high school drill team.

1-2 – the number of dress sizes I was told to lose if I wanted to be allowed to perform during half time.

45 – the number of calories in an orange, my preferred lunch senior year of high school.

One offhand comment when I’d been on this earth for five years was enough to implant a permanent fun-house mirror in my brain for the next 31.

One offhand comment from this presidential nominee is enough to begin picking at the scabs I allowed to form over my childhood wounds. One year of campaigning later, the scabs are gone and the blood is gushing.

I’ve never met Donald Trump, but I know him. He’s the guy who used to prank call me. The woman who made me order uniforms a size too small and told me to spend the summer finding a way to fit into them. He’s the frat guy at a crowded bar who would ask for my phone number as his buddies howled with laughter behind him. And he’s one reason why my self-esteem dropped so low that for years I thought my only source of control was to throw up or over-exercise to prove my worth.

His words matter because a new generation is listening to a presidential nominee tell them they are not enough. That they should be hidden. That they are lazy, dangerous, undesirable, a joke, and that their value is conditional. And if they are by chance enough right now, they better hope to God something doesn’t happen to change that.

When you’re looking to November 9, assuming the worst and ugliest is behind us once the election is over, remember that words have a long-lasting impact. Even when they’re past tense. It will take a while for the scabs to form again. 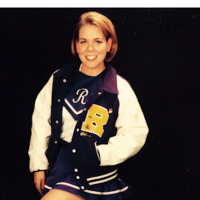