Last month, I survived the four-year anniversary of my younger sister Danielle’s suicide. She died on November 22, 2012, just two weeks after we celebrated her 24th birthday. She was my only sibling, and to say we were close is to understate our connected senses of humor, our deep friendship, and our infinite love for one another. Danielle struggled for the last two years of her life with post-traumatic stress disorder (PTSD), and, although I was aware of the depths of her suffering, her suicide still shocked me. Four years later, I continue to wake up to this shock every morning.

Danielle was an incredible human and a wonderful sister. Even though she was younger by three-and-a-half years, I looked up to her and needed her guidance. She loved openly and with raw force. She tried to make the world a better place for her friends and her family. Her jokes were brilliant; she teased out the absurdity of life in a matter of a few words or a facial gesture; she made even the stoniest-faced people chuckle. Her own laughter was infectious. With just a few words, she could put me into near hysterics. She loved her service dog, Bruno, with a maternal pride and joyful glee that she shared with others. She was also bright and self-motivated: she majored in Economics and German Literature as an undergraduate student before working as a computer programmer in Germany.

Four years ago, the world became a darker place without my sister’s light and laughter in it. I have struggled to survive these years, and I rely on my memories of Danielle and her strength to guide me. Now, as a sibling survivor of suicide loss who has just entered my fifth year of grief, I find myself in a strange liminal space. I am no longer “recently bereaved,” for I do not need the same resources as I did in the weeks and months following my sister’s death. Yet, my loss feels recent: I still feel my sister’s presence and yearn for her return. I no longer laugh the way I did with Danielle, and I still feel lonely without her by my side.

In the first few days after Danielle’s death in 2012, I could not imagine how to survive the shock, the questions, or the emptiness. I had rarely gone a day without talking to or texting Danielle. Now I would never be able to again. To think about the future, even only a few weeks in advance, would cause me to panic and shut down. I only knew myself as connected to Danielle. I could not imagine any life moments, either mundane or significant, without her. However, the days did indeed pass. Then came the weeks, the first month, three months, and six months. I learned the timeline of grief is a paradox: time passes both too slowly and too quickly. At some point, I lost track of the exact number of days or weeks I had lived without Danielle by my side. That is, until the first anniversary of her death approached. A year without Danielle had been unthinkable, unspeakable. More than that, impossible. And yet, there I was: I had survived the first year.

During the first year, I reached out to online communities of “Sibs,” who are other sibling survivors of suicide loss. Years later, they are still my community and people I speak to almost every day. As a tight-knit group, we Sibs help each other navigate the extreme ups and downs we face on a daily basis. We share our darkest questions and fears, the thoughts that keep us up at night and the nightmares that threaten us when we can escape insomnia. So many of our emotions and thoughts are shared. We are a community of grief and survival.

Because my sister died on Thanksgiving, all winter holidays have become too much to bear. My parents and I fled to Hawaii at the end of December of 2012, grateful to be invited by friends who sat with us while we cried in the evenings, after the bright sunset into the ocean, leaving us surrounded by a dark ocean and our horrible reality. We returned to Colorado before New Year’s Eve. I could not imagine going into a new year without Danielle, so I decided we would go to the cemetery and light candles at midnight and ring in 2013 with her. Accompanied by my parents, this has become our new tradition.

During the second and third years of grief, I still felt overwhelmed by emotional upheaval. I was surprised by how drained I became during November, a month that holds, by my latest count, nine painful days I directly associate with my sister. (To list them: her birthday, the last day I hugged her, International Survivors of Suicide Loss Day; the day in 2010 she got her first flashback that became the starting point for her debilitating PTSD; the last day I spoke to her; the days she died; Thanksgiving; and the day of her funeral). Each year, a different day out of this list will bring the worst pain. At first, these differences startled me and made me feel insecure. Now I can recognize and breathe through the worst of the despair and not be as startled by the volatility of my emotional reactions to these anniversaries.

In my fourth year of grief, I faced some difficult life decisions and decided to change careers. I had been a college professor, a job I often enjoyed, but I felt helpless watching so many of my students struggle with mental health conditions. There was also little room for my grief as a professor. I had to turn off my grief and my personal story every day, which meant the sadness begin to build up inside of me without an escape. I stepped away from academia and changed my focus to suicide prevention.

I now volunteer for numerous suicide prevention organizations in Colorado. Changing careers has been challenging, but it has offered me something that was becoming rarer each year: hope. Hope for me, as a survivor of suicide loss, and hope in how I see the world around me, where suicide can be prevented.

This year I attended the American Foundation for Suicide Prevention’s “Our Journey Continues: Long-Term Survivors of Suicide Loss” conference in Chicago, where I met “long-term survivors.” Although I do not yet see myself as a long-term survivor, I know to look toward those further along in their grief journeys for guidance, especially those who speak about their loss with a sad and loving wisdom. I hope to be more like them one day.

I am neither recently bereaved, nor am I yet a long-term survivor of suicide loss. As a sibling survivor of suicide loss who has survived the first four years, I think of myself as a mid-term survivor. My grief becomes more intimate each year, and I am no longer surprised by the distance that separates me from those whose lives are not marked by suicide loss. I have learned about the challenges of complicated grief and about the benefits of post-traumatic growth, a term that refers to how some people, faced with a traumatic event can be changed in radically positive ways. Whenever I have to make a tough or scary decision, I tell myself: Surviving Danielle’s death is the hardest thing I have ever done and will ever have to do; I am therefore strong enough to make any other hard decision that crosses my path. Recognizing my own strength and calling upon Danielle for support, I can make decisions more decisively and confidently than before.

I can no longer pretend my survival is a small part of me. It is me, and it is part of every aspect of me, of every breath I take, of every sleepless night, of every struggle to find meaning in my loss. Losing Danielle meant my entire life – my past, my present, and my future – has been undeniably changed. I will forever be a survivor of suicide loss, and Danielle will forever be my sister. I cannot yet imagine a long-term future without Danielle, but I find strength in knowing I have come this far and continue to survive, even on the hardest of days. Above all, I know Danielle is proud of her big sister. 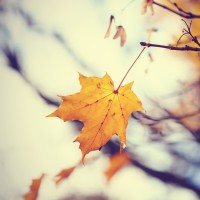