6 Ways to Talk About Testicles and Testicular Cancer

My last post was all about how talking about cancer can be awkward for those who aren’t experiencing it personally, but talking about testicular health as a survivor can be just as hard. I’ve also shared about some excuses guys may use to avoid doing a self-exam regularly. The topic of testicles can be considered impolite, even if it’s coming from a place of education.

One of the primary goals of A Ballsy Sense of Tumor is to get these “private” conversations out in the open — but that’s easier said than done. So to help, a la Barney Stinson’s Playbook from “How I Met Your Mother,” I’ve crafted various ways to bring up self-checks and testicles into everyday dialogue, based on some real life experiences.

While mowing my yard a few weeks ago I saw my neighbor gearing up to do the same. He’s about my age and we’ve only talked twice. We started chatting about my upcoming wedding and honeymoon. I said something to the effect of, “After facing cancer this year, I really need a Hawaiian vacation.” It was easy to weave the topic in naturally. Knowing his age put him at a higher risk for testicular cancer, I segued into telling him to do a self-check. He looked at me and said, “How? I’ve never even heard of that.”

This anecdote is what sparked this whole blog post. While it was relatively easy to bring testicular health up in conversation, it proves there’s still work to do with raising awareness. It’s not enough to simply say to do a self-check; men need to know how to do them too.

I told my neighbor the steps:

Place your index and middle fingers under the testicle with your thumb on top.

Firmly but gently, roll the testicle between your fingers.

Repeat on the other one.

After sharing this he actually thanked me, even though it was a semi-awkward third conversation.

Use these celebrities to get a conversation going. See them on the cover of People magazine or on the scrolling banner thingie on the bottom of the screen on “SportsCenter”? (I don’t watch ESPN much). Point it out and say, “I had testicular cancer, too. Do you know how important it is to do regular self-checks?”

Whoever you’re talking to will now have two connections to testicular cancer — the celebrity and you. If you follow it up with a how-to if necessary, it will make that person much more likely to keep up with their self-check schedule.

Stay strong, brother. While on our Hawaiian honeymoon our tour bus driver, Hanalei (Henry in English) asked my wife Mallory and I what we were celebrating. We said we were on our honeymoon and also celebrating my good health. With a quizzical look, he asked, “Have you had some medical problems lately?” This question gave me a perfect opportunity to bring up testicular cancer, educating not only him but also others who were on the tour. 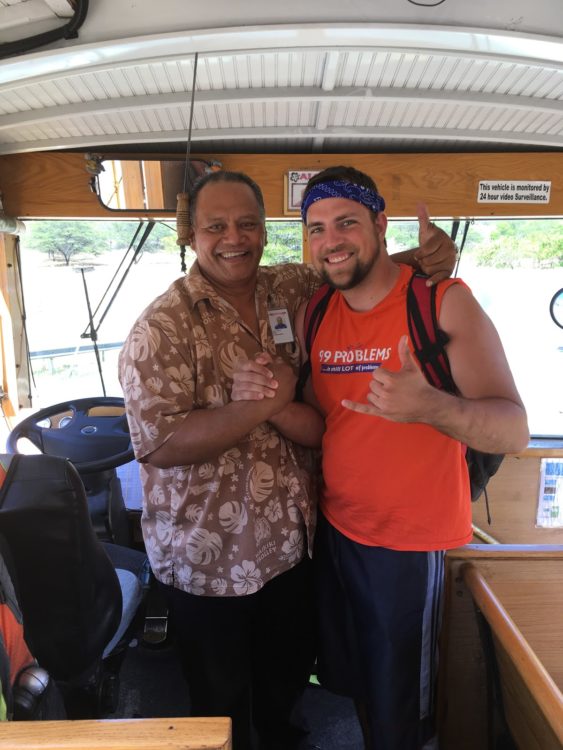 It turns out he is a 10-year stage 4 lung cancer survivor. I would have never known if he didn’t ask the question. You might not always have someone asking you a question that segues nicely into a discussion about testicular cancer, but you can ask them a question about their health if you feel comfortable.

Sometimes it might be as simple as asking after their well-being. After truly listening you can then share your own story, making sure to include the relevant self-check information so your listener can take action.

The morning of my wedding one of my groomsmen said, “Can’t you get testicular cancer from getting kicked hard in the balls?” After berating him for not reading my blog enough I told him that myth comes from people realizing something is wrong after getting kicked down there.

I used this as another opportunity to yet again rehash how to do a self-check. There are a ton of myths and misconceptions (I personally like the portmanteau “mythconception”) and dispelling these can be a way to get a conversation flowing.

After discussing this with him I gave him a swift kick… obviously to help him remember to self-check.

I’ll never get sick of it.

It’s sometimes hard to have such a stiff conversation and it’s certainly not a ball to do it, but you would be a nut to not sack it up and do it. Don’t get teste about it.

One of the only good things about testicular cancer is that it lends itself to many puns and jokes. How many did you catch in the opening sentence? Hint: there are at least five! Words related to testicular cancer all form perfect jokes. Bonus points if you have a pair of sunglasses handy and live in Miami.

When I write my book I’m sure there will be a chapter dedicated solely to testicular cancer puns. Find an opportunity and work it in — the humor will lighten the conversation enough so you can get serious without making things too awkward.

Case in point: as I wrote this post I was sitting in an airport. Apparently my carry-on was too large for the overhead compartments. The counter agent said, “Sir, can you check your bag?”

Of all my recommendations, this is my personal favorite. Why? It helps destigmatize talking about testicles (or TesteTalk… hold that thought as I run to the U.S. Trademark office). It’s straightforward and to the point. It helps make it acceptable to talk about balls in public.

For this approach, lead right off with a direct approach. Around when I was diagnosed and received numerous texts asking if I was OK, I countered with, “Have you (or your husband/fiance/boyfriend/brother/dad/grandfather/male robot) done a self-check recently?”

While it may have initially caught the person off-guard (especially those who were merely being kind by checking in) I had their attention. From there I explained how to check. Directly connecting to my (or your) own personal experiences with testicular cancer can be much more powerful than a more socially acceptable but less helpful reference.

Yes this approach is blunt (I don’t think anyone would ever accuse me of subtlety), but it helps get those conversations out there, which is what we really need.

If you’re still feeling unsure about gabbing about your gonads I’ll just say this to you: you survived testicular cancer, so you can survive a semi-awkward conversation that may help prevent someone else from having to do the same.

Once you get the ball rolling I think you’ll find talking naturally about testicular health isn’t a hard nut to crack.

Share
or  Copy Link
Link copied to clipboard.
Be first
9