Khalid, a singer-songwriter featured on Logic’s suicide prevention song, “1-800-273-8255,” recently opened up on Twitter about this own mental health, which started a conversation among his followers.

“Mental health is so important man,” the 19-year-old wrote. “I’m not feeling the best rn and my anxiety is super bad, love u guys.”

I’m not feeling the best rn and my anxiety is super bad, love u guys

He said he was struggling with feeling down, and wanted anyone with an illness to know that it gets better. “I feel you,” he wrote.

For the past few days I’ve been feeling very down about a lot of shit, and i just wanna let u know that if you struggle with any illness, I feel you. It gets better.

He started responding to fans who shared their own mental health stories. Twitter user @kerry_browne said, “I was told I was high-functioning for someone w/GAD & Depression. I ran often to clear my head. Eventually decided to go to therapy. Even went on medication. All of these things played a role in helping. However, the thing that helped the most was not hiding it.”

I have clinical anxiety so I know how you feel baby. Everything’s gonna be just fine. Take a break if you need it. Your supporters will always take care of you no matter the distance❤????❤❤

wanna know something?? I was in treatment for a year and recently discharged and my mom got me ur album as a “good job” gift and when I was struggling I would listen to ur music. thank u so much

When Logic’s song “1-800-273-8255,” which also features singer Alessia Cara, first came out, Khalid tweeted the song was special to him because many of his friends struggle with mental illness.

Having many friends who suffer from mental illness, this song is special to me. I’m so appreciative that I got to speak to them through song

According to the National Alliance on Mental Illness, half of those who have a mental health condition develop one by age 14, and three quarters by age 24. Research published by the Physicians for a National Health Program found that black youth are about half as likely as their white counterparts to receive mental health care, despite having similar rates of mental health problems.

As a young black man using his platform to be honest about his own mental health, Khalid’s involvement in projects that spread suicide prevention is important. Keep it up, Khalid — we appreciate the honesty.

Share
or  Copy Link
Link copied to clipboard.
Be first
390 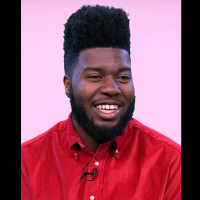