Finding My 'Calling' in Life With Schizoaffective Disorder

But I never believed I could do that.

See, I have schizoaffective disorder, which is, as I understand it, bipolar disorder with a side helping of schizophrenic-type intrusive thoughts. As a result of this particular cocktail of things going on in my brain, I find it hard to be calm at any point for myself, much less for others. That being said, that is not all I have.

I was born singing. A few months after I came into the world, my nana heard me babbling “Twinkle, Twinkle, Little Star” from my crib. This was months before I could talk. I couldn’t stop singing if I tried. I also discovered I could play piano at the age of 12, and began writing songs shortly afterwards. A ukulele came into my life in 2010, and I haven’t looked back.

For years, I tried to make the music that flows through me into something it is not. I hoped that people would get up and dance to it, but instead they… fell asleep? This bothered and somewhat offended me. I didn’t want to put people to sleep! That meant I was boring.

I was confusing something crucial. There is a difference between something boring a person and something soothing them, and what I didn’t know was that the songs could calm people so much, they would stop having anxiety attacks. I didn’t realize this was what I had always wanted until it clicked one day. I had found my niche. I could calm people. My music could do what I alone could not. And with it, I am free.

So what I am saying is, your calling will come. Be patient with yourself, and keep exploring! 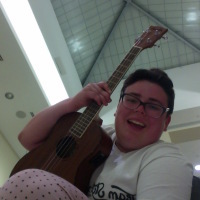