How I Learned to Stop Fearing Suicide Attempt Survivors

It was about a year after my son Noah’s suicide, at a conference for survivors of suicide loss, when I first heard someone describe what led to their own suicide attempt. My hackles bristled so fiercely I couldn’t take in the details. I resisted being dragged inside that bleak and scary place, as if despair were contagious and another person’s suicidal thoughts could infect me.

I didn’t want to hear stories that reminded me how Noah, too, may have had thoughts of being unworthy, of disappointing his friends, of no longer enjoying what he used to love, of feeling like his brain would explode. The trauma was still too fresh, my grief too all-consuming at the one-year mark. While trying to lift myself out of the hole, I couldn’t bear the burden of another person’s desperate story. I needed a safe place, and stories of attempt survivors were way outside the bounds.

Besides, I was jealous, especially of young people who had tried suicide and survived. Why couldn’t my 21-year-old kid have called that crisis line or “botched the job” or had one sustaining thought so he’d still be alive like you? Why couldn’t Noah have had your resilience or good sense or just dumb luck at his lowest moment?

Over the past few years as I’ve learned more about suicide and heard more accounts of would-be suicide, those stories have lost some of their terror. The shift has come with time as I’ve become steadier on my feet. With exposure to the worlds of suicide attempt survivors, the shock and fear factor has worn down. It’s come through getting an intimate, moving glimpse into the hearts and minds of attempt survivors through the work of Dese’Rae Stage, who features portraits of brave, articulate folks from all walks of life through her organization, Live Through This, and whose own story, along with others, is featured in the excellent documentary, “The S Word,” by Lisa Klein. Des’ speeches and blog, and Lisa’s deeply moving film, as well as the poignantly named Project Semicolon (“your life is not over yet”) have opened a window on suicidal thoughts and suicide attempts with such love, honesty and even humor, I no longer have to look away.

I’m proud to come together in common cause with attempt survivors at suicide prevention activities and fundraisers, like the American Foundation for Suicide Prevention’s Out of the Darkness walks. We each wear differently colored beads to represent our connection to suicide — for different types of loss, for attempts, for ongoing struggle with suicidal thoughts — but all of us wear the color for those who advocate for suicide prevention.

Just as the paths of attempt survivors and loss survivors converge at the walks, so, too, are we all haunted in some way by the specter of suicide. We want to throw off the shame and stigma that taint our personal histories. We dread anniversaries and other triggers, push away nightmare memories. Some days, we stumble around in the deep gloom of our minds. Whether attempt survivor or loss survivor, we need to remember we’re not alone and that our lives are not defined by suicide. We need to try to hold our shattered souls in the light, even if we feel engulfed by darkness.

I’ll always be searching for clues for what happened to my son’s beautiful mind. I hope I’ll continue to learn from the experience of attempt survivors, and I hope they’ll learn about another side of suicide from loss survivors like me. I’m so glad the attempt survivors I’ve met decided to “stay” and are speaking out; maybe when they hear my story, as in my grief memoir, “I’ll Write Your Name on Every Beach,” they’ll be glad they spared their loved ones the nightmare of suicide grief. We all need to share our stories to better understand the beast of suicide and protect ourselves and others from its ravages.

Follow this journey on Walking the Mourner’s Path After a Child’s Suicide. 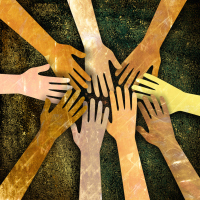