Anxiety Makes Me Constantly Compare Myself to Others

Her hair was long and blonde. Mine was short and mousy. She was athletic, outgoing, popular. I was lucky if I had enough strength to leave the house. While her phone buzzed in her hand, nobody was texting me. The only person that called me pretty was my mum. Why did I compare myself so much to this girl? Because everyone else did.

Every family gathering, every Facebook update, every phone call from a relative, I was being force fed information about my cousin, Kayla. I should have been proud of her, happy for her – and I was – but the way it was always presented as a competition between us — one that I was always losing — made me horribly jealous.

I’ve always had a difficult relationship with my dad, and he made it pretty clear that he’d love to change so much about me, despite me being his daughter. He criticized the fact that I wasn’t athletic like him, like Kayla was. He didn’t like that I cut and dyed my natural blonde hair that had turned mousy by secondary school, while Kayla’s hair never turned a shade darker than her natural Daenerys platinum. I wore jeans and trainers while Kayla cascaded around confidently in floaty pink tops and skirts, getting double takes and compliments everywhere she went. I wasn’t stereotypically girly, but you know who was? Kayla. Was Dad trying to turn me into her? Did he not like me as I was? Did I have nothing to offer because I wasn’t like her? Did he wish Kayla was his daughter instead of me? I spent years swaying in and out of forcing myself to be someone I wasn’t and defiantly being myself all for his validation that I was good enough. I never got close. Her successes and favorable qualities were constantly compared to my flaws — used to belittle me. I was a mess, I was a failure, I was unlovable, because I wasn’t Kayla.

This toxic mindset destroyed my self-esteem and followed me into adulthood. Terrified and intimidated by every woman I met, I’d notice all their merits to compare against my faults, storing them in my mind to cry later about all the things I didn’t have and all the things I’d never be. Feeling unworthy, ugly and useless in the presence of anything who I felt had something I didn’t. I’m terrified of being under water, but that girl can scuba dive? She’s obviously better than me and that’s why they’re all talking to her instead of me.

I’m far too insecure in relationships, moulding myself into my boyfriends ideal partner is a weak attempt to subside the anxiety of them finding someone better (so, anyone really) and moving on. It’s a deep rooted subconscious effort to be just like Kayla again, because the only way I’ll be liked is by being nothing like myself. My boyfriend is an engineer, whereas I can’t even stick two Lego bricks together, and I’ve had moments where I’ve felt so low about myself that I’ve screamed and cried all night at the intrusive thoughts that play over and over in my head of him connecting with another woman over a common interest I know nothing about. Forget the fact that relationships are built on so much more than that – if he wants to go out clubbing when I’d rather not, he’ll just find another girl to go out and dance with, he’d be happier with her anyway. It has gotten to the point where I’m scared of my boyfriend leaving me for non-existent women that I’m bending over backwards to change who I am – to be his Kayla. I couldn’t get my Dad’s approval, and to get closure on that I’m desperately trying to get any man’s approval that I’m just as good as Kayla, maybe even better.

I’m slowly learning to love myself, but the constant comparisons to other women has left me hurt, insecure, bitter and jealous. It’s a learned behavior now, something I am trying every day to unlearn. I’m trying now to accept, instead of deflect, compliments. I will remind myself of all the reasons I’m great, without needing to be anybody else. I was told once that while you’re looking at someone, wishing for the things they have that you didn’t, that they could be doing the same to you. It’s common to not be happy in our own skin, but we shouldn’t get so caught up on what we don’t have that we forget what makes us great. I’m learning that I don’t have to be Kayla any more, I never wanted to be her. I want to be Zoe. 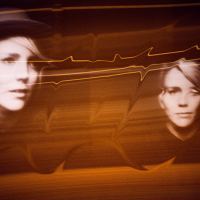