My little sister, who is nearly as passionate about cancer awareness as I am, has been part of numerous Relay for Life events, and she’s not even 18 yet.

On the other hand, I’m 26 and had never attended one, despite cancer being a part of my life even before my diagnosis (remember this point — I’ll come back to it later). I knew Relay for Life included a ton of walking, raising funds for the American Cancer Society, and raising cancer awareness, but otherwise, I didn’t know much at all.

Earlier this fall, I received an all-staff email from the team captain of the Relay for Life team at my school. She wanted to take a break this year and needed someone to be the new captain. I volunteered since someone who has never attended an event is most qualified to become the captain (obviously). To be fair, I do only have one ball, which is a qualification, I believe.

I could fill this post about attending team captain meetings to get ready for the big event on April 21, 2018, at Massaponax High School. I could talk about how many steps I took (over 20,000 for a total of about 9.5 miles, according to my FitBit – yet still a far cry from what Rob Harvey will be attempting in a few months). I could share about the escape room my team led twice (with the record being 11 minutes). I could captivate you with the tale about how I won a grill in a brutal silent auction that came down to a blind bid against another team captain, which ended in a tie but my opponent let me have it “since I am a survivor.”

But this isn’t what Relay for Life is all about.

Relay For Life is to celebrate cancer survivors.

The first lap for Relay for Life is the survivor and caregiver lap. Each survivor’s name is called individually and they are presented with a balloon. Their caregiver is invited to join them on the lap as they kick off the 12 hours of walking around the track.

Having a last name like Birckbichler ensures two things: it will be one of the first called alphabetically, and it absolutely will be butchered in pronunciation every single time. When “Justin Brickbirchlir” was called, I wasn’t even near the track, since I was looking for my survivor sash, which I couldn’t find in my cancer survivor gift bag.

Each survivor is given a white sash that proclaims their survivor status. I thought I had overlooked mine in my bag, but upon closer inspection, I realized my bag was lacking one. (I do also realize this also describes my scrotum.) Resigned to not having a sash, I took my lap, as my mom joined me.

While I was taking the cancer survivor lap, I noticed one guy was walking alone. I joined up with him and asked him about his experiences. He said he also had testicular cancer but didn’t need further treatment beyond his orchiectomy. He shared that he didn’t feel like he should have been in that survivor lap, but in my opinion, he had every right to be there. Not having chemo doesn’t make his experience any less significant.

After completing the lap, I was determined to get my sash. I never received my letterman’s jacket I assumed I’d be getting on remission day, so I wanted my sash. I went up to the Survivor Team Lead Coordinator, Tammy, and spoke with her. She’s an awesome woman and she got me my sash. I also decided that I’m not much of a sash guy, but it perfectly fit as a headband. Party on, Garth.

One of the other special Relay for Life events that Tammy organized for the cancer survivors was a special luncheon for survivors and caregivers. It was completely free and was delicious, but it was more than just a meal. There’s a level of camaraderie among cancer survivors that I couldn’t possibly capture in a blog post. Being in a tent with a bunch of fellow survivors was uplifting. We had all defied the odds and showed cancer who was willing to keep surviving.

Tammy also arranged for each cancer survivor to receive a free gift. I had donated a few books I had bought when I was determined to regain the ability to read post-chemo brain but had never gotten around to reading. I wrote printed labels (since I have terrible handwriting) with an inscription in each one. I included my contact information and hope to hear from whoever picked these books.

I personally selected a nice assortment of pencils made from tree branches, which will be a welcome addition to my workshop. Again, it wasn’t the gift that mattered — it was the dedication Tammy put forth. She said it was her ninth year doing it, and she truly made every cancer survivor feel like a rock star, which I guess makes me Rod Stewart.

Some Guys Have All The Luck, but after lunch, I couldn’t stop thinking about the conversation with my new testicular cancer friend. While we were talking during that first lap, I learned he basically said, “I Don’t Want to Talk Talk About It” at first and put off going to the doctor for a while. I guess he realized if he wanted to stay Forever Young, he had to make a call to nurse Maggie May. This discussion sparked a mission for the rest of the day.

Relay For Life is to fight back against cancer.

My latest project with testicular cancer awareness is a research study about men and their experiences with testicular exams at the doctor’s office. At this point, I’m going to ask you to fill it out at the link below.

If you don’t have testicles yourself, the direct link to the survey is bit.ly/absotdoctorsurvey, so please pass it on to your sons/husbands/boyfriends/uncles/male dogs/etc. (You can also snag a copy of the graphic here.)

Now that you’ve completed (and/or shared) the survey, we can keep talking about Relay for Life. Knowing I had my cool survivor bandana on and the event was all about cancer awareness, I decided I would take The Blunt Approach from “Six Ways to Talk About Testicles” and give the survey to literally any guy I saw along the way. I probably talked with well over 50 guys, and their answers to the survey all varied. I’m not ready to release the results yet (seriously, go share it so we can have a solid sample size), but it’s definitely eye-opening.

I talked to all sorts of males — from high school students to a Vietnam war veteran. The Sheriff’s Department had a team, and I interviewed each of them in turn. I also administered the survey to the Miss Relay contestants, who are men who dress up in drag as another fundraiser.

Out of all the people I approached, only two guys outright said they didn’t want to participate. I didn’t press the issue, and despite that, I was happy to see that the vast majority of the men were open to talking about testicular cancer and self-exams. Shows me that things are slowly changing for the better, which is my goal in April, the designated month for testicular cancer awareness.

If a man said he didn’t know how to do a self-exam or how frequently to do one, I told them how to do it and to repeat monthly, and sealed the deal with an ABSOT bracelet. I didn’t have my fake testicles with me, but one person had two Dum-Dum lollipops, and, well, one thing led to another. Just add it to the growing list of foods I have reimagined as testicles.

I’d say that I definitely grabbed the moment by the ball(s) and used Relay for Life to spread some awareness about testicular cancer.

Relay For Life is to remember the fallen.

When it comes to cancer, it’s not just all about celebrating the survivors and talking about balls. Unfortunately, there is a somber side — those who we lost to cancer. A big part of Relay for Life is the luminary ceremony. I didn’t purchase an “In Honor Of Justin Birckbichler” bag, and I dissuaded others from doing so, since I am still here, and I wanted any money to go to remembering those who are no longer with us. (My mom did end up suggesting a bag to remember Lefty.)

As I’ve said numerous times, my grandpa was the first real experience I’ve had with cancer and my first close family member who passed away. He’s a big part of the motivation for what I do with ABSOT and his mantra of “Just tell me what I need to do and I’ll do it” was what kept me going during chemotherapy. When I was buying luminary bags for other colleagues, I purchased one for him too. Later that evening, I set it out on the track along with the hundreds of others, and all the participants began the silent remembrance lap.

While other Relay for Life laps were fun and filled with laughter and pumped up music (though there was a distinct lack of TayTay), this lap was quiet, with soft music playing in the background. My mom and I walked the lap together and went we returned back to our area, we stood in front of Grandpa’s bag, just staring at it.

“I miss him every day,” I said as I wrapped my mom in a hug.

We stood there for a few more moments and I reflected on all the lessons he taught me. I know how to tie a tie because of him. I can golf (albeit, not well) because of him. I have a stronger resolve because of him. I remember calling him on the phone driving to and from college, just to talk. I truly miss him every day. Despite all the good I try to do with cancer awareness and the positive changes in my life I’ve made since facing my own battle, I would trade all that away in a heartbeat if I could just have one more moment with him. 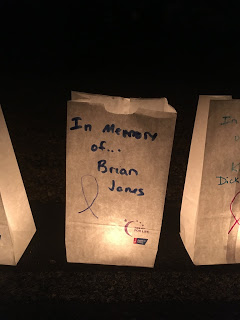 As I sit here drafting this on the verge of tears (and by verge, I mean there are some welling up), I can’t help but think of the scrolling screen of names that followed the silent lap. Sometimes, there were multiple different first names that shared one unique family name. I can’t even begin to imagine how they feel, losing so many to cancer. 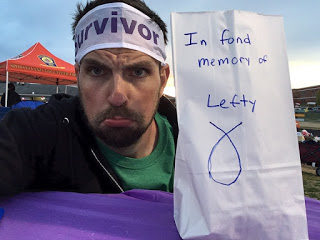 My future plans with Relay For Life:

At the end of the day, both literally and metaphorically, I was not interested in the amount of money that was donated at Relay for Life. While the American Cancer Society does a lot of good with the money it raises, there’s a picture that’s bigger than the research, patient support services, and funding. To me, it’s about celebrating the cancer survivors, fighting back against cancer and remembering the fallen.

Next year, I’m not sure if I want to be team captain again. The woman I “took over” for did an incredible job being the de facto team captain, and I think my time could be better spent elsewhere.

I want to help with the survivor team. As I went on and on about Tammy in the beginning, I couldn’t help but think about how it would be great to give back more. I plan to talk to her at our wrap up meeting and see how I can get more involved.

To those who have been impacted by cancer, check out where the nearest Relay for Life is for you. It’s more than just raising money and walking laps… it’s truly an experience.

This story originally appeared on A Ballsy Sense of Humor.