Sen. John McCain (R-AZ) has died of cancer at the age of 81, according to a statement released by his family on Saturday. On Friday, McCain’s family announced he would be discontinuing treatment for glioblastoma, an aggressive form of brain cancer. The senator was diagnosed with cancer last July and remained in office throughout his treatments.

My heart is broken. I am so lucky to have lived the adventure of loving this incredible man for 38 years. He passed the way he lived, on his own terms, surrounded by the people he loved, in the the place he loved best.

McCain was re-elected to a sixth term in November, and would have turned 82 in four days, on August 29. Towards the end of his life, McCain was hailed as a health care hero for his vote against the Graham-Cassidy bill. Last September, he announced he could not, “in good conscience,” vote for the bill — a GOP’s effort to repeal Obamacare.

Talking to correspondent Lesley Stahl about the status of his brain cancer diagnosis in September, McCain said, “I am more energetic and more engaged as a result of this because I know that I’ve got to do everything I can to serve this country while I can.”

This article will be updated as more information becomes available. 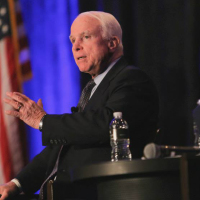