5 Things to Know About Growing Up With a Mental Illness

I have taken prescription medication for my mental illnesses every day for the last 15 years, since I was 9 years old.

I have been mentally ill for as long as I can remember. Along with a genetic predisposition for anxiety and depression, I experienced so much trauma in my early childhood and adolescence that my mind simply could not hold together under the pressure. I was diagnosed with obsessive-compulsive disorder (OCD), generalized anxiety disorder (GAD) and depression, and began taking SSRI medications when I was 9, exactly 15 years ago. I was later diagnosed with post-traumatic stress disorder (PTSD), panic disorder, and attention-deficit disorder (ADD). While I have changed the kinds, frequencies and dosages of medications more times than I can count, I have not been off medication since that day 15 years ago. These are the things I want people to know about my life as someone who has never experienced a life free from mental illness or the need for medication.

1. I would rather not be mentally ill or take medication.

I hear the comments, the accusations, the judgments. I hear them in the comments sections and in conversation and in interactions. I know people assume these medications should be temporary, that they are unnecessary and they are poison. Believe me, I wish I could live life free from these burdens. I wish I could spend the night with friends without having to carry my medications with me. I wish I could go an entire month without a panic attack. That is not my reality, though, and sometimes the accusations sting, no matter how much I know I need these medications.

There is this belief in our society that children are put on medication because they are problematic for society and the people in their lives. This could not be further from the truth. I am an overachiever, a perfectionist, a writer, a compassionate person with a big heart, valedictorian, an honor-roll student, a scholarship recipient, a professional. My illnesses have complicated my life, but they have not held me back. I was not put on medication because I was causing problems; I was put on medication because I was miserable. I was scrubbing my hands until they bled. I could barely go to school and could not cope with being out in public for long. None of this made me a problem, but it certainly made life difficult.

3. Managing mental illness as you grow up is difficult.

If puberty is difficult for everyone, imagine those brain and hormone changes when you are already mentally ill. Suddenly dosages that once worked are ineffective. The level of functioning I had experienced prior to the worst of puberty vanished. I became suicidal and self-injured so severely that I nearly ended up hospitalized. In addition to the normal stressors of adolescence, I carried my mental illnesses as a secret, avoiding sleepovers so that no one would see me taking my medications. I was bullied for being different, which made my illnesses worse. I changed medications frequently, with trial and error, until I finally found a life-saving combination and dosage at 22 years old.

5. I am more than my illnesses.

I love photography, my dog, drinking too much coffee, running through the rain, going on long hikes and sitting in the sunshine. I like to create and to share hope with others. I am a friend to many. I have a huge smile. I enjoy trying new kinds of food. I am a tenacious world-traveler who has no problem getting lost in a country where I do not speak the language. My illnesses are a part of my life, and sometimes they are debilitating, but I am not my illnesses. In fact, my illnesses are nowhere near being the most interesting part of me. Instead of judging or pitying me for my illnesses, please focus on how I survive and thrive in the middle of them. That is a far larger part of my life and identity.

I have been diagnosed and on medication for 15 years, since I was 9 years old. I have fought and grown and crashed and thrived. I look forward to the next 15 years.

Photo by Jordan McDonald on Unsplash 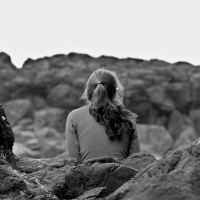