Why It's Important to Celebrate Surgeries Years Later

Talking about surgery anniversaries may be a little weird to some, but they mean the world to me. As I’m writing tonight, I’m emotional about one in particular. It sounds a little like a remixed Christmas story, so I hope you’ll bear with me.

You see, two years ago, I ate Chipotle, finished class at 1 a.m., tossed and turned all night and woke up at 6 a.m. to another adventure. Sound like the start of finals week or excitement of Christmas, right? Both events were close, but this wasn’t it.

Two years ago tonight, I ate pieces of a Chipotle burrito until midnight because Chipotle burritos are my go-to meals before surgeries since I can’t eat the day of. I also stayed up until 1 a.m. finishing a project because I’d be out of commission during finals. Not all of my finals were ready before surgery, but it turned out that I didn’t even need to take them because my hard work during the semester landed me with Bs in my courses before finals, one being statistics.

Just like any other surgery day, at 6 a.m. on December 13, 2016, I woke up with hugs from Mom. She asked me to wear a shirt with her favorite Bible verse on it: “I can do all things through Christ who strengthens me,” from Philippians 4:13, I finished getting ready, and we loaded up the car to make that two hour drive. I was going in for a replacement baclofen pump surgery. Although I’ve been through many surgeries before including this exact one, the car ride was silent and so was pre-op. Our strength was coming through our cracked voices as fear hid in the lump of our throats as it often does during times such as this.

This surgery definitely wasn’t as hard as my most recent or past surgeries, but it had its unique qualities. As I indicated earlier, this surgery was during finals week, but this wasn’t a normal finals week for more than one reason. This was the finals week before I graduated with my Associates in Behavioral Science degree. This was a finals week where I was questioning if I would recover in time to walk across the stage. This surgery was one that could not wait. This surgery is one that reminds me that a degree is more than a piece of paper. During this time, I realized that piece of paper holds a lot of strength, determination and sacrifice behind it. I learned that every event should be celebrated and remembered because they make us who we are.

I graduated a month later!

Share
or  Copy Link
Link copied to clipboard.
Be first
28 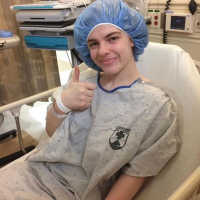