Why It Hurts When You Compliment My Weight Loss

“I’ve lost so much weight recently and can’t seem to gain it back, no matter what I do.”

I’ve been experiencing some pretty unexpected, prolonged and horrible gut issues for over four months now and I’ve had more conversations like the above than I’d like to admit.

The reason I don’t want to admit it is because they’ve all been friends and they’ve all meant well. But they’ve unintentionally hurt me a lot by suggesting I’m “lucky” for the trauma my body has been through.

Being thin does not mean I’m a “success story.”

I’m not the first person to be saying this, people fighting eating disorders and people fighting fatphobia have been beating the drum for a while. The idea that thin = good, fat = bad is a dangerous mindset for a lot of people.

Most people understand that drugs, poverty and illness can all cause unhealthy weight loss. Most also know that we put an inordinate amount of pressure on women to be small and that we shouldn’t put so much emphasis on their body and looks.

But we still do.

So I’m going to beat the drum a bit more, this time for myself, from the perspective of a sick girl who has been suffering ongoing GI issues and living in a personal hell for the last few months.

Please also note that I don’t think there is anything inherently wrong with being thin, and also, while my situation sucks, there are people with longer-lasting GI issues than me. This is just my story.

Firstly, and most importantly, I don’t want compliments for my thin characteristics.

I know people may not know that I’m ill and that my weight loss was involuntary and unwelcome. I also know many women strive to lose weight and because of that, the assumption is that any woman losing weight is a positive thing.

But this assumption that a person losing weight is a positive thing by default is super problematic for so many reasons. Outside of my situation, someone could be struggling with an eating disorder and hurting their body to get to that size, and the positive affirmations only further that issue (but that’s another story altogether).

My new thigh gap, my petite build and my chiseled jawline are literal symptoms of my trauma caused by my terrible physical and mental health.

I’ve actually wanted my multiple chins to go down to one my entire life, but not like this.

This thin face, my protruding hipbones, my non-existent ass, they are not mine. They do not belong to me. This isn’t my body but I’m trapped in it.

I have no control. 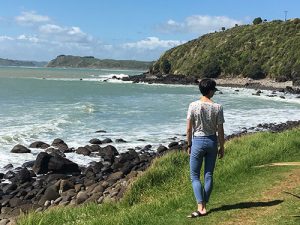 I haven’t felt sexy or attractive in months.

It’s hard to feel good when you have diarrhea every single day and are literally afraid you’ll sh*t yourself for two months straight.

You plan trips to shops based on what you’ve eaten that day, how fast you think it’ll move through your system and how quickly you think you can get there and back home.

You have to politely turn down team fitness classes at your work because you say you’re too fatigued, which is actually true. But the true fear sits in the fact you’re having nightly nightmares of losing control of your bowels in public. So you duck out and cry in the bathroom instead.

When you have to ask your boyfriend not to hug you too much because he’s squeezing your tummy dangerously tight. And when you insist on being big spoon to make sure your butt is not facing him overnight.

I’m saying this because it’s true, in a funny way – but like, a sad, funny way. My life turned to poo jokes overnight to deal with the fact that I feel so embarrassed that my life is being completely run by my bowels.

I also tried to stop my boyfriend from touching me at all. I felt hideous. I could see my ribs and hips and I felt so powerless and sickly. I cried when I told him I felt unattractive and self-conscious. He didn’t see it but I felt it deeply.

Doctors couldn’t tell me what was wrong.

They therefore didn’t know what I could and couldn’t eat. I was giving blood sample after blood sample, stool sample after stool sample. Answering personal questions, being doubted, going from doctor to doctor. Getting cameras stuck up me, and down me. And all they could tell me was what I didn’t have.

Now what I apparently have doesn’t even have a name. It’s just the way my bowel is as a person with a primary immune deficiency, and it’s acting up. Cool.

The bloating and cramping that came when I ate the “wrong” thing were unbearable.

I would end up writhing around in pain. Crying and trying to stand up, sit down, lie down, walk around, trying to figure out how to make it slightly less unbearable. Making myself a hot water bottle and putting a movie on in bed to try and distract myself from the pain and distress that this was my life now.

Not knowing what I could and couldn’t eat was another terrible hurdle. There are so many ingredients in a meal, and three main meals in a day. If you get these symptoms, how on earth do you figure out what’s causing it until you’ve done it three times and can be fairly sure. Three lots of cramping, bloating and diarrhea, every time.

So much fear every single meal – four times a day, seven days a week. Before, during and after eating. Preparing your own, or god forbid you go out and be at the mercy of a chef’s recipes.

It’s OK, I can’t eat most food on a menu now anyway. Chips again it is.

Oh and let’s not forget the hemorrhoids.

They’ve been haunting me on and off for four months.

I periodically couldn’t really do much, as my uninvited guests would arrive, then movement inflamed them and created more pain and more fear.

And, honestly, I felt so much humiliation that I could have such an “embarrassing” issue, on top of an embarrassing issue.

More crying, because it felt like such bullsh*t. It’s unnecessary salt in the wound.

One does not lose weight so quickly and dramatically, and into an unhealthy range without some serious problems happening to the body. This requires your calorie intake to be considerably less than your calorie output.

I was eating, but my body was rejecting it.

What happens when your body doesn’t take in any nutrients is that it starts to take energy from your fat stores, and then your muscles stores. It also does not prioritize your physical energy or mental capacity, when the most important use of your fat and muscle energy is to ensure your vital organs continue to work.

I felt such extreme fatigue that I feared not having enough energy to get the food I needed to get rid of the fatigue. Then when I got the food, there was no guarantee my body would accept it.

Sometimes I’d go day after day watching everything I eat disappear down the toilet without touching the sides, as if there was a tube straight down my body. All that potential energy gone.

On bad days I’m pretty sure I was starving and suffering malnutrition from not absorbing any of my food. But somehow that didn’t sound possible as it was happening in my nice apartment, full of food, financial stability, so much support and a full-time job.

My feet were cramping and small cuts weren’t healing. My mouth was full of ulcers and my gums sensitive and sore. I couldn’t concentrate or think straight. My body was small, tired and had no fight. If I had gotten sick or badly injured, I knew I’d end up in hospital.

It was terrifying and physically and mentally exhausting.

I’d end up eating porridge or banana on toast for every meal as I knew that would be more likely to go through my system slower (if something else didn’t kick it out). It didn’t seem particularly nutritious but it was something.

That is not a life.

A life run by fear, diarrhea, bloating, cramping, blood and stool tests, confused doctors, butt cameras, complicated diagnoses, hemorrhoids, not knowing what you can eat and fatigue, is not a life.

When your main life coping mechanisms are eating, drinking and exercising and you can do none of them, that is not a life easy to bear.

So please don’t compliment me on my weight loss.

Do you still want to talk about how great my weight loss looks on me, and how much you wish you had this problem?

Want my thigh gap and my jawline? Want this inability to gain healthy weight back?

I have news for you – you don’t. Not with what comes with it.

I want my island thighs. I want that bit where they touch in the middle. I want my chins that I don’t like. I want my ribs and hips to be soft. I want to only sort of suit my short hair, and not look like a proper little pixie. And I want to eat without fear.

I just want to be me.

There is nothing inherently positive about losing weight.

And therefore nothing inherently negative about gaining weight or being overweight. There are many ways that people can lose weight in an absolutely negative way.

Weight and body size is not an indication of “winning” or “losing,” and should not be used as a judgment of a person’s health or lifestyle.

If a person loses weight, there is no need to comment on it.

Maybe you could ask if you’re concerned and can handle the answer. But if you’re not concerned, maybe you could focus your compliments on their haircut, or clothing, or if they are kind, or strong, or doing well at work if you must say something.

As they say, the road to hell is paved with good intentions.

And no hard feelings if you were one of those people who said that to me. A lot of people have, just please, when you’re in a similar situation again with someone else, keep this in mind.

I’m pleased to say that I am in much more control over my gut situation right now – it still leaves a lot to be desired though. I still have the mild diarrhea but without the threat of incontinence. The hemorrhoids are still visiting, just less frequently and aggressively. I only get the cramping and bloating when I accidentally eat the wrong thing, which isn’t often as I have a good idea of what I can and can’t eat now and am on an extremely strict and restrictive diet. I still can’t gain weight, but I’m not losing it. Probably still malabsorbing, but hopefully not for long as I’m on a new treatment pathway.

Cross your fingers for me. I want a real chocolate cake for my birthday.