Why I'm 'Diving In' for a Cure for Snyder-Robinson Syndrome

What does a cure for SRS mean?

When we talk about “curing” or “finding a treatment for” Snyder-Robinson syndrome (SRS), we mean specifically finding a remedy that will alleviate the medical complexities and symptoms caused by SRS. SRS is caused by a mutation in the SMS gene, which renders the gene unable to do its job of converting an enzyme in the polyamine pathway. The result is an imbalance of polyamines in people with SRS, which wreaks havoc on their bodies.

Polyamines are present in every living organism. Polyamines are necessary for normal growth and development. When the polyamines are not functioning, survival is impeded in animal models. For example, in one study, very few fruit fly larvae with SRS survive. The few that survive are not able to climb, and stay at the bottom of the tube. Their survival is limited.

Maybe it’s not surprising that very few people have been diagnosed with SRS worldwide. One of our advisors said that living without the essential balance of polyamines is a disease that is “not compatible with life.” There is a dearth of information about SRS, which means that it is impossible to know what a prognosis is until SRS is studied further and a natural history study is done.

My son Connor was the 21st person ever in the world to receive a diagnosis of SRS. Since that time, a total of 66 people have been diagnosed with SRS worldwide. The Snyder-Robinson Foundation (SRF) has implemented a natural history study that is already changing the description of SRS and will continue to do so as more people participate. Additionally, the research studies funded by the Million Dollar Bike Ride, the SRF in the last three years are illuminating the disease pathway of SRS. Other studies, including one being done by the Jackson Labs, are creating SRS animal models to better understand SRS and its phenotype.

In a drastically oversimplified explanation. What is understood about SRS is that the nonfunctioning SMS gene does not convert spermidine into spermine, which results in too much spermidine and not enough spermine in the cells. This imbalance creates a toxicity, and many bodily systems cannot develop normally under these circumstances.

SRS is neurodegenerative. The nervous system is compromised, including the brain, and the signals the nerves send to muscles, which results in epilepsy and hypotonia for people living with SRS. Many people with SRS are not able walk, talk, or eat by mouth or do so with difficulty. Gross motor and fine motor skills are hampered and result in developmental delays. The brain suffers insult which results in intellectual disability.

The development of the skeletal system is also impaired, resulting in low bone density, osteoporosis, scoliosis, and/or kyphosis. Many people with SRS have kyphoscoliosis and require intervention or oxygen to be able to breath when their internal organs become compressed due to the severity of the problem. People with SRS frequently experience broken bones, especially of the arms and legs, without a traumatic event.

Other bodily systems are also compromised by the imbalance of polyamines and resulting oxidative stress. The gastrointestinal tract also is impacted, and gastroparalysis, constipation, and other severe disorders can result in the need for J/G tubes to get enough nutrition. Many people with SRS have serious respiratory problems. Some have kidney issues. The SRS Natural History Study is revealing other systems that do not function adequately because they are impaired by the polyamine imbalance.

This is what a cure for SRS means to me: I wake up every morning not knowing if I will open Connor’s bedroom door and find him awake and happy or immobile and nonresponsive. When I have found him nonresponsive, his temperature was 95 degrees, he couldn’t talk or sit up, and it took all day for him to get back to his baseline. We were told he was in a post-ictal state, most likely after having a nocturnal seizure. His erratic EEG indicates he’s at risk for a multifocal seizure, so he takes anti-seizure medication twice a day.

This is what a treatment for SRS means to me: I try to make sure that Connor’s every move is guarded to prevent him from breaking a bone. With bone density that is far below even the bell curve for osteoporosis, he is at risk of breaking his bones from a simple fall. Before Connor’s SRS diagnosis, he suffered a fractured skull (and brain bleed), broken feet and a broken arm. Since his diagnosis, Connor’s already limited activities were severely restricted. He is no longer able to do recreational skiing, which he loved, therapeutic riding, which he also loved, and simple things like walk in the hallway during dismissal time with his peers.

To prevent further demineralization of his bones, Connor has infusions of bisphosphonates every three months. The infusions make him feel nauseated, cause bone pain and fever. However, we don’t even know if the infusions are helping his bone density. His spinal compression fractures were getting worse. His doctor explained that she only had one tool in her toolbox to combat his spinal collapse, so we elected to try it. He gets infusions meant for elderly women with post-menopausal osteoporosis. Connor is a child with a disease that is poorly understood, for which there is no treatment. We could be unknowingly exposing his bones to greater harm by using a treatment that may worsen his condition. If we find a treatment for SRS, we would know it would be effective at helping the osteoporosis caused by SRS, and we could protect people from SRS from the horrible pain and suffering caused by multiple broken bones.

I selected Connor’s seizure disorder and his osteoporosis as examples of some challenges people with SRS have. I want to emphasize that these challenges pale in comparison to the challenges other people with SRS face. Because Connor is my child, I can describe these well from my first-hand observations. What I have heard from other parents who watch their children suffer is at times harrowing and heart-breaking.

If you had a child who you saw struggling in the water and didn’t know whether they were able to swim, would you try to rescue the child? Would you get them a life vest? Dive in and save them?

When we say we want to #CureSRS, it means that we want to put a life vest on our children and if that doesn’t work, we’re diving in. 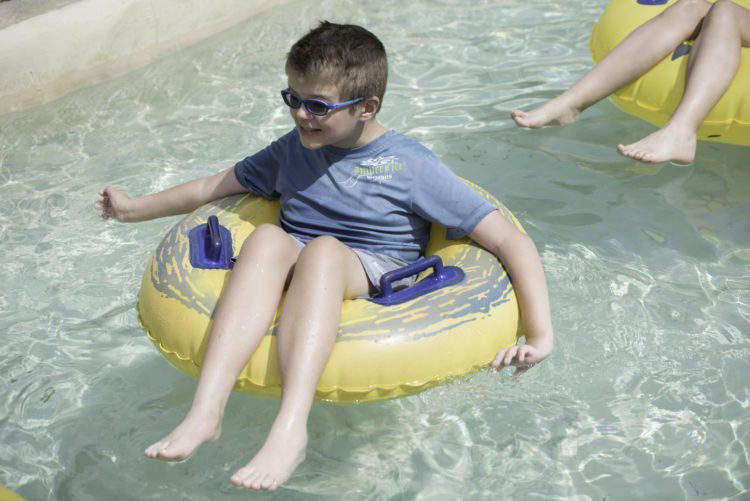 We realize that no one knows what fate holds in store for any of us. But we want to give our children a fighting chance.

Any parent would want to remove these horrible obstacles from their children’s lives. Our life vest happens to take years to create and the help of many people to accomplish in the shape of research, donations to fund the research, and a community of people coming together to make it happen. We are diving in.

Alleviating the complex medical issues from people with SRS would not change what we love about our ‘SRS Stars.’ Connor has become, through all the trials his body and spirit has endured, a fiercely determined person. He worked so hard to be able to walk when he was younger. Though he had many setbacks, he took his first steps and the look of joy on his face was indelible. Though he wasn’t able to talk much at the time and tell us, we could tell he was proud of what he had accomplished – he had managed to go from not being able to lift up his head to standing up and walking over the course of almost five years. In so doing, he had to overcome not only his low muscle tone, but his overwhelming fear of getting hurt.

Connor has the ability to look through the difficult and painful experiences and see the bright side. When he finds out we are going to spend the day at the hospital, he looks forward to the ice cream he will have afterwards and never mentions the pain and discomfort that he will feel while he’s there. He has a wonderful sense of humor and is able to bond with many people telling jokes and he warms their hearts with his laughter. He has impeccable manners that charm even the most grumpy person. Sometimes, Connor catches me off guard and thanks me for being such a “good carer” for him. He frequently tells me that I’m the “best mom a boy could ever have.” Connor is empathetic and able to understand the right thing to say to lift a person’s spirits. 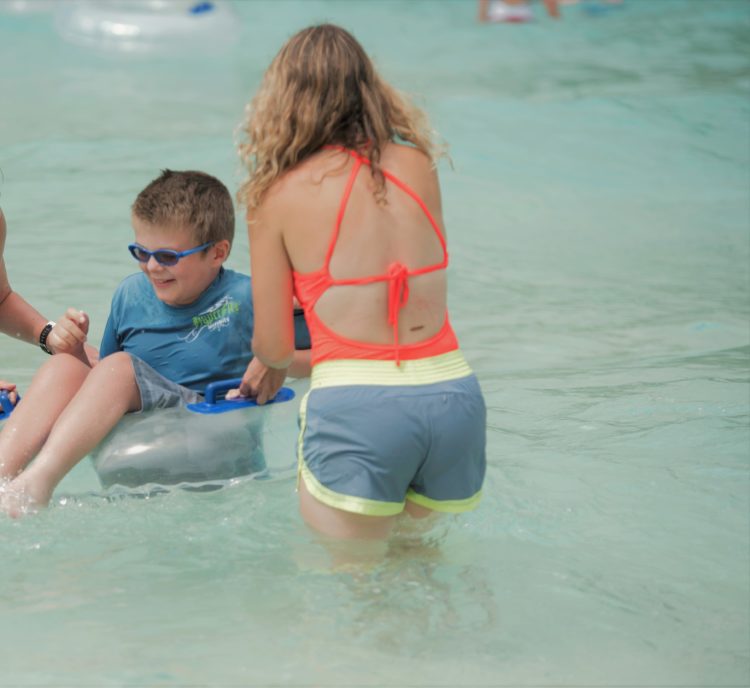 Connor has a capacity for love that is remarkable. He frequently expresses his love without reservation. He worries when other people are sad or hurt and tries to make them feel better. He compliments people and makes them feel happy because it’s so often unexpected and it’s always appreciated. For example, he once told a nurse who was administering his medication that she was “doing a great job.” She was so taken aback and tickled by his comment that she told me it made her not-so-good day much better.

Connor is not able to participate in most physical activities because he is not able to run, jump, climb, hop, swim, etc. He often remains on the sidelines while other children run and play, jump and swim in the pool. Connor has never once felt sorry for himself for his body’s limitations. He does not complain. He sits and claps and laughs when he sees the children playing. Recently, he was very sick with the flu and he, for the first time, expressed his unhappiness with feeling so poorly. He said, “I wouldn’t have chosen this for myself.”

None of this would change if there is a cure for SRS. I believe that Connor’s spirit has been challenged by his body’s limitations, and that it has risen to meet the challenges.

I want to #CureSRS because I want my son to stick around for as long as he can. I want to put a life vest on my son and all the people who ever have been or who ever will be diagnosed with SRS. I am diving in. 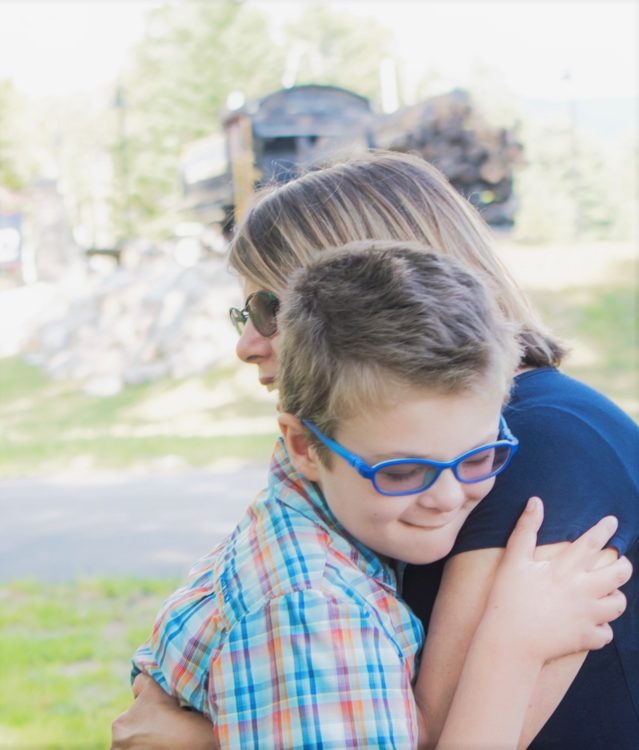 Share
or  Copy Link
Link copied to clipboard.
Be first
315