Whether you live with an undiagnosed chronic illness or simply experience an unusual symptom here and there, you’re likely familiar with how unpredictable Google search results can be. Did you bruise your arm, or do you have a fatal illness? According to Google, there’s a 50/50 chance it could be either!

If you know the struggle of googling your symptoms, you may relate to one of the songs on Dr. Henrik Widegren’s latest album, “Medical Melodies and Surgical Songs.” While  Widegren works as a phoniatrician (voice doctor) and ear, nose and throat specialist by day, he’s also a singer, songwriter and musician with a passion for medical music.

“I have always enjoyed singing, playing and writing songs,” Dr. Widegren told The Mighty. “A couple of years ago a friend started an after work [program] for doctors and nurses in our hospital, and we wanted to have some entertainment. So I wrote a couple of songs about life in the hospital.” He went on to release three albums in Swedish, with “Medical Melodies and Surgical Songs” being his first album in English.

The album, released on Monday, includes 13 songs about “life and death in the hospital,” such as “Text Message From the ER,” “It’s Always Good to Have a Stethoscope,” “There Is a Fracture,” “The Song of Romeo the Internist and Juliet the Surgeon,” as well as “Never Google Your Symptoms.”

“Never Google Your Symptoms,” was released as a music video on YouTube about a week before the album. The song tells the story of a father who is dying from hypochondria. From his deathbed, he offers his son just one piece of advice – to never google his symptoms.

The song includes lyrics such as:

That is my only prescription

You get a hundred diagnoses and medieval prognoses

If you google “cough” and “diagnosis”

You have got tuberculosis

And if you google “fever” and “red”

You’ve got Ebola and soon will be dead

And if you google “I’ve a runny nose”

And if you google “itch” and “prognosis”

You can watch the full music video below:

At face value, the lyrics might make it sound like Widegren is warning patients to never, ever google their symptoms. Combined with the catchy tune, white coats and playful nature of the video, however, the song takes on a different meaning.

“The song is meant to be comical and ironic,” Dr. Widegren explained. “I think that Google is a fantastic tool! I have had many patients that have come to me early because they googled their symptoms. But, on the other hand, Google also gives you the worst information. And I have met healthy patients that have worried themselves sick because they googled their symptoms.”

Googling your symptoms can be a double-edged sword. For many people, conducting their own research online allows them to stay informed about their condition, learn about new treatment options and connect with other people who have gone through similar experiences. Having the ability to seek out knowledge on your own can be empowering, and allows you to be your own advocate in the doctor’s office.

People with rare diseases may especially benefit from researching their condition online. While it’s true doctors generally have way more medical knowledge than your average patient, it’s impossible for every single doctor to have in-depth training on every single disease. There are an estimated 7,000 rare diseases; if an individual is struggling to obtain a diagnosis, turning to digital research or online communities can connect them to resources that would otherwise be hard to find.

Unfortunately, there is also a lot of false, conflicting and misleading information on the internet. How many times have you googled a minor symptom, only to discover you may or may not have 24 hours to live?!

Widegren said he wrote “Never Google Your Symptoms” after he had three patients in a row who were very concerned about their Google search results. “They were hoarse and if you google ‘hoarse voice’ you immediately find laryngeal cancer,” he said. “After a quick look, I could reassure them that they did not have cancer.”

While the old medical school adage tells doctors to look for horses, not zebras, when they hear hoofbeats, it’s still important to take patients’ concerns seriously and examine them thoroughly. Zebras may be rare, but they do exist.

Though the song was meant to be comical, Widegren said it has sparked an interesting debate about whether or not patients should be googling their symptoms. “I must stress that the song is not serious,” he explained, continuing:

Of course I think patients should seek information on the internet. But I think the song stirred up a debate because symptom googling is a game changer in the patient-doctor relationship and we have to learn how to deal with it and use it in the best way.

For example, some of my patients are embarrassed when they admit that they have googled their symptoms before they come to me. But I think that is wrong. If my patients have found worrying information on the internet, I want them to tell me straight away. In that way I can confirm or reject their suspicions and we will communicate much better!

Though the song may be playful and “not serious,” Widegren hopes it can have a positive impact on both patients and medical professionals and continue to spark important discussions. “I hope my album will bring doctors, nurses and patients entertainment, music, laughs and some thoughts about life in the hospital and healthcare,” he said.

“Medical Musings and Surgical Songs” is available for purchase on iTunes, Spotify or CD.

Share
or  Copy Link
Link copied to clipboard.
Be first
348 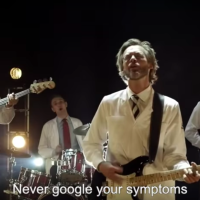