As a technology correspondent for the BBC, Rory Cellan-Jones often appears on-air in front of millions of viewers. So when people started noticing his hand shaking during broadcasts, he decided to go public with the reason behind the shaking — he has been diagnosed with Parkinson’s disease.

In a tweet posted Thursday, Cellan-Jones admitted people had seen his tremor in a recent segment, so he shared he was recently diagnosed with Parkinson’s, has mild symptoms and is getting treatment.

“I’m carrying on as normal. Onwards and upwards!” he wrote.

A couple of people have noticed my hand shaking in my live 5G broadcast today. So seems a good time to reveal that I’ve recently been diagnosed with Parkinson’s. I’m getting good treatment and the symptoms are mild right now – so I’m carrying on as normal. Onwards and upwards!

Cellan-Jones appeared on BBC Radio 5 Live on Friday to share more about his diagnosis. He said he was diagnosed a few months ago, which wasn’t a shock because he had “noticed a few things” changing over the last year.

He said his producer put the idea of sharing his diagnosis publicly in his head, since she and others had already noticed the tremor.

“So I just put it out there really wanting to be up front about it because some people were worried,” Cellan-Jones said. “A couple of people had actually contacted the BBC and suggested I should see a doctor and I’d already done that and I wanted to be frank about it.”

Parkinson’s disease is a neurodegenerative condition caused by the loss of neurons in the part of the brain called the substantia nigra, which normally produces dopamine, a neurotransmitter that signals other cells involved in motor control, emotion and goal-directed behavior. The lack of dopamine causes symptoms like tremors, slowness of movement, rigidity, gait and balance problems, depression, loss of smell, fatigue, and more.

Parkinson’s is most commonly seen in people over age 50 and gets worse over time, though it isn’t considered a terminal illness. Medication, exercise, physical therapy and a surgical procedure called deep brain stimulation can help manage symptoms.

Cellan-Jones said since sharing his diagnosis, he’s received many kind messages, including some from others with Parkinson’s. He encouraged people to be open about their diagnosis.

“I was with a great Parkinson’s nurse the other day and she told me about a client of her’s who’d been diagnosed really young and he’d lost his job because he began to slow down a bit and he hadn’t told his employers about it,” he said. “You need that information out there.”

If you’re living with Parkinson’s disease, it can feel like the people around you don’t understand what you’re going through — but there’s a whole community of others with Parkinson’s out there who can relate to you. You’re not alone.

First, take our survey to share your experiences with Parkinson’s disease. Then, check out these stories written by others in the Parkinson’s community:

Share
or  Copy Link
Link copied to clipboard.
Be first
289 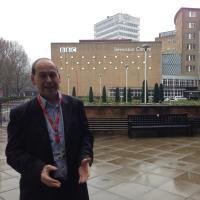